You cannot stop an oil tanker on a dime. It takes up to 4 kilometres before a tanker carrying 2 million barrels of oil comes to standstill.

Australian wages growth could be just like one of those tankers. The debate is whether it’s starting to turn or on course for disaster. 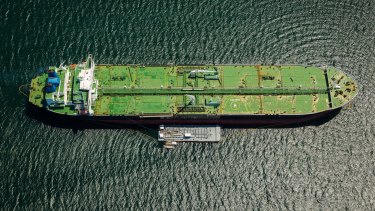 It takes 4km to stop a fully-laden oil tanker. It could take just as long to turn around years of slow wages growth.Credit:TIM RUE

The Reserve Bank has made clear its view about the importance of wages growth, as part of the broader narrative of inflation and the future pace of interest rate rises.

It believes wages have to be growing at better than 3 per cent annually so that inflation stays within its target band, which would then enable it to start normalising interest rates.

RBA governor Phil Lowe says there’s no chance of a rate rise next year with 2024 still the most likely outcome. But financial markets are betting he’s wrong, tipping higher borrowing costs for millions of mortgage holders by mid-2022.

The wage price index figures of Wednesday, however, don’t make the debate any clearer.

There’s a case in the figures for those who reckon it will be a cold day in hell before we see strong wages growth. There’s also a case for those who believe we’re about to go through a 1970s-like period of spiralling wages and inflation that will require higher interest rates the Friday after next.

The inflationistas can point to wages growth in the private sector which, at 2.4 per cent, is running at its fastest rate in 7 years.

Wages across the professional services sector hit 3.4 per cent, its best pace since the Gillard government.

There were also strong pulses in the big employing construction sector (2.6 per cent) while even in hospitality – hit hard by lockdowns in NSW, Victoria and the ACT – there were signs of strength.

Add in bonuses (like pizza deliverers being offered sign-on cash), the reopening of the economy and the shortage of workers in some sectors and you can persuasively argue the figures show wages starting to turn like our oil tanker analogy.

But for those banking on low rates for longer, the same figures back their case.

As Deutsche Bank noted, while wages growth in professional services was above 3 per cent, it was the only industry sector in that exalted club. A decade ago, every industry group was enjoying 3 per cent plus growth.

Of the 18 separate industry groups, 12 showed wages growth lower than the national average.

In terms of people, 60 per cent of Australians are working in these areas while another 10 per cent (education) were spot on 2.2 per cent.

While there’s growth in the private sector, it’s a different story for all those teachers, nurses, aged care staff and firefighters who depend on taxpayers for their weekly pay cheque. Wages growth for them over the past 12 months was just 1.7 per cent, with all governments seeking to keep a lid on this sector.

And no matter which way you cut it, 2.2 per cent is a long, long way short of the RBA’s stated target of 3 per cent plus.

The RBA knows the economy, being propped up by low rates, its own quantitative easing program and huge government budget deficits, will be standing on its own two feet when rates inevitably increase.

If rates don’t rise, that means the RBA and the federal government have failed the economy and the Australian people.

Just like an oil tanker not turning their ship in time to prevent an oil spill.