‘Well done Emma – here’s a snap of me eating a sausage roll!’ Twitter users mock Michael Owen’s congratulations to Emma Raducanu after he shared a 1998 snap of HIMSELF aged 19 with SPOTY trophy to mark her win

Twitter users have been mocking Michael Owen after the footballer shared a snap of himself winning BBC’s Sport’s Personality of the Year to congratulate Emma Raducanu.

The teenage tennis sensation, who lives in Kent, beat out athletes like Tom Daley and Adam Peaty to win the trophy on Sunday, making her the youngest SPOTY winner since another 19-year-old, Owen, in 1998.

The footballer shared a congratulatory message to Emma over the weekend, posting a photo of himself with his trophy and writing: ‘Congratulations to @EmmaRaducanu who thoroughly deserves to be crowned Sports Personality of the Year 2021.

However many Twitter users were left howling over his message, which some felt was a humblebrag, and went on to post references to their own lives. 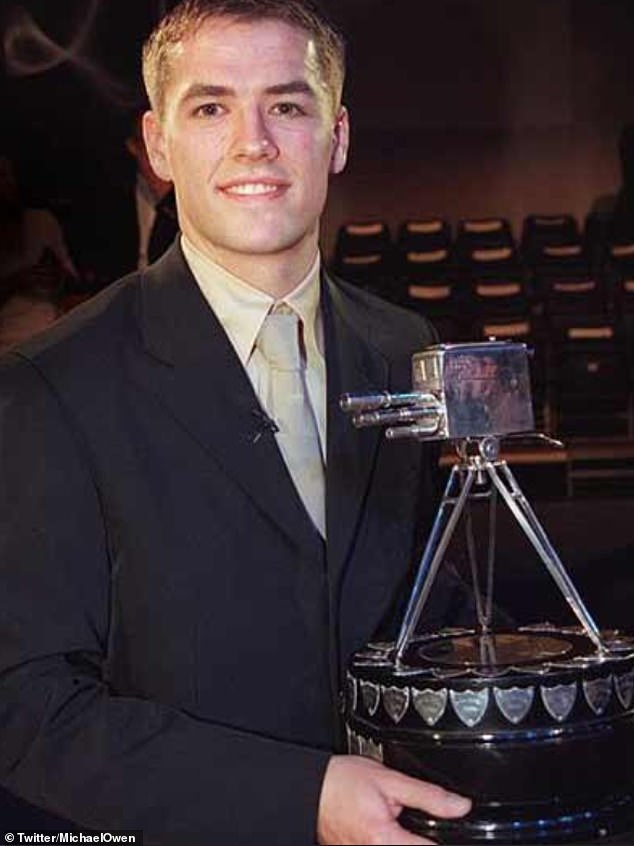 Twitter users have been mocking Michael Owen after the footballer shared a snap of himself winning BBC’s Sport’s Personality of the Year in 1998 to congratulate Emma Raducanu, 19

One man posted a photograph as he ate a sausage roll from the comfort of his home, saying: ‘Well done Emma here’s a picture of me eating a sausage roll a few weeks back.’

Another person posted: ‘Congratulations Emma, here’s a pic of me dressed as a traffic cone.’

A third wrote: ‘Well done Emma. Here’s a pic of me at your age, off my chops at a happy hardcore rave in Milton Keynes.

‘I didn’t win anything, but probably felt similar joy to you, albeit it quickly wore off and, whereas you’ll probably feel good for a couple of days, by Monday I wanted to die. 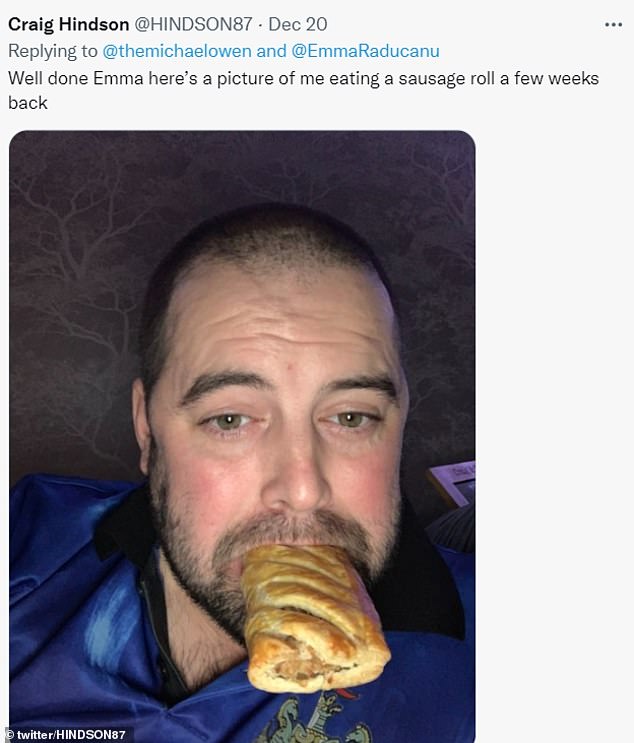 However other Twitter users were quick to mock Michael for his message of support for the tennis star, with one sharing a photo 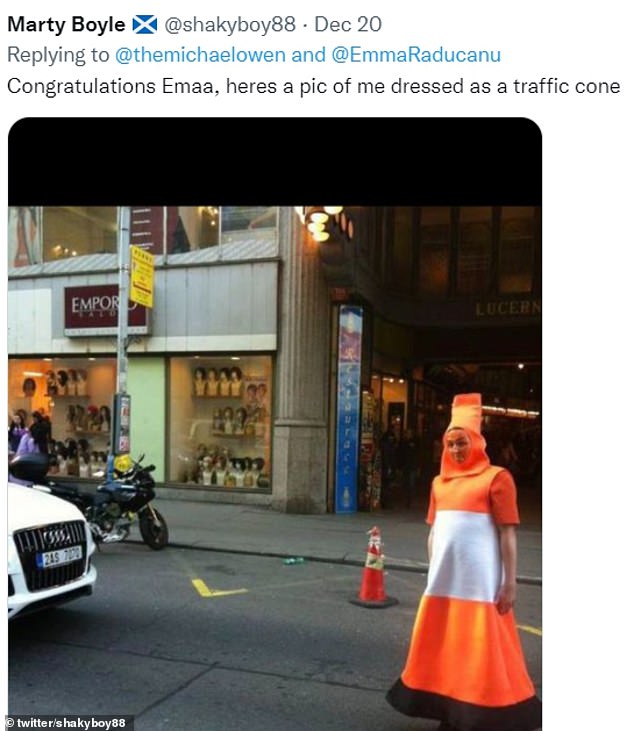 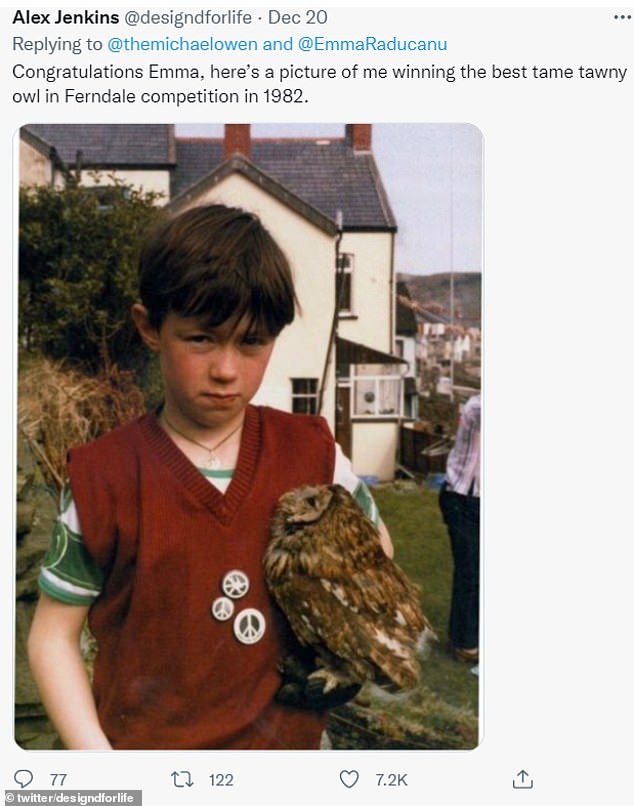 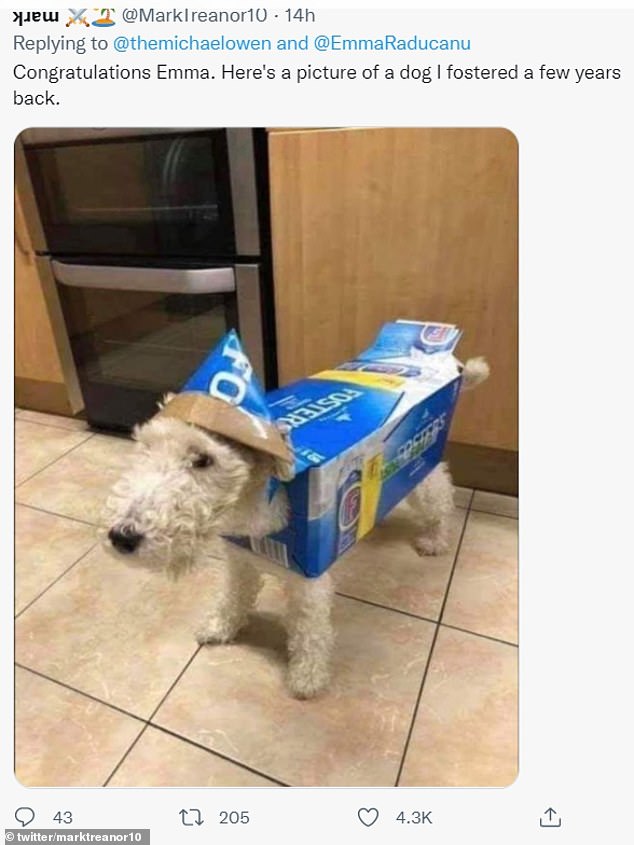 Barking back! Another person jokingly shared a snap of their dog they ‘fostered’ several years ago 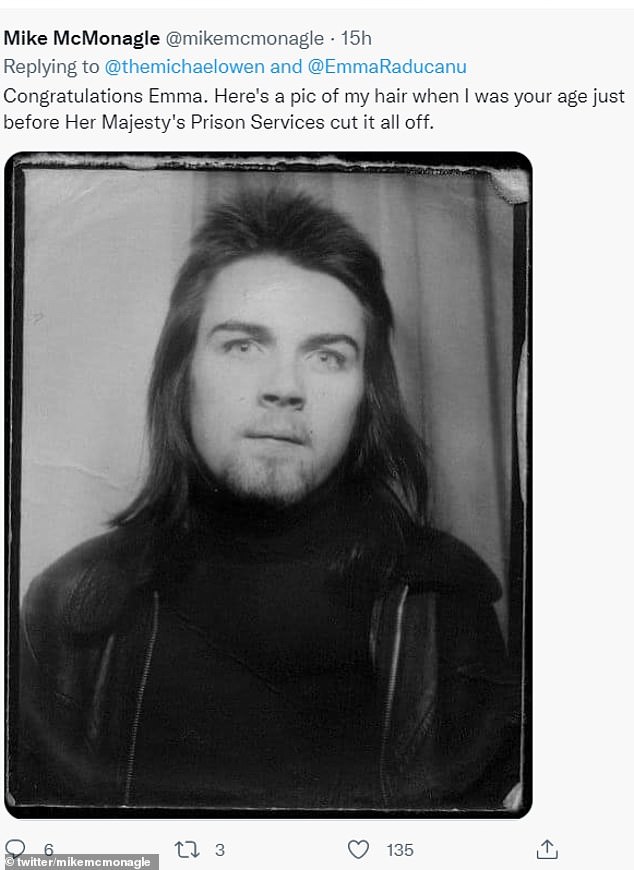 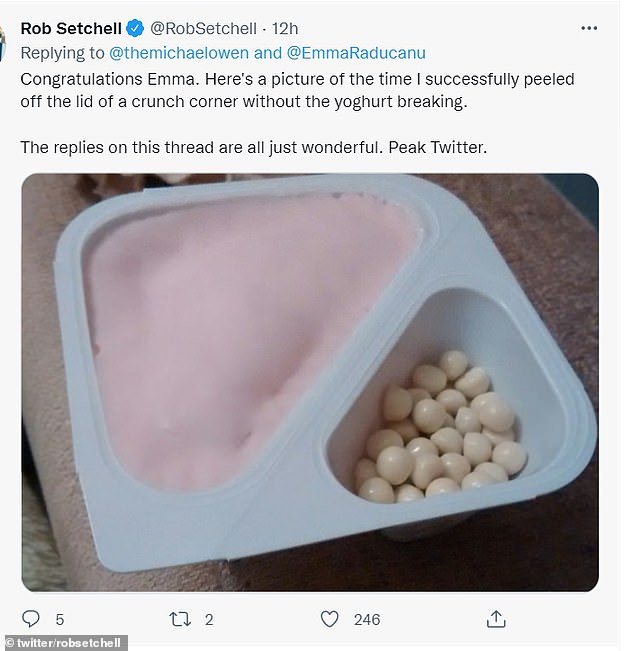 Now THAT’S a real achievement! Another person posted a snap after successfully peeling the lid from a yoghurt pot 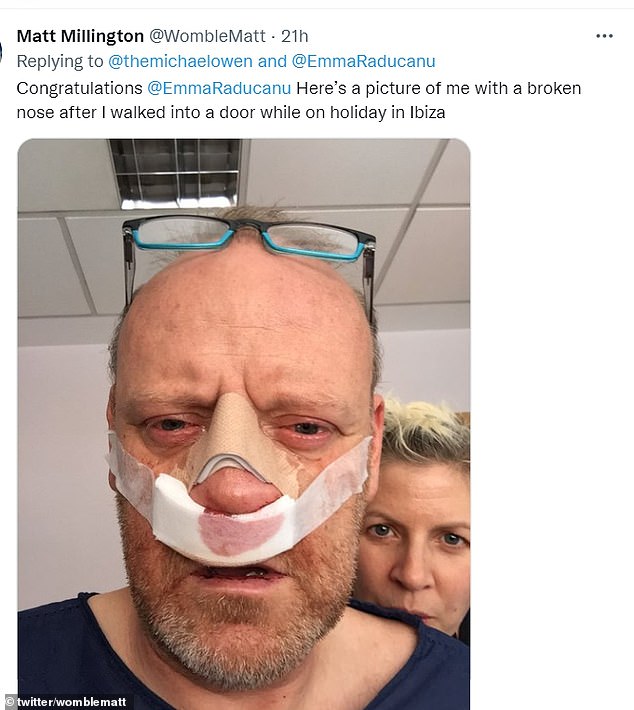 Ouch! One social media user sent his best wishes to Emma – before sharing a snap after he broke his nose in Ibiza 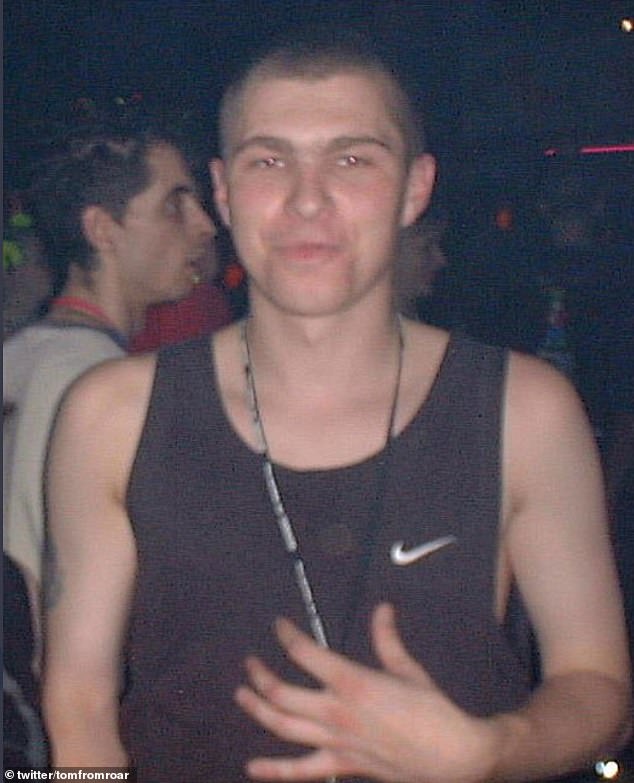 When I was your age! Another posted a snap from a ‘hardcore rave’ in Milton Keynes as he marked Emma’s win beneath Michael’s post 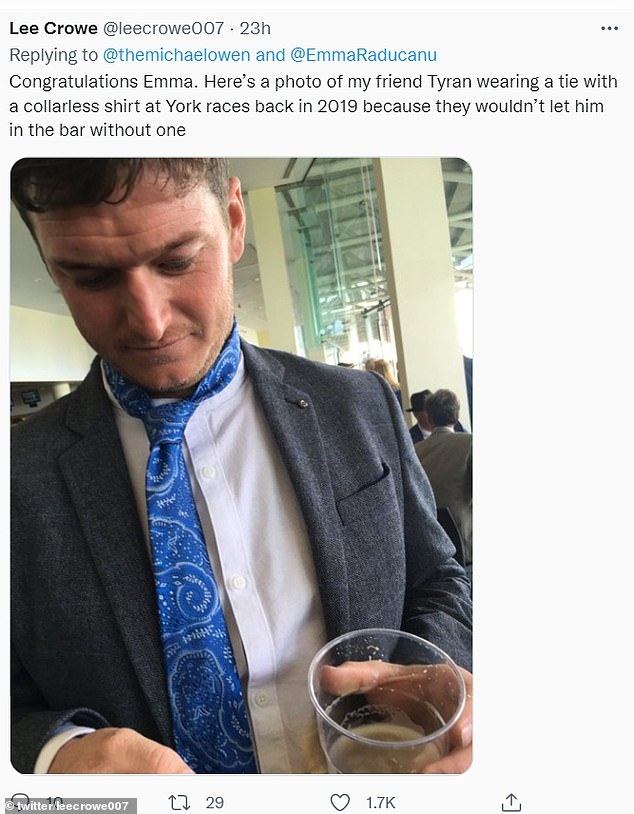 All tied up! One person posted their congratulatory message to the tennis star – before sharing  a snap of his friend wearing a collarless shirt with a tie 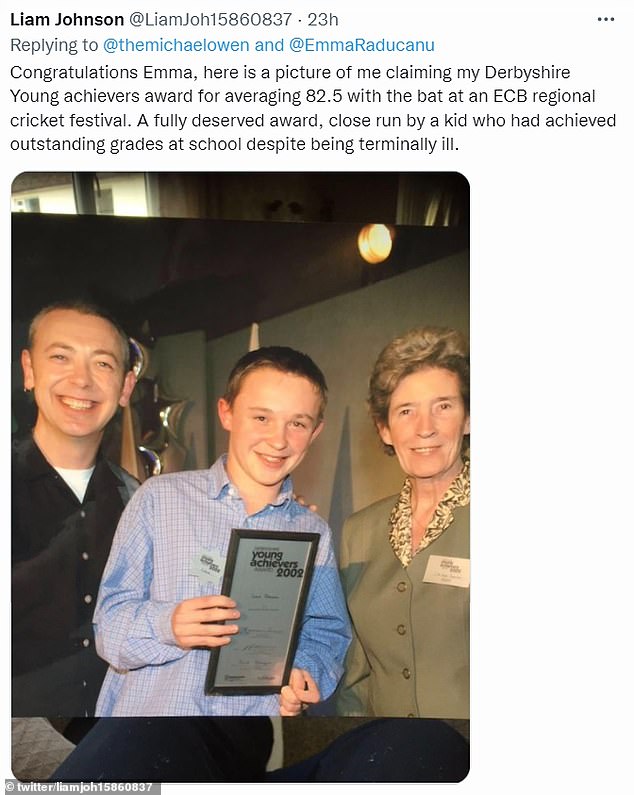 I’ve won something too! Another person shared a childhood snap as they were awarded with a Young Achievers prize 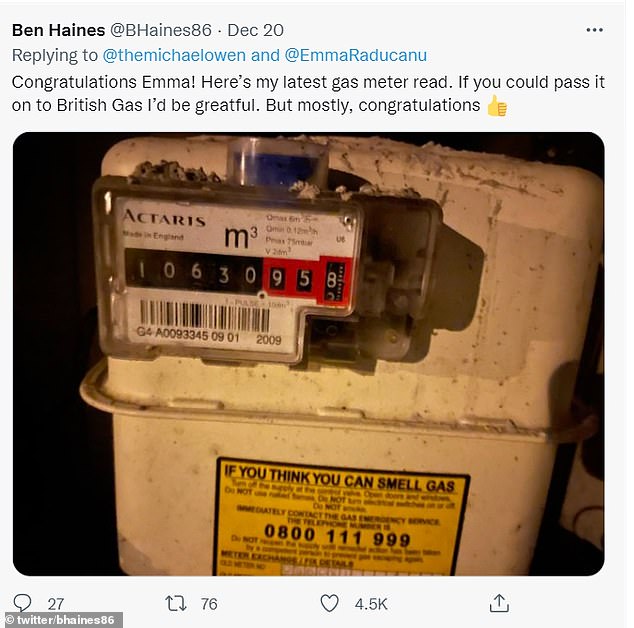 Could you do me a favour, Emma? One man jokingly posted his gas meter reading and said he’d be ‘grateful’ if she passed it on 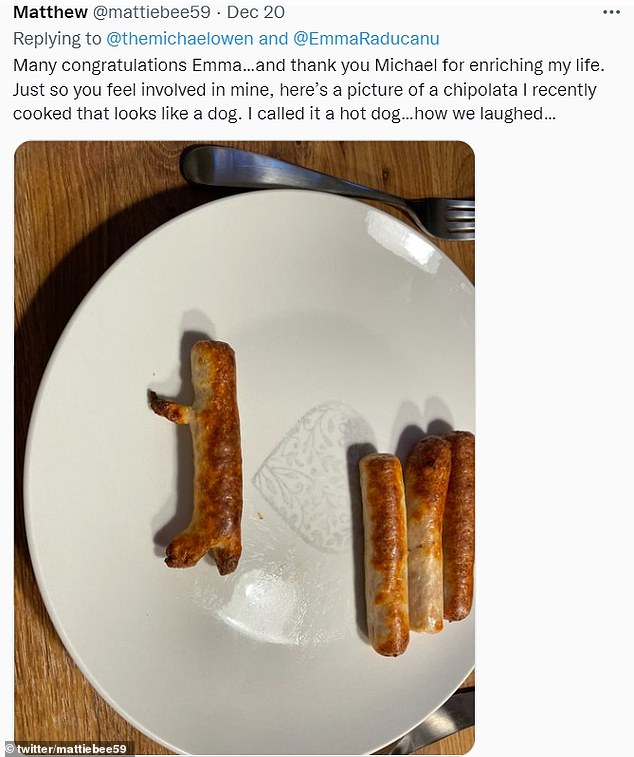 it’s the simple things! One person revealed they’d been left chuckling after discovering a sausage shaped like a dog 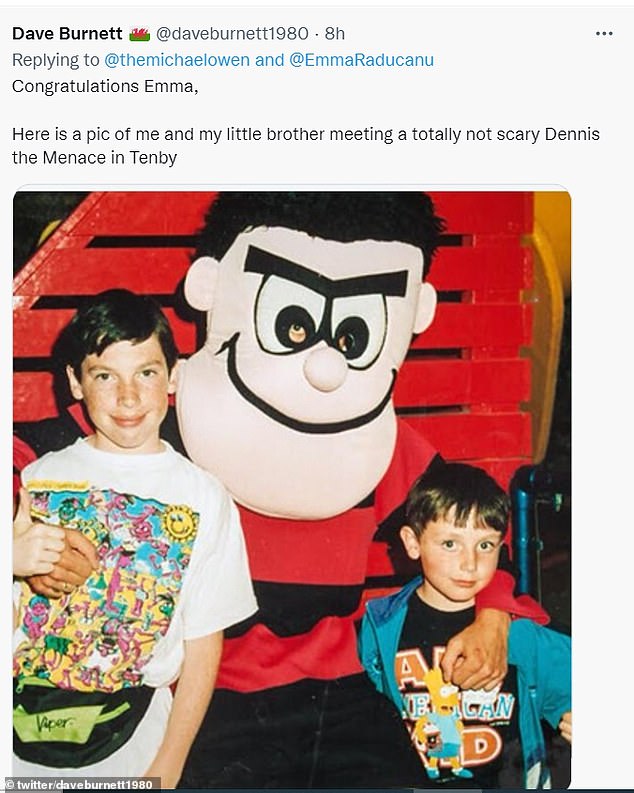 What a menace! Another person cheekily shared a childhood snap as they visited a Beano theme park alongside their congratulations to the tennis star 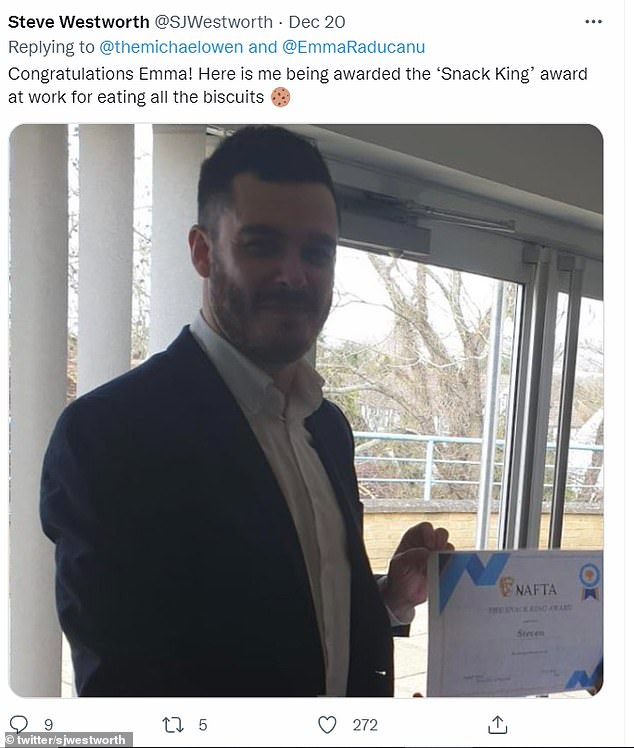 Now THAT’S an achievement! One office worker shared best wishes for Emma – alongside his own award after being voted ‘Snack King’ for eating ‘all the biscuits’ 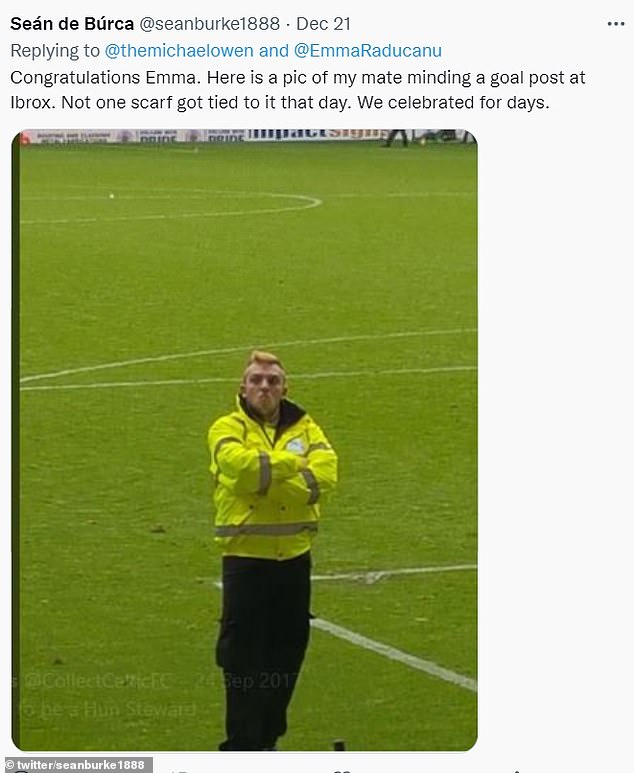 ‘We celebrated for days!’ Another social media user posted a photo of his friend at the Ibrox stadium minding a goal post

A fourth person simply posted a photograph as he posed on a bike, writing: ‘Congratulations Emma.’

‘Congratulations Emma, here’s a picture of me winning the best tame tawny owl in Ferndale competition in 1982,’ another person shared, alongside a snap  of him holding the bird.

One posted an image of his dog, writing: ‘Congratulations Emma. Here’s a picture of a dog I fostered a few years back.’

Another added: ‘Congratulations Emma! Here’s my latest gas meter read. If you could pass it on to British Gas I’d be greatful. But mostly, congratulations.’

Emma has had a rapid rise to A-list celebrity status following her US Open triumph in September, and has since been invited to be ambassador for an array of luxury brands. 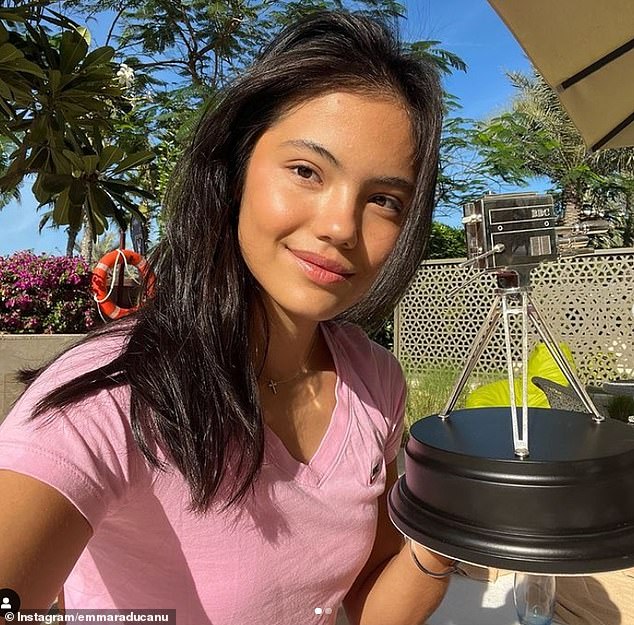 Raducanu topped the public vote ahead of Olympic heroes Tom Daley and Adam Peaty, who finished second and third respectively.

Amazingly, when Lewis Hamilton won SPOTY 12 months ago, Raducanu was ranked 345th in the world and was still a sixth-form student at Newstead Wood School.

The Bromley teenager was the overwhelming favourite for the award – as short as 1-50 on with one bookies – after her jaw-dropping victory at the US Open in September.

The British teenager produced one of the sporting stories of the year when she navigated the qualifying rounds in New York to storm all the way to the final, where she defeated Canada’s Leylah Fernandez 6-4, 6-3 to win her first Grand Slam title, as well as £1.8million in prize money. 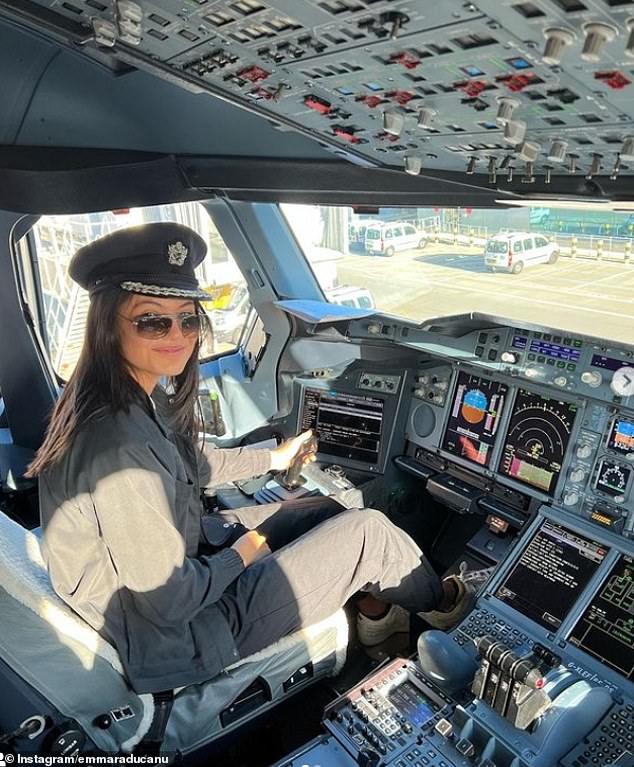 The first British woman in 44 years to win a Grand Slam singles title, she did not drop a set during the tournament.

Raducanu gained celebrity status with her maiden Grand Slam win at Flushing Meadows, with brands lining up to offer her sponsorship deals and a host of magazines featuring her on the front cover.

Days later she found herself among the A-list elite at New York’s Met Gala – the biggest night in fashion.

She rose to the occasion in a stunning midriff-baring, monochrome Chanel outfit complete with pearls encircling her waist and Tiffany diamonds in her ears.

Personally invited by Vogue chief Dame Anna Wintour, she was seated on the $500,000 Chanel table with its celebrity ambassadors – prompting speculation she would join their ranks as an ambassador. 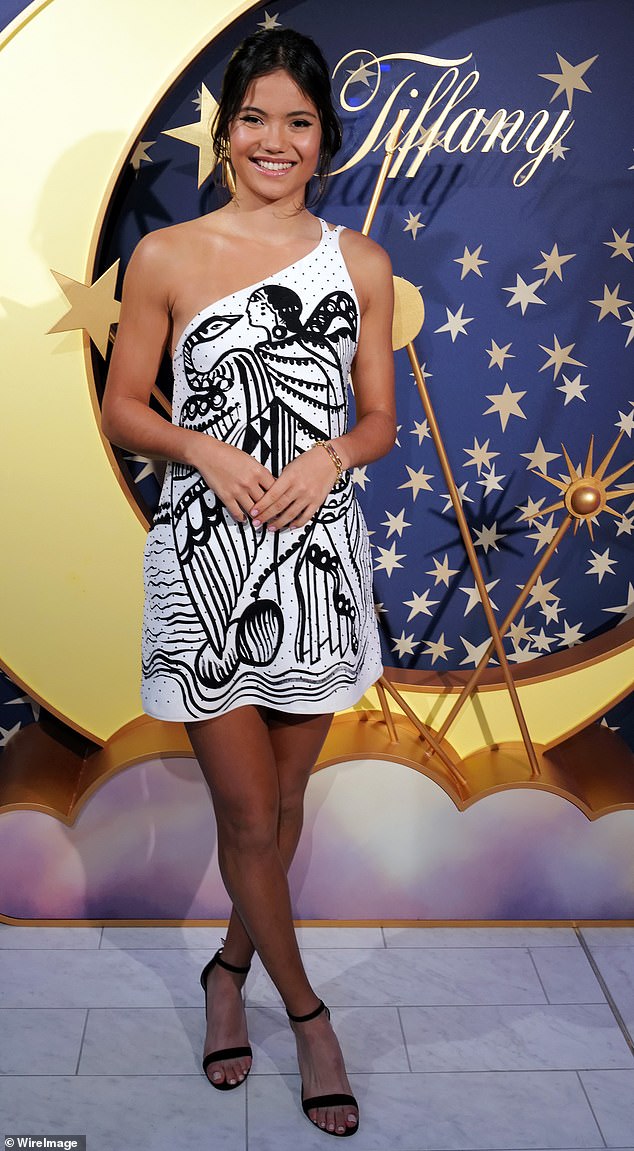 Following her fairytale of New York, Emma replaced Princess Anne as the youngest woman to win the award in the show’s 67-year history

Meanwhile, the teenager was then revealed as the face of jewellery brand Tiffany and Co in a deal estimated to be worth more than £2million.

And in October, she became the latest celebrity to be announced as an ambassador for high-end fashion house Dior.

In the role, the teen will represent Dior Creative Director Maria Grazia Chiuri’s womenswear collections as well as the luxury brand’s skincare and make-up ranges.

It is not known how much Emma will be paid for her role as an ambassador for Dior.

She has since scooped deals with Evian and appeared as the face of Sports Direct’s 2021 Christmas campaign.

Emma first became a British star after competing in Wimbledon, and went on to win her first Grand Slam at Flushing Meadows in New York

Yesterday, she announced she would be the new global ambassador for British Airways.

The tennis star has been heralded as a ‘sponsor’s dream’, and is on course to become the highest earning female sports star of all time.

It was also reported that she laid the groundwork for her potential earnings aged 17, registering Harbour 6 Limited to manage her finances.

Raducanu was always going to miss last night’s show in Salford after opting to play in an exhibition tournament in Abu Dhabi as she warms up for next month’s Australian Open.

But even a presentation of the trophy was ruled out when she caught Covid-19 last Monday and was forced to isolate for 10 days, meaning she had to pick up a replica on her own.