Check out what’s clicking on FoxBusiness.com

A United Airlines flight to São Paulo, Brazil, was forced to turn around and make an emergency landing at Newark-Liberty International Airport early Thursday morning, the airline confirmed.

"After our aircraft experienced a mechanical issue shortly after takeoff, it remained in the air to burn fuel and then landed safely," United said in a statement to FOX Business.

There were 256 passengers aboard United Airlines Flight 149 during what appears to have been a hydraulic pump issue, the airline said.

A video of the Boeing 777-200 posted online seemed to show sparks and debris falling from the plane.

A picture on Twitter shows what is believed to be a small piece of metal from the aircraft on the ground.

Flight Aware data shows the plane made repeated circles over the Atlantic Ocean before returning to the airport around 1 a.m. 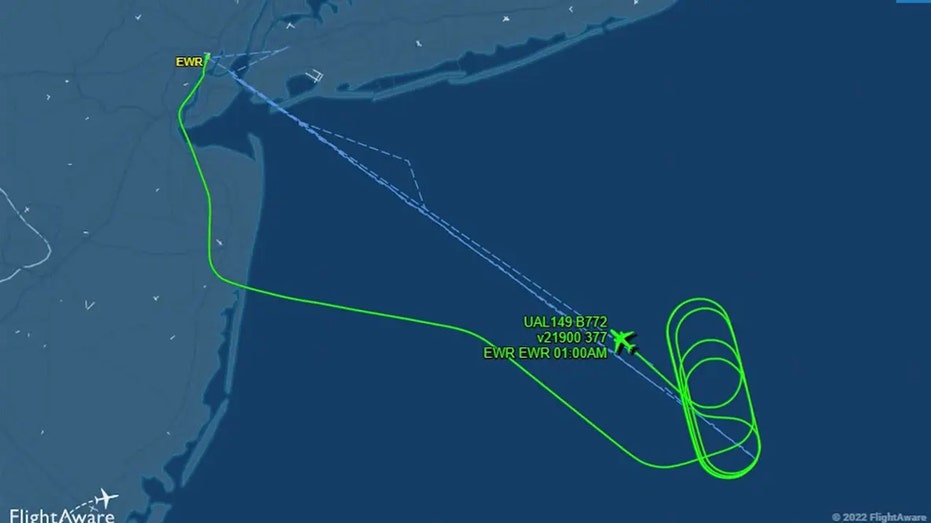 A United Airlines plane was forced to return to Newark Liberty International Airport for an emergency landing Sept. 22, 2022. (Flight Aware)

The flight was scheduled to depart Newark Liberty International Airport at 10:55 p.m. Wednesday, a statement from an airport spokesperson said.

There were no reported injuries or impacts to flight operations.

Recent travel hassles and airline cancellations may have been heightened this week as United Airlines canceled about 18 flights.

Some United planes were pulled from service when the carrier realized that some of its Boeing 777-200 aircraft had not undergone required inspections of the front edges of the wings.