The two had been going at it since filming Celebrity Apprentice in 2014.

While Kenya Moore may be in the doghouse with a few of her “Real Housewives of Atlanta” costars, she can finally cross one feud off her list.

Appearing on “Watch What Happens Live” on Sunday night, Vivica A. Fox formally accepted an apology from Kenya, who had recently attempted to say she was sorry for her part in their long-simmering battle via mutual friend Claudia Jordan.

The feud came up after Andy Cohen noted Kenya had recently appeared on the show as well and said that whole Fox had received the apology, she wasn’t “ready yet” to accept it. “I respect that, people have to be ready to receive an apology,” she said at the time. “I’m hoping she’ll accept. I really do like Vivica, before any of the drama. I think she’s a great person.”

After complimenting Moore’s chest in the video message, Fox went on to accept the apology.

“Kenya is a beautiful woman and I am ready to let bygones be bygones. She went through Claudia, issued an apology at that time and I was grateful at that time,” she explained. “At the time, I wasn’t ready. Now, I love seeing Kenya with her daughter, her daughter is so cute. It looks like she has new beef though with other people so Vivica’s good.” 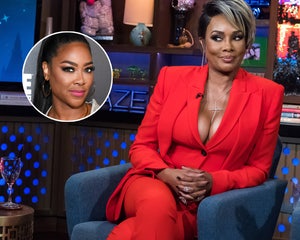 Fox and Moore have had an off-again-on-again feud for years dating back to their time together on NBC’s “Celebrity Apprentice,” which filmed in 2014 and aired the following year.  On the show, Fox called Moore a “toxic trick” and “dirty bitch,” in response to Kenya saying  Vivica’s “menopause” was causing “wild ups and downs.” Fox also accused Moore of stealing her phone and tweeting from it, claims Kenya has always denied.

Just last month, Wendy Williams asked Fox what it would take for her to apologize to Moore.

“I don’t owe her apology, she stole my phone. I have no reason to apologize to her,” said Fox at the time, before extending an invite to Kenya to appear on her talk show, “Cocktails with Queens.”