As jury selection kicked off for the second week in ex-Minneapolis cop Derek Chauvin’s trial, a judge on Monday granted the defense’s motion to have the seven jurors sat last week recalled for questioning at a later date due to “prejudicial pre-trial publicity” concerns regarding news that city council approved a $27 million settlement in the civil lawsuit filed by George Floyd’s family.

Chauvin’s attorney, Eric Nelson, said Monday he is “gravely concerned” with the news that broke Friday that Minneapolis City Council unanimously agreed to pay the record $27 million – explaining that because the court granted jurors permission to scroll through Facebook the headlines are unavoidable.

“By my count, this is the third highly prejudicial and incredibly prejudicial press leak or press release that has very suspicious timing, to say the least, and has an incredible propensity to taint a jury pool,” Nelson said, before asking the court to consider several motions.

Hennepin County Judge Peter Cahill granted one of the defense’s motions permitting the seven jurors sat last week to be called back in at a later date for questioning to determine if news about settlement changes their minds on whether they can look at the facts of the case in a fair and impartial manner.

By midday Monday, an eighth and ninth juror had also been seated.

“I’m going to grant the motion that at some point – probably after we are finished selecting – that we call back the seven to see if they’ve read anything of if it changes their minds about whether they can be fair and impartial,” Cahill said. “I think the defense is entitled to that. And I wish the city officials would stop talking about this case so much.”

Cahill denied a second motion that the defense be given more strikes in the case, pointing out that the court has already granted the defense and prosecutors triple the amount that’s normally allowed. Nelson asked the court to consider the immediate sequestration of jurors, made a request of continuance of the trial date and renewed his change of venue motion. Cahill said jury selection would proceed for now but he was taking the motion for continuance of the trial “under advisement.”

“They had a press conference on Friday where the mayor of Minneapolis is on stage with city council and they’re using very, what I would say, very well designed terminology — the ‘unanimous decision of the city council’ for example,” Nelson said, explaining how city officials publicly announced the civil settlement last week. “It just goes straight to the heart of the dangers of pretrial publicity in this case.”

Cahill said that while the timing of the announcement was “unfortunate,” he did not suspect any “evil intent” behind the city council’s press conference, arguing “it’s related to just their calculation about exposure liability.” But Nelson pointed out that in Mohamed Noor’s murder conviction, a civil settlement was announced within 24 hours of the verdict – not during jury selection. 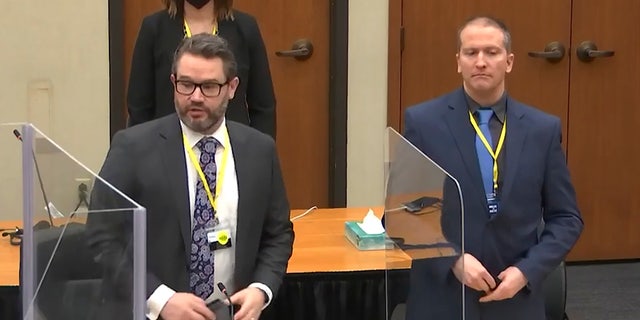 Noor’s case was cited as precedent by the Court of Appeals until Cahill was forced to reinstate the third-degree murder charge against Chauvin last week. Nelson also said Monday that Minnesota Attorney General Keith Ellison’s son is a Minneapolis City Council member.

“I’m not accusing Mr. Ellison of anything. I just want to make that very clear,” Nelson told the court Monday. “But it is you know, it is profoundly disturbing to the defense because ultimately the goal of this system is to provide a fair trial and this is not fair.”

“I know counsel is stating that he’s not accusing the attorney general of anything and for good reason because there’s nothing to accuse him of. His son is on the city council,” Special Attorney for the State Steven Schleicher responded. “They’re not coordinating anything in this regard. The mayor is a lawyer. The mayor has a job to do – he certainly doesn’t take direction from me.”

Seven jurors were sat last week, and jury selection continues Monday. Attorneys will continue questioning jurors one by one until they get to a total of 14: 12 will deliberate, two will be alternates. Opening statements will begin no sooner that March 29.

In the middle of jury selection, the city of Minneapolis last week agreed to pay $27 million to settle a civil rights lawsuit from Floyd’s family over his death. Floyd family attorney Ben Crump called it the largest pretrial settlement ever for a civil rights claim.

The settlement includes $500,000 for the south Minneapolis neighborhood that includes the 38th and Chicago intersection – an area renamed George Floyd Square in his honor that has devolved into an autonomous zone that’s brought increased violent crime and gang activity to the neighborhood. The city didn’t immediately say how that money would be spent.