Why this year’s hottest summer festivals are all about your DOG! HANNAH BETTS heads to the inaugural ‘Glorious Goodwoof’ to find out

Pimlicooooo!’ In the middle of an enormous dog festival, my whippet has bolted, hurtling towards a ‘Barkour’ demonstration: the crazed athleticism of parkour plus pups.

The little monkey has behaved beautifully all day. However, the moment the Mission Impossible theme starts blasting, stunt men and a collie somersaulting through the letter Os in a vast installation of the word ‘Goodwoof’, Pimlico is away, barking like a loon, zooming off to become star of the show.

Once I’ve got over the shock, besotted as I am, I’m secretly rather proud of Pim’s star turn.

At 51, I used to think I knew everything about love, when, in fact, I merely knew about sex. Human passion is a shabby, contingent thing compared with the epic ardour that is canine devotion. I do, of course, love my partner, Terence. But I kiss him a lot less often, and he me. It’s Pim who presides. 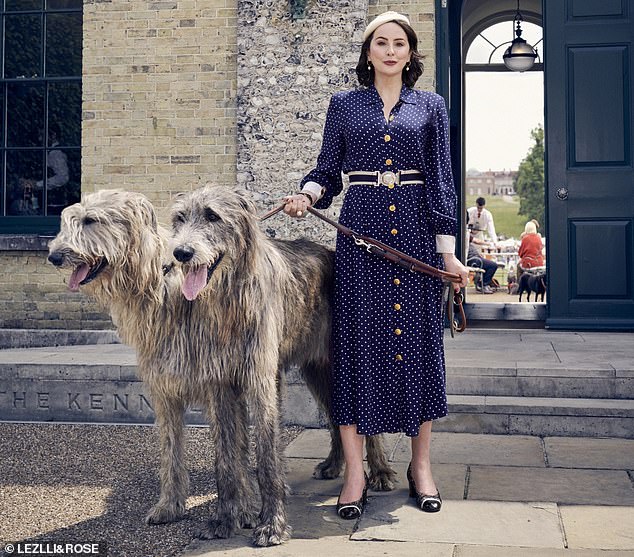 We are not alone. It is estimated that the UK’s canine population increased by at least ten per cent during lockdown to more than 11 million. More than 2.2million dogs are said to have been purchased between March and September 2020. The ‘hound pound’ is now worth an estimated £10billion a year in the UK, and rising. On average, dog owners spend almost £100 a month just on gifts for their pooches.

And all this on top of Britain’s long standing love affair with its four-legged friends. For there is something about a hound that makes the stiff upper lip tremble. If Britons are notorious for suppressing emotion, then dogs are equally notorious for unleashing it.

So it was only a matter of time before this national passion sprung forth into dog festivals.

DogFest was first held back in 2014, and now takes place in Warwickshire, Surrey, Hertfordshire, Cheshire, Leicestershire and Yorkshire. While, to confirm that we’ve reached peak dog, Sussex’s Goodwood estate, famed for horse racing, motorsports, and its vintage car and fashion festival, Revival, recently turned its headlights to hounds.

This was the inaugural year of Goodwoof, billed as a ‘mind, body and bowl’ extravaganza. More than 12,000 people attended the launch weekend, plus great packs of mutts. Given that the estate’s Festival of Speed attracts 200,000 revellers, it may soon be bigger than Crufts.

For £35 a (human) head, dogs attending free, guests were treated to every manner of dog things. There was a Canine Literary Corner, packed with writers and performers, and a Wellness Centre manned by vets, trainers, nutritionists, dog dentists and behaviourists. (The question on everyone’s lips: how do you keep pandemic pets happy after the return to work?). 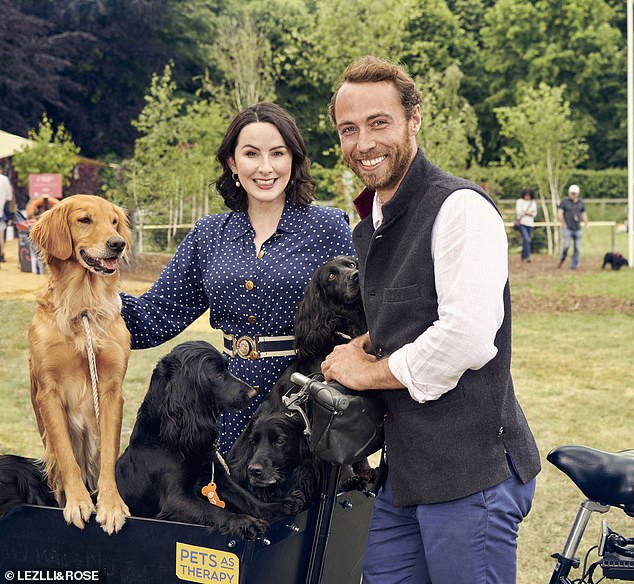 The Barkitecture pavilion featured a kennel-design competition, judged by Grand Designs’ Kevin McCloud, and won by ‘Bonehenge’, the perfect dog den made out of giant timber bones. These cutting-edge, one-off creations went on to raise more than £30,000 for the Dogs Trust when they were auctioned off by Bonhams.

Dog-loving celebrities included Mission Impossible star Hayley Atwell, Hugh Bonneville, Anna Chancellor, Bill Bailey, Anne Robinson and Pattie Boyd, who were treated to a Tattinger champagne bar and Goodwood’s very own gin and ale. While, all about, there was food and drink, fashion and furnishings, for two- and four-legged attendees alike.

We arrived at Goodwood’s Kennels bright and early on Saturday morning. Any pre-party nerves were allayed by burying our noses into the coats of Irish wolfhounds Nemo and Boris, gentle giants whose car enthusiast owners had driven them over from Germany for the event (these boys being too gigantic to fly).

Events kicked off at 10am with a parade of 240 spaniels led by Charles Gordon-Lennox, Goodwood’s extremely dashing Duke of Richmond, and his charges Ruby and Leto; Goodwoof ambassador James Middleton with his canine posse; and presenters Julia Bradbury and Radzi Chinyanganya. Even for fans of rival breeds, the spectacle was magnificent. 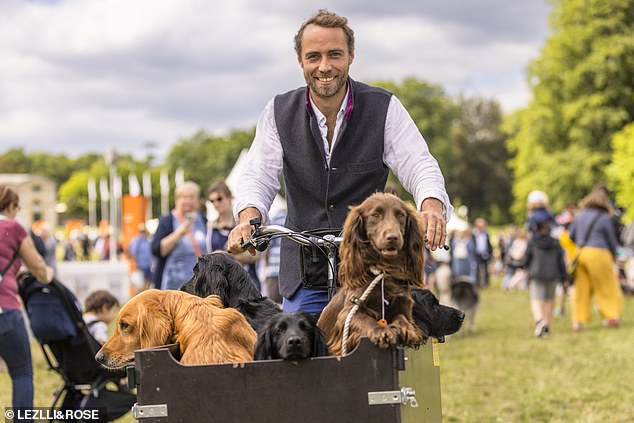 James says: ‘Dogs have always played a huge role here. Several dukes were known for spending more money on their dogs than they did on their guests’

I sat down with the Duke over a cup of tea and a bowl of water. ‘We’re not here to recognise breeding, or the shape of a tail,’ he explained, while Pim sniffed Leto’s rear. ‘We’re here to celebrate the relationship between dogs and their owners; to recognise the place dogs have in our creative culture; and to enjoy all the things we do together, from sheepdog trials to yoga.’

Who came up with the name Goodwoof? ‘There’s slight competition here, so I shall say that both myself and the Duchess came up with it at the same time?’ he grinned. ‘Dogs have always played a huge role here. Several dukes were known for spending more money on their dogs than they did on their guests.

‘Built in 1787 by the third Duke, The Kennels had central heating 100 years before the House did.’ Today, it’s a private clubhouse where dogs can have their own membership.

As to how long our current mutt mania will last, he told me: ‘It’s obvious to everyone that people were greatly helped during the pandemic by the presence of a canine friend.

‘Having a dog around the house brings a profound sense of calm, unquestioning friendship and, above all, joy. Our canine love affair — along with Goodwood’s celebration of it — is here to stay.’

Having been to Revival, I knew the Duke could throw a party, but, even so, the scale of this hound heaven was overwhelming. Diving in, we attended a (fascinating) talk on bark analysis, sought advice on Pim’s chew-treat fixation (answer: distract her with activity), and browsed for chic new leads with as much excitement as I rifle through the rails at Liberty.

Kate’s brother James Middleton pedalled past in his famous Babboe bike, and I was so excited by its contents that I found myself sprinting after him. James, a Goodwoof ambassador, was wheeling about the festival with a basket of six glossy dogs — cocker spaniel Ella, now 14, his first great love, and her offspring Zulu, Inca, and Luna, Ella’s little brown granddaughter Nala, plus golden retriever Mabel. (The Duchess of Cambridge’s beloved Lupo was also Ella’s pup, their new addition, Orla, her granddaughter). 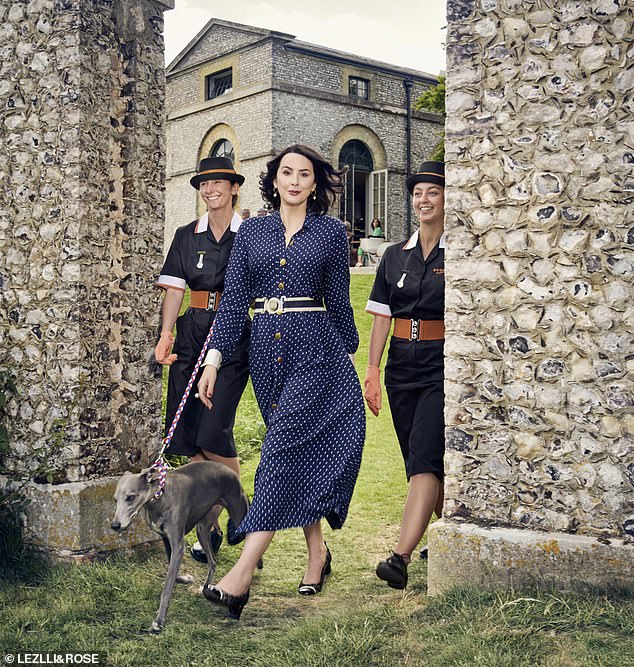 ‘Dogs really are the most selfless creatures,’ beamed James who, with Ella and Mabel, volunteers for the Pets As Therapy charity. ‘When I was taking control of my mental health, I struggled to talk to people because people react, a dog doesn’t. They’re the missing link. Ella came to all my therapy sessions. I couldn’t talk to humans, but I would direct my words to her. Ella saved my life. She’s now at the forefront of everything I do.

‘I wouldn’t be able to say all this now if the dogs weren’t here. But here I am talking to you and to hundreds of people here. The pandemic hit us hard. Whether it’s mental health in the classroom, hospitals, or in care homes, we can all benefit.’

As a depressive myself, I was deeply moved. James invited me to hold Nala ‘like a baby’ and I felt a heady rush of love. Already, she and her relatives had been stroked so often that they were developing an acute case of collective dandruff. Yet their joy at meeting people was palpable.

To distract from any jealousy, Terence entered Pim for the Fastest Dog competition on the main field’s 50m track. I was terrified this would traumatise her, given the tannoy, crowds and cheering, but he insisted. We crouched at one end, while someone held her from the other. Alas, her separation anxiety was such that she broke away before the lure had been released, or the clock set.

THE RISE OF THE BRITISH DOG FESTIVAL: OUR PICK OF THE BEST

The Paws in the Park Kent Show

Watch agility jumping, sheepdog duck herding, even dog dancing, then give your own pet the chance to have a go at the agility courses with the help of expert trainers.

There’s also the chance to meet and greet professional pooches, such as police dogs, and their trainers.

Celeb guests will be in attendance at some locations including dog behaviour expert Dogtor Adem Femhi and Countryfile presenters Matt Baker and Michaela Strachan.

Camp overnight at this two-day extravaganza that includes a dog show with 50 classes, including most handsome hound and waggiest tail. Britain’s Got Talent 2016 finalists Lucy Heath and her dog Trip Hazard will be in attendance. Have-a-go activities include dog hurdles and dock diving (yes, dogs really do dive off platforms into a pool).

All the judge could conclude was that she is ‘bloody quick’. ‘Well, she’s not doing it again,’ I shrieked. Nevertheless, I was the proudest of stage mothers.

We scored her a post-race massage with holistic veterinary nurse Lilo Ask-Henriksen, who worked down Pim’s spine releasing any tensions, clearing energies and ensuring good circulation. Pim flopped to her touch, someone walking by commending her ‘beautiful behaviour’.

As the day closed, I endeavoured to persuade Pimlico to take a post-massage dip in Fido’s Lido, complete with lifeguards. I waded into its, by now, suspiciously murky waters to entice her in. She pulled away, appalled. ‘Quite right. It’s a pool of pee,’ noted Terence, as staff prepared to drain it for the night.

Other than this, I am delighted to report that I didn’t spot any leg cocking or a single stray turd. There was the occasional minor spat, but no fights or humping. Goodwoof was a veritable canine charm school.

As our furry friends headed home, we strolled through the grounds to the Goodwood Hotel. It’s the perfect spot for humans with a hound: not too glam, yet with heavenly sheets and baskets, dog-walking maps, and all mod/dog cons — from espresso machines to chicken chews. Plus your dog can accompany you on your hot date at the estate’s restaurants. We went to sleep, one happy trio, Pim in the middle.

Our Sunday at this canine-crazed country show was more relaxed, and we basked in the sunshine playing host to other hounds. If Pim is going to have puppies, then November will be the moment, and we’ll need to find her a partner-in-crime. Goodwoof was ideal for doggy dating, not least as your eyes are always drawn to your own beloved breed.

On Saturday, the judge of Goodwoof’s first annual Chien Charmant competition (prizes care of Hermes) was Hollywood’s Hayley Atwell. On Sunday, its nine entrants had to make do with me. I fell in love with winner Lloyd, a whippet, whose trick is to spring up and kiss owner Paz.

Pim was too neurotic to be separated from us and taken for a walk by Goodwoof’s Gnawland Nannies (a take on Norland Nannies) while we had tea. Instead, she sat enthroned while waiters brought her treats, as if she owned this pawed paradise.

We caught the train home blissfully content. Terence and I were dizzy with dogs, swimming in serotonin, faces aching from smiling. Pimlico was an elegant grey heap, coat silky with strokes.

As Vita Petersen, aged 12, from South London, whose mother, artist Holly Frean, created canine portraits for Goodwoof, enthused as we said our farewells: ‘It’s been amazing and my greyhound, Bella, has loved being a VID (Very Important Dog) — but the best part has simply been getting to hug loads of hounds.’ I couldn’t have put it better myself.