Kings Cross: Now this is how you watch the Olympics: bottom on lounge, feet in ugg boots, thumb feverishly working the television remote as you flit between channels, self-administering your own euphoric dose of swimming, surfing, shooting, sailing, softball, soccer and skateboarding.

And that’s just the sports that start with “s”!

Much like an athlete, save for a few crunches and star jumps, the pinnacle of a sports reporter’s career is covering the Olympic Games. Supposedly. Let me tell you something for free: it’s a pain in the arse. The best way to drink it all in is at home, not sweating bullets as you zigzag around the busy host city, crammed into mixed zones and media buses, often feeling one step behind the action.

The lounge is certainly the best way to watch swimming, which is a dreadful spectator sport without the commentary, world record line and, more recently, average speed of each swimmer water-marked behind them at every turn.

The Dolphins have opened this Olympic campaign in much the same way they started in London and Rio de Janeiro with a mixed bag of gold, silver, bronze and duck egg.

Elijah Winnington headed into the final of the men’s 400m freestyle on Sunday as favourite and flamed out for seventh, upstaged by less fancied teammate Jack McLoughlin, who clinched silver. 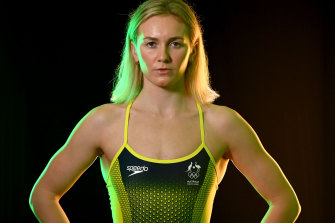 Ariarne Titmus … The not yet recognisable but new face of Australian swimming.Credit:Getty

A little later, the 4x100m freestyle women’s relay team claimed its fourth gold in the last five Olympics, smashing the rest of the world by a whopping three seconds in world record time.

In a reassuring sign, Emma McKeon swam almost a second faster than Cate Campbell. On Thursday, they’re expected to eyeball each other in the 100m freestyle final but let’s do something different and not count our gold until it becomes official and its plastered all over Instagram.

At the past two Olympics, gold medals have been pencilled in based on world rankings and times at the trials, only for already fragile hearts to be shattered when it doesn’t happen. The swim team returned from Rio with just three gold after claiming just one in London.

Throw in a Stilnox scandal and, more recently, claims of bullying, fat-shaming and sexual misconduct, and it’s become difficult to get excited about everyone’s favourite sport every four years or, in the case of these COVID-troubled Olympics, five. 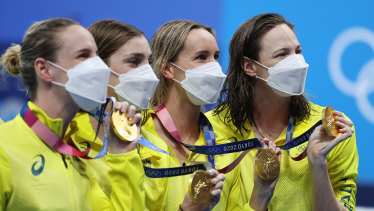 The victorious women’s 4x100m freestyle team with their gold medals on Sunday.Credit:Getty

Thankfully, there’s a fresh wave of swimmers coming through. At the front of the queue is Ariarne Titmus, who is humble and cool and seemingly gets right up the nose of American legend Katie Ledecky, whose using the old trick of barely mentioning Titmus’ name publicly since Titmus beat her at the 2019 world championships.

After the heats went to script on Sunday night, Titmus will meet Ledecky for the first of several showdowns this week in the 400m freestyle on Monday.

But riddle me this, sports fans: if the hottest thing in Australian swimming was sitting at the table next to you in a cafe, would you notice?

The Harvey Norman ads currently on high rotation point to how far the once-treasured sport of swimming has slipped from the national psyche.

After posing with an array of white goods, Titmus looks down the barrel of the camera and says, “I’m Ariarne Titmus …”

In the coming days, we’re looking forward to getting to know Titmus and her teammates much better. We might even get our sizeable bottoms off the lounge and cheer.

IOC get their skate on

Like middle-aged men who wear flat brim snapback hats (you know who you are), the IOC is doing its best to remain youthful by introducing sports that are down with the kids.

Skateboarding made its debut before banks of empty seats that should’ve been heaving with a new generation of spectators.

Australia’s best hope was Shane O’Neill in the men’s street competition on Sunday. He’s got a pair of Nikes named in his honour: The Shane. 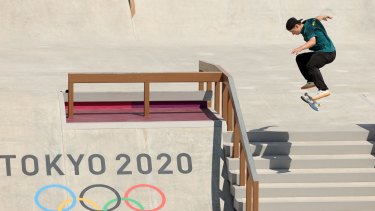 Shane O’Neill in action in the street skating on Sunday.Credit:Getty

“It’s like he’s got helium in his bones,” one commentator mused seconds before O’Neill and The Shanes had a massive stack attempting to jump down eight steps,

Winning didn’t seem as important to the competitors as their sport being showcased to a broader, non-flat-cap-wearing audience.

“We’re all homies out there,” American Nyjah Huston said. “Even if it’s not someone that you’re super close to, you still see him doing a trick that’s insane and you go, ‘Damn, that was sick’. Competing at the Olympics is amazing but my best time in my life is just going out skateboarding with homies and going to shred in the streets.”

THUMBS UP
From its Perspex cubes in the dining halls to sex-proof cardboard beds, the Olympic Village is getting a bad rap. Consider this from our man on the inside: “The atmosphere in the village is weirdly so much better than in Rio — maybe because we have a plumbing system.” 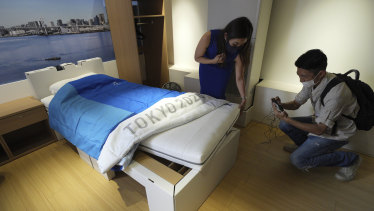 Forget the cardboard beds – the Tokyo athletes village has a working plumbing system.Credit:AP

THUMBS DOWN
Are you aware The Voice will be on Seven? On Sunday? After the Olympics? Not sure if I’ve got the stamina for two weeks of cross-promos for Seven’s singing contest. That said, I think the coverage has been good thus far. Thoughts?

It’s a big day three of the Games of the XXXII Olympiad for … former Wallabies wrecking ball centre Samu Kerevi, who makes his Olympic debut for the Australian sevens team, which meets Argentina in its opening match at Tokyo Stadium.

It’s an even bigger day three of the Games of the XXXII Olympiad for … the surfers with a typhoon set to increase wave size to something not seen since the final scenes of Point Break. Should make the second session in both men’s and women’s compulsory viewing.