INDIANAPOLIS — A journey to Hinkle Fieldhouse, with its rich history (and place in celluloid fiction) seems to have inspired some coaches in the N.C.A.A. men’s basketball tournament to reach for their A-list motivational material.

Walking into the old, red-brick hangar, where 24 teams have played through the first weekend of this tournament amid the pandemic, the echoes of “Hoosiers” — “Let’s win this for all the small schools that never had a chance to be here” — are a little too rich to resist.

At least they were for Oregon State Coach Wayne Tinkle — except that in the excitement of this so-far exceedingly unpredictable tournament, with brackets being busted left and right, he forgot to unholster his most stirring message.

“I was saving this one and I forgot to use it,” Tinkle said late Sunday night, after the 12th-seeded Beavers scored their second consecutive upset, knocking off No. 4-seeded Oklahoma State. “I said, we may be on Eastern time but the clock hasn’t hit midnight back in Corvallis. I forgot to throw that one at the guys.”

This tournament, all being played in Indiana with 68 teams over a 19-day period, has been defined thus far by the coronavirus and Cinderella, befitting partners this year in the tournament some call the Big Dance.

The disruptions wrought by the pandemic — the positive tests, ensuing pauses, canceled games and the overall uncertainty — that so influenced the regular season have not disappeared with the snap of a pair of fingers.

One game has been canceled and four teams have played short-handed because of positive tests, but more broadly the interruptions have also wiped away the continuity of a normal season, impeding the steady monthslong building toward a moment in March.

The gaps in resources and talent between the Wisconsins and the Winthrops have been winnowed by the effects of a capricious virus.

A record nine double-digit seeds reached the second round, and at least four will reach the round of 16, a number that has not been matched since 2011, and has not been exceeded since 1999 when five made it to the second weekend.

Then there are U.C.L.A. and Syracuse, both No. 11 seeds with rich histories in an uneven season that have found their footing. The Bruins beat Abilene Christian, 67-47, Monday to reach the round of 16 from the First Four.

Oregon State is a different sort of darling. The Beavers are in a major conference, but have not reached the round of 16 since 1982. They were picked to finish last in the Pac-12 and are in Indianapolis only because they won the conference tournament, which started with them rallying from a 16-point deficit to beat U.C.L.A. in overtime.

“Obviously teams respond to adversity differently,” Tinkle said on Monday. “With the missed summer, abbreviated fall and late start, a lot of teams hit their stride later than usual.” 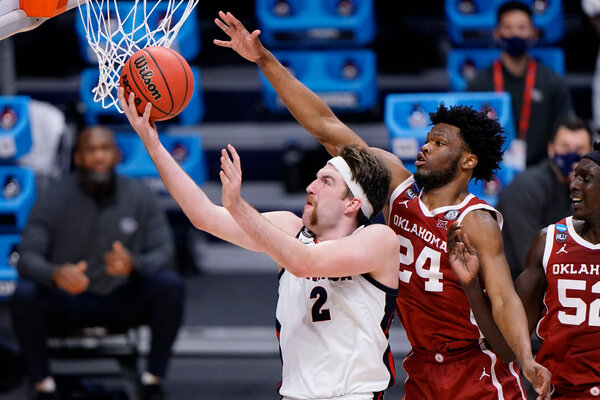 Thus far, little has seemed to disrupt top-ranked Gonzaga, which moved into the round of 16 on Monday with a 87-71 victory over pesky Oklahoma, which was playing without its second-leading scorer, De’Vion Harmon, who had contracted the virus last week. The Bulldogs, who improved to 28-0, are trying to become the first unbeaten men’s champion since Indiana in 1976.

Gonzaga Coach Mark Few said that while finding a rhythm has been difficult at times, he praised his players who he suggested could probably handle being shipwrecked on a deserted island.

Still, he acknowledged that the season “has been a long, hard slog to get to this point.”

The players, of course, are not compensated for the burden that they are being asked to undertake this season. There is a love of the game, but they have been required to take virus tests daily since they began arriving in Indianapolis nearly a week before the tournament began. Once here, they have been restricted to their hotels except to practice, play and wander to a downtown baseball field to get some fresh air. Some have used the moment to protest against the N.C.A.A. depriving them of the right to make money off their fame, and to rail against the inequities between the men’s and women’s tournaments.

The weight of all that, along with realization of a four-year journey with his teammates coming to an end, was too much to bear for Iowa’s all-American center, Luka Garza.

When he came to the bench in the final seconds of the second-seeded Hawkeyes’ loss to Oregon on Monday, he buried his head on the shoulder of Coach Fran McCaffery. The sobbing, though, continued into the locker room and he later struggled to maintain his composure while speaking to reporters on a videoconference.

“It’s heartbreaking,” Garza said. “It’s so surreal that it kind of just all hit me at once that this is the last time that I’ll put on this jersey.”

The victory by Oregon was the 15th by the lower seeded team in the tournament’s first 33 games. The Ducks were playing their first game of the tournament, having been sent through to the second round because Virginia Commonwealth was forced to drop out because of several positive tests after it arrived here.

As the tournament heads to the second weekend, the line is as blurred as ever between top dogs and underdogs, who if anything have been emboldened by the fight. Corvallis, Ore., isn’t the only place where midnight hasn’t arrived yet.

“As I told the guys, we’re not going to let somebody put a number in front of our name and tell us that’s our worth or that’s our value,” Oral Roberts Coach Paul Mills said late Sunday night. “We are not capitulating to anybody here.”