For years, tennis has been asking itself how it will move on as its biggest stars head for the exits.

If the first week of the U.S. Open is any indication, it just might be with three 18-year-olds named Carlos Alcaraz, Emma Raducanu and Leylah Fernandez who have barged in where they don’t yet belong, but clearly do.

With howls of “Vamonos!” coursing through the crowd at Arthur Ashe Stadium on Friday, Alcaraz of Spain pulled off the upset of the tournament in knocking off Stefanos Tsitsipas of Greece, winning a five-set classic, 6-3, 4-6, 7-6 (2), 0-6, 7-6(5).

When Alcaraz was done, Leylah Fernandez stepped into the spotlight.

Fernandez, the product of an Ecuadorian father and a Filipino mother who was raised in Canada, went toe-to-toe with the defending champion, Naomi Osaka, and outlasted the four-time Grand Slam winner to win 5-7, 7-6 (2), 6-4 in front of a raucous night crowd that largely expected to see Osaka put on a clinic against a teenager ranked No. 73 in the world who had never made it past the third round of a Grand Slam.

Osaka struggled to gain control of the match and solve Fernandez’s lefty power, always a dangerous combination. Fernandez looked like she might make an exit with Osaka serving for the match at 6-5 in the second set, but she had the audacity to break Osaka’s serve, then ran away with the tiebreaker and never looked back. 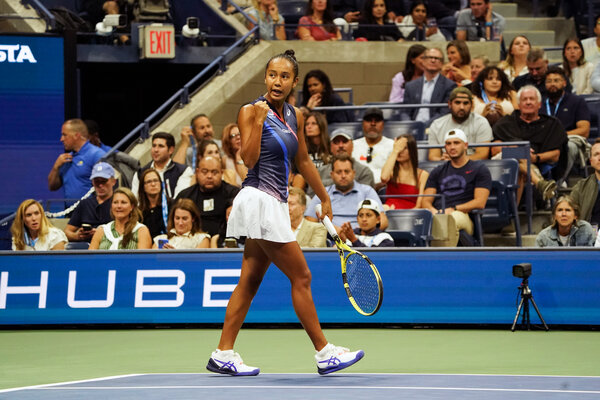 It was just a few months ago that Tsitsipas, with his flowing dirty-blond hair and philosopher-prince soliloquies about tennis as a form of self-expression, looked to be the heir apparent to the Big Three of Novak Djokovic, Rafael Nadal and Roger Federer.

But ever since he coughed up a two-set lead over Djokovic in the French Open final, he has frittered away good will with inconsistent play, pronouncements that getting the Covid-19 vaccination is unnecessary, and a never-ending series of midmatch toilet breaks that go on and on and on. His father, Apostolos, who doubles as his coach, was in his corner Friday, but there weren’t many others.

After a couple of matches on the field courts, Alcaraz strutted into Arthur Ashe Stadium like a middleweight boxer intent on landing some quick crosses on the jaw of his opponent. Did he ever.

Alcaraz, known as “the next Rafa” in tennis circles, especially in Spain, already had Tsitsipas on his heels in the third game when he ripped a crosscourt forehand by Tsitsipas, who stopped and stared at the mark and shook his head with an “are you kidding me?” laugh.

Alcaraz was just getting started. By the time he broke Tsitsipas’s serve for a third time to clinch the first set, the seats of the biggest stadium in the sport were filling up with thousands of fans who were acting like they had been on a first-name basis with Alcaraz for years.

It’s a funny thing about young and little-known tennis players like Alcaraz and Raducanu, who were both well outside the top 200 a year ago — they develop followings like indie bands. The field courts at major tournaments function sort of like small night clubs. As word spreads of a player whose strokes and stage presence can’t be missed, the bleachers and the standing room surrounding those outer courts swell beyond capacity, with fans who will speak years later of catching Alcaraz or Raducanu in a tiny venue up close, the way the early adopters of the Talking Heads still talk about those nights at CBGB in the East Village in the 1970s.

That was the vibe at Raducanu’s match on Thursday on the tennis hinterland known as Court 10 at the Billie Jean King National Tennis Center, the last court before the South Gate exit.

Raducanu, whose parents are Romanian and Chinese, was born in Canada before moving to England when she was 2. She was barely known in England before Wimbledon. There, in her Grand Slam debut, she played her way into the second week of the tournament with her fearless, clean strokes and aversion to giving up a chance to put pressure on her opponent, whether that means whipping forehand service returns or firing second serves that look like first balls.

The Wimbledon run ended dramatically in the round of 16, when, playing in front of 12,000 screaming fans on the No. 1 court for the first time, she suddenly couldn’t breathe. She retired from the match, down a set and 3-0 to Ajla Tomljanovic of Australia, leaving all of England crestfallen.

In an interview on Thursday, Raducanu said that what ailed her was physical — simple exhaustion brought on by a series of long rallies against a mature opponent — not what most assumed was a panic attack from the pressure of a more intense spotlight than anything she could have anticipated.

“I was playing at such a high level for so many days and I wasn’t used to it,” Raducanu said after her second round win over Zhang Shuai of China. “We had some 20-shot rallies and I could not control my breathing. The doctors advised me not to continue. I hated retiring.”

Since then, Raducanu has played a lot of matches and won a lot of matches, at tournaments in Northern California, Chicago, and at the U.S. Open, where she has won 10 consecutive sets, including three wins in the qualifying tournament.

She is long and lean and athletic in the most graceful way. She stays low to the ground as she moves across and into the court, chasing down every ball she has the slimmest chance of reaching. Waiting to receive the serve, she crouches like a shortstop anticipating a sharp line drive.

By Thursday afternoon, Raducanu had the overflow crowd on Court 10 chanting her name. As she served to clinch the match against Zhang, drums started to sound just beyond the fence. These were not just any drums. They were the booming sounds of the Howard University marching band, which was performing throughout the grounds all day. And they were intermittent, playing without warning, even as Raducanu was about to toss her ball in the air to serve.

Raducanu said she twisted her mind into thinking the drums were celebrating her. When it was over, a bulging pack of fans hung over the fence asking for autographs and selfies. She obliged every one, nearly forgetting to grab the racket she dropped in the corner of the court on the final point before she left.

She will move to a larger stage on Saturday for her third round match against Sara Sorribes Tormo of Spain.

“I’m ready to play on anything, even the park at the back P17,” she said, referring to the outer practice courts in Flushing Meadows.

Alcaraz was more than ready. His battle against Tsitsipas lasted more than four hours. After letting Tsitsipas even the match at a set apiece, Alcaraz was down 5-2 and two service breaks in the third set, and Tsitsipas was bullying him around the court like a man playing a boy. It was a moment when most players, much less a teenager, would go away against the world’s third-ranked player.

Alcaraz did the opposite. He blasted forehands and backhands at the lines, and put Tsitsipas on the run chasing drop shots and topspin lobs as he drew even at 5-5. Soon Tsitsipas was talking to himself after nearly every point. A drop shot and a searing passing shot clinched the set in a tiebreaker for Alcaraz, whose trademark is a little unconscious hop he takes after he hits winners.

He windmilled his fist as the crowd exploded. Only Alcaraz’s coach, the former world No. 1 Juan Carlos Ferrero, stayed in his seat. Forgive him, he has been here before. Tsitsipas headed off the court for another of his signature toilet breaks, to a rousing round of boos.

The break worked for Tsitsipas, who reeled off the next six games to take the fourth set, 6-0. It was another moment when the teenager could have faded.

Instead, he called for an on-court massage, and on to the fifth set they went, trading service games until what seemed like an inevitable deciding tiebreaker as the crowd chanted “Carlos! Carlos! Carlos!”

Once there, Alcaraz kept on blasting, leading with his chin. A forehand right at Tsitsipas’s gut that he rimmed into the net gave Alcaraz three match points. He needed every one, missing by an inch at 6-4 on a topspin lob before one last winner down the line completed the coming out party, with one last explosion from the crowd as he collapsed on the court.

“The best match of my career,” Alcaraz called it.

Almost as good as that Talking Heads show at Max’s in 1975.

This is how tennis moves on.