RANGERS fans weren't happy when a picture was shared on social media of their partnerships manager CELEBRATING in the Liverpool end after last night's Champions League rout and calling the win 'Easy'. 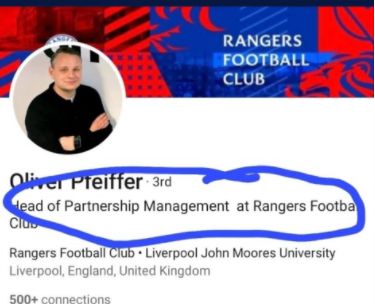 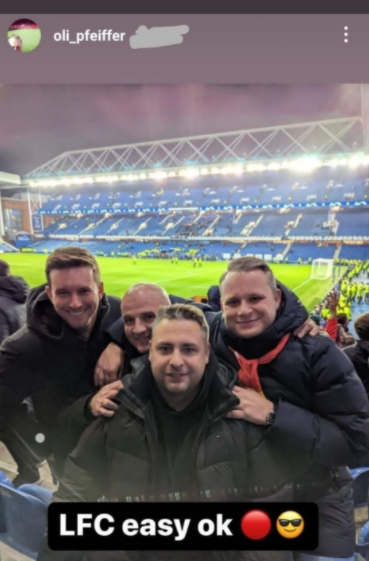 But Gers fans reacted with anger after an image shared from his private Instagram account showed him in the Liverpool end after last night's match celebrating the result.

The image of Pfeiffer with three friends in the Liverpool end contained the words: "LFC Easy ok".

That went down like a lead balloon with Gers fans who had just seen their team concede seven goals in Europe for the first time.

Another wrote: "A guy employed by a company to oversee commercial partnerships is posting on social media, gloating at said company’s worst ever home performance in Europe."

A third wrote: "Clear proof of the lack of professionalism from staff at Ibrox from top to bottom."

Meanwhile, Rangers are facing a mounting injury crisis at the back ahead of Sunday's trip to Motherwell.

They could be left with just ONE fit, recognised centre back for the clash at Fir Park.

That's because Ben Davies has emerged as a fresh injury doubt.

The ex-Liverpool defender felt muscle tightness during the heavy defeat to his old club but refused to come off, according to reports.

The Athletic suggests the £4m summer signing will be assessed today with the Ibrox injury list increasing and van Brocnkhorst defensively stretched.

Goldson will undergo a scan today after being spotted watching the second half on crutches. He pulled up with a thigh issue challenging Darwin Nunez in the first half and was replaced by 18-year-old Leon King.

The teenager could now be van Bronckhorst's ONLY option at centre-back if Davies is ruled out and fears over Goldson are proven correct.