Tokyo: American gymnast Simone Biles has withdrawn from event finals for vault and the uneven bars at the Tokyo Olympics, USA Gymnastics said on Saturday.

Biles, who continues to wrestle with mental health issues, had earlier withdrawn from the women’s all-around final on Thursday and the team final on Tuesday after a poor mark on her opening vault. 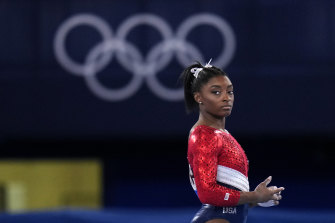 Simone Biles chose to withdraw from competition to protect her mental health.Credit:AP

The 24-year-old, however, might yet make an appearance at the Tokyo Games having not ruled herself out for floor exercise on Monday and beam on Tuesday.

“Today, after further consultation with medical staff, Simone Biles has decided to withdraw from the event finals for vault and the uneven bars,” said USAG in a statement. “She will continue to be evaluated daily to determine whether to compete in the finals for floor exercise and balance beam.”

Biles was expected to be one of the headliners of the Tokyo Games in a bid for six gold medals that would have made her the most successful woman Olympian of all-time across every sport.

But her quest ended almost before it began as star US gymnast sent shockwaves through the Olympic world on Tuesday when she pulled out of the team event after one vault.

She later decided to not defend her Olympic all-around title that was won by US teammate Sunisa Lee.

Biles has spoken with remarkable candour about her decision saying she needed to consider both her mental and physical wellbeing as she dealt with the “twisties” incidents of disorientation during some of her gravity-defying skills.

“It’s honestly petrifying trying to do a skill but not having your mind & body in sync,” Biles wrote on Instagram on Friday.