Darts legend Andy Fordham has passed away aged 59, months after admitting that he was ‘terrified’ of death after being beset by health problems in recent years.

At the peak of his career, the Viking was crowned world champion in 2004 after defeating Mervyn King at the BDO World Championship.

Fordham faced health problems during his life and once weighed 31 stone, revealing that he would drink 25 bottles of lager a day.

He contracted coronavirus in January this year and revealed to The Sun that doctors warned him that the disease could hit him ‘very quickly’.

‘This is the scariest thing I’ve ever had to face in my life,’ he said.

‘My biggest fear is waking up one morning, not being able to breathe and being placed in the back of the ambulance – then not seeing my wife and children again.’

Darts icon Andy Fordham has died age 59 after being beset by health problems over the years. Pictured: with wife Jenny in October 2020 – the last known photo of him before his death 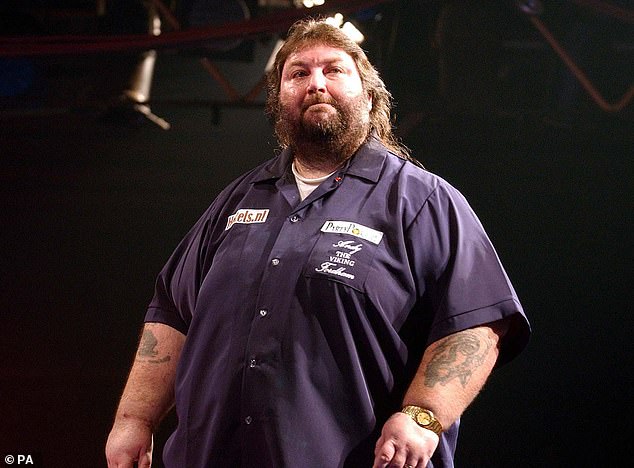 The Bristol-born darts icon died on Thursday with his wife, Jenny, by his side.

Following Fordham’s world championship triumph, he faced off against Phil Taylor in a box office clash titled The Showdown.

The 59-year-old was taken unwell during the match and defaulted at 5-2 with health concerns raised after it came to light that he would drink heavily before taking to the oche.

Fordham’s final professional appearance came in 2018 at the World Masters. He was hospitalised in March 2020 with a bowel problem, leading to him having 16 litres of fluid drained from his body.

Throughout his illustrious career, he faced numerous health scares.

In January 2007, ‘The Viking’ collapsed and was rushed to hospital after suffering with severe chest pains and breathing issues.

He had suffered a minor stroke, and Fordham revealed at the time that he aimed to be back playing darts within ‘six weeks’.

After being told he might need life-saving bowel surgery last March, Fordham told the Sun he would ‘keep fighting until I can’t fight anymore’.

He added: ‘There have been a few things gone wrong and it’s all down to alcohol.

‘If you drink too much, have a look at my story – you see it isn’t worth it. I’m not proud of it.

‘It doesn’t just ruin your life, it can also ruin many other people’s lives too.’ 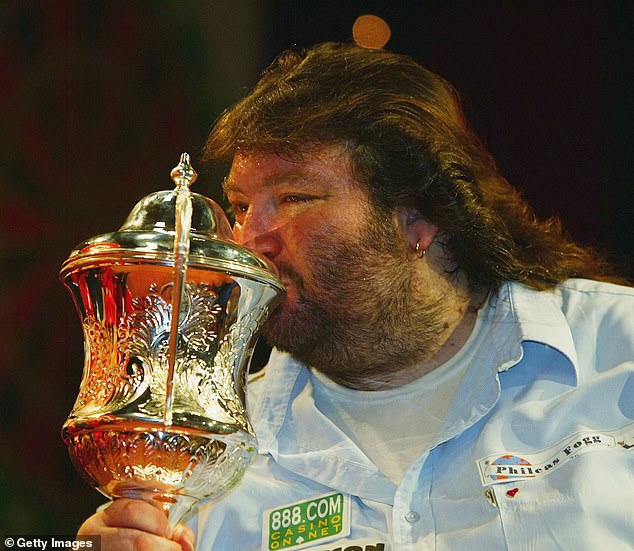 At the peak of his career, the Viking was crowned world champion in 2004 after defeating Mervyn King at the BDO World Championship

Tributes have poured in for the fan-favourite from across the world of darts.

Former world champion Adrian Lewis said: ‘Sad to hear the passing of a legend Andy Fordham our thoughts are with his family.’

‘Such sad news that Andy Fordham has died. A true legend and gentleman of the sport. My thoughts are with his family and friends,’ Rob Cross posted on Twitter.

Former pro Kevin Painter said: ‘Absolutely devasted to hear the news that Andy Fordham has passed away, a darting legend and one of the nicest guys on the planet, thoughts are with the family at this time… RIP Andy.’