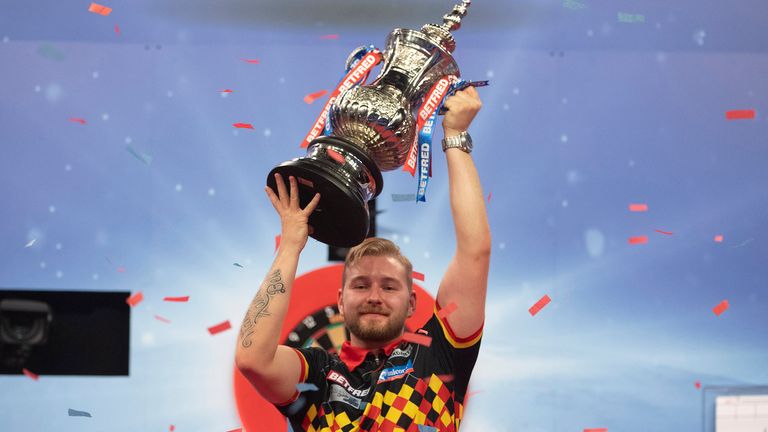 Awaiting Dimitri Van den Bergh is not so much a homecoming but perhaps more of a long overdue greeting as he heads to Blackpool as the only defending World Matchplay champion in the tournament’s history still yet to have made his Winter Gardens bow.

It is approaching a year since the Belgian iced a dream debut in the competition by defeating Gary Anderson 18-10 in what marked his first-ever PDC major final, the sole negative having been the absence of fans after the event was re-located behind closed doors in Milton Keynes due to the coronavirus pandemic.

In slightly more subdued celebrations than a Matchplay winner might typically expect, a victorious Van den Bergh retreated to his hotel room with a garlic sizzler pizza from a fast-food takeaway across the road and the company of the Phil Taylor Trophy.

Serenaded by Pharrell Williams imitations from an eagerly-awaited crowd, The DreamMaker will finally get the champion’s reception he deserves. 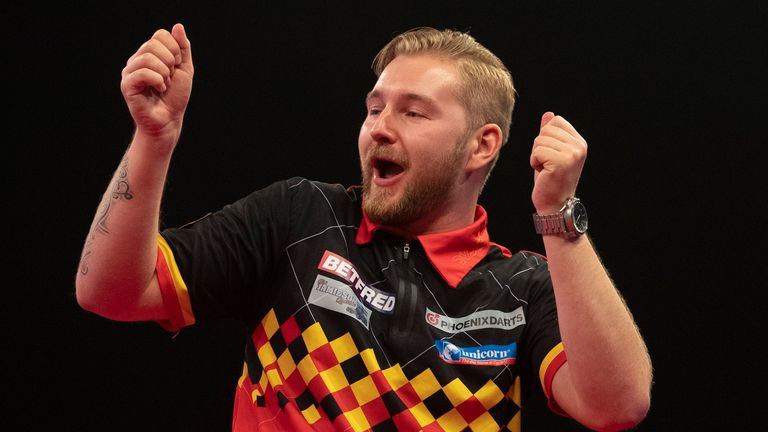 Van den Bergh recalls tuning in to the Matchplay as a fan to watch fellow countryman Kim Huybrechts prior to his emergence on the circuit; he cites enthralling battles between Phil Taylor and Adrian Lewis, The Power’s majestic ton-plus averages, Rob Cross’ fairy-tale story, Michael van Gerwen’s 2012 nine-darter.

He may be a first-timer, but the 27-year-old knows what it means to step inside the historic darting amphitheatre.

“I’m definitely very excited, because I only hear good things about the venue and many players say that Winter Gardens is their favourite venue, the atmosphere, the building, they just love it so I’m very curious to know how it’s going to feel for me and how much I like it,” he said. “Let’s hope I can make history repeat itself.”

The year has been a whirlwind for Van den Bergh in more ways than one. At the height of lockdown he lived with Peter Wright as travel restrictions denied him the chance to fly home to his native Belgium, before going on to experience Matchplay glory, reach the semi-finals of the Grand Slam followed by the quarter-finals of the World Championship and flourish in his maiden Premier League campaign, during which he topped the table on five of the 16 nights and was inside the top four after 11 nights overall.

In the meantime he also completed a permanent move over to the UK in a bid to further his blossoming career.

When he can, Van den Bergh affords himself a moment to soak it all up as he witnesses the hard work being rewarded.

“That’s what I 100 per cent did in those three months last year, the three months we had nothing to do and everybody had to be in lockdown, I reflected on life very well and thought about where I’d come from, how far I’d come, what I could do better, what are my dreams, what I want to achieve and all of that stuff definitely made me realise that I am a very lucky young man to do his hobby as his professional career,” he added. 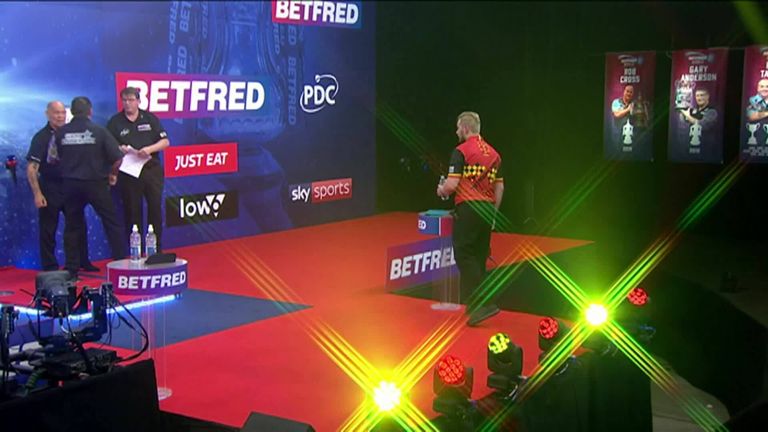 At the same time, warranted self-appreciation is balanced out by recognition for the incredible depth of talent around him as well as the young prospects rising through the ranks to challenge the sport’s elite, the latter of which he knows all about.

He has seen players rise and fall regularly enough to realise there is no resting on the job, not if you intend on sticking around.

“I got told the PDC is like a train, if it misses your stop then it’s hard to catch up so you’ve got to just continue and make sure you don’t miss that train and that you keep working hard and whatever comes, comes.

“I’ve learned something from somebody that I always take on which is ‘hard work beats talent if talent doesn’t work hard’ and that’s why I just want to keep working hard.

“You don’t want to be one of those players that was successful at one time and then just slips out and nobody talks about anymore. You just want to continue being successful in what you do and what you love, because otherwise it’s going to hurt a lot if you don’t.” 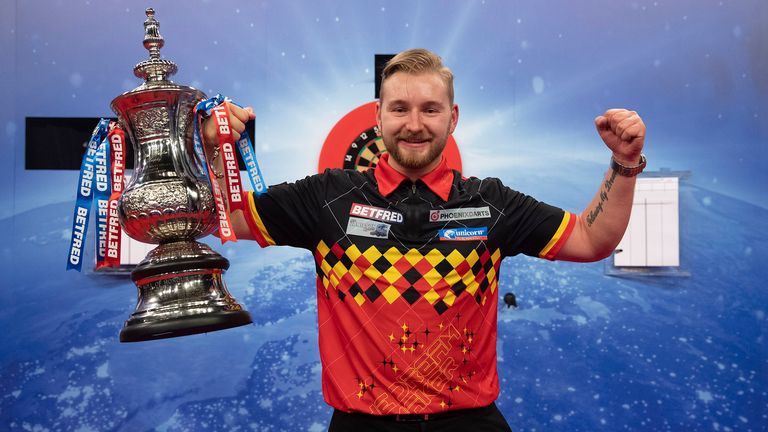 “I always think about the PDC that make it possible for us to play tournaments in times that the world is going through. We’re here for the darts, we’re here for that career so if anything could go wrong it’s the coronavirus that can stop us and that’s something I want to avoid. Every tournament we can play I thank the PDC massively for making it happen.”

Van den Bergh thanks the PDC

The ‘one game at a time’ mentality remains customary, particularly in an era when anybody can beat anybody. But Van den Bergh isn’t afraid to look at the wider picture or map out the years ahead; he knows what he wants and plans to go out and get it.

“I once got the question of how many times do I see myself winning the Worlds in 20 years and I said that maybe three times would be not a number that would make me arrogant or cocky but also still one of them that says if you want to win you have to believe in it,” he said.

“In 20 years who knows how many times? I’ve done it in the Development Tour, obviously it’s a little bit different there but the last 16 is like the Pro Tour, all of these guys have over 100 average and big finishes and keep you under pressure and most of them are playing at the Pro Tour so if I can do it there why wouldn’t I be able to do it in the future?”

For now though his focus is solely on Blackpool, where he begins the defence of his crown against fellow shape-thrower Devon Petersen in a fitting welcome back for fans.

“I know that me and Devon are those types of players that do a bit of entertaining before the game starts so it’s definitely going to be nice bringing some smiles to the people but as soon as the Mastercaller says ‘game on’ we’re there to do a job,” he said.

“That’s something I’ve learnt and cannot forget. I’m going to do a bit of entertaining, I’m going to give the crowd some fun and then it’s back to business. 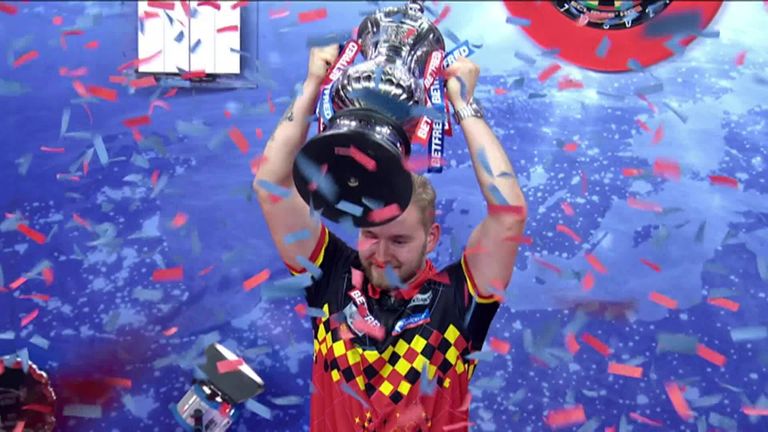 “I never underestimate anybody and if you get yourself qualified for the World Matchplay that just says enough about you and the way you’re playing. In that case I just take Devon the same as I would take Van Gerwen or Gerwyn Price, I don’t make any differences.”

From the pre-match dancing and down-to-earth personality to his steely composure and exquisite technique, Van den Bergh has become one of the most popular figures on tour among those that watch him.

That adoration is very much a two-way street.

“If I’m doing tournaments, if I’m playing exhibitions, it doesn’t matter where I am, if fans come up to me then it’s just brilliant that I can make them smile with a signature or a photo or a quick chat and that’s for me what makes it special and beautiful just to make people happy with what I do,” he said.

“If I can be somebody’s inspiration why not? I’m doing my 100 per cent best to be a good example to my younger brothers so why wouldn’t I be for other people? Besides that I love it and always thank the fans that support me.” 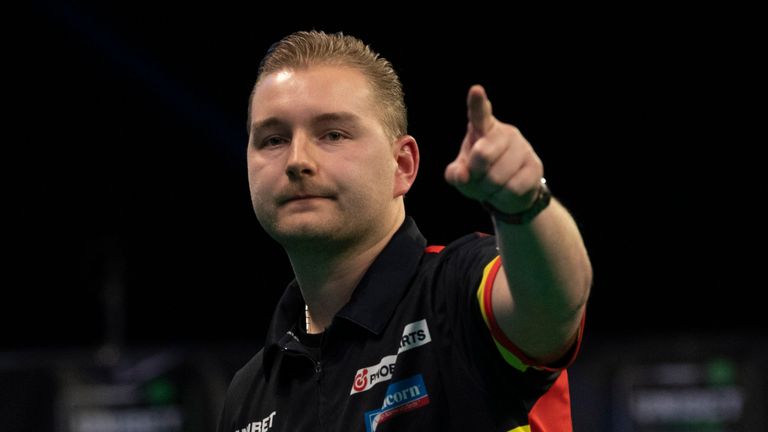 Van den Bergh on what he will carry over from 2020

It isn’t quite a case of ‘been there and done it’ for Van den Bergh, when only really the latter part of that phrase applies.

He enters the Matchplay with a new kind of pressure, that of a reigning champion.

“I don’t know how I’m going to handle that,” he said. “It will be my debut at the Winter Gardens so I have no idea how I’m going to react and deal with it but at the end of the day I just go up there and I’ve got to do my job and focus on it and we’ll just see what’s going to happen.”

Darts is back on your Sky Sports screens this month, with nine days of coverage from the iconic Winter Gardens and the World Matchplay – the action gets under way on Saturday July 17.