Send any friend a story

As a subscriber, you have 10 gift articles to give each month. Anyone can read what you share.

MULLENS, W.Va. — Christy Martin put a sweet tea and a Sprite on her tab at Second Street Station on a recent afternoon. She had only a $100 bill and didn’t want to trouble the waitress by asking her to break it. The restaurant knew Martin was good for it. Everyone in this former mining town knows her.

Martin, 54, is largely credited with legitimizing female boxing in the modern era. The first female boxer to make the cover of Sports Illustrated, she went undefeated for a decade, achieving success but secretly living a tortured life.

It was her second experience of fame — a terrifying, nearly fatal one — that finally set her free.

Martin fought for the first time in a West Virginia “toughman” contest in 1987, the first year women were allowed to compete. She had never attended a professional fight, never been to a boxing gym or put on gloves, but she was a star basketball player in high school and college and decided to give it a shot. Martin easily won the contest.

She continued to train and compete, and in 1991 teamed up with a trainer named Jim Martin. A year later, he proposed marriage. Soon Don King, the boxing promoter, came calling and put Martin on his cards.

In 1996, she defeated Deirdre Gogarty in a well-received bout that was televised on Showtime, giving new credibility to women’s boxing. Her Sports Illustrated cover sold out around the world. Her new status began to sink in when she was walking down Rodeo Drive in Beverly Hills.

“It’s nothing but real stars there, whether it be athletes or actors — real stars — and I’m walking by a Versace store and these people that worked there came out onto the street and asked for my autograph,” she said. “It was crazy to me.”

But she never got comfortable with fame. During an interview at the restaurant in Mullens, she hunched her shoulders in discomfort at the thought of it.

That’s in part because her husband, Jim Martin, never gave her the chance to believe in her own success.

“He told me the boxing world hated me, that my family hated me, that I didn’t have any fans,” she said. “Athletes have heavy egos, but they’re fragile. And it didn’t take long for him to break me.”

The pattern of emotional, financial and sometimes physical abuse continued for 20 years. As her career grew, so, too, did his threats of violence and isolation. The boxing ring provided solace.

“You can be aggressive, you can be strong, you can be all those things, you know, a winner,” Christy Martin said. “That’s where I could be me. On the outside is where I was beaten down, even though I faked it and tried to make people think that I was so confident.”

Jim Martin threatened to share one of her biggest secrets: She was gay. She told him about her sexuality when they first began working together, but he chose to ignore it for much of their relationship.

By 2010, her career was winding down and her marriage was all but over. She had reconnected with a former girlfriend and decided to leave her husband. One day, she lay down for a nap in their home in Tampa, Fla., when she heard Jim Martin sharpening a knife. She heard him say over the phone that she was a lesbian and that she was leaving him for a woman.

Then he walked into the bedroom and stabbed her multiple times, including in her chest and legs, before shooting her in the chest with her own pink-handled 9-millimeter Glock.

“He left me for dead,” Christy Martin said.

When he got in the shower, she somehow got up and stumbled outside, managing to flag down a passing car. A stranger took her to the hospital. Quickly, she went from being a famous boxer to a famous headline.

But when her fame changed, it changed for the better.

“Jim had convinced me that if the world found out I was gay, I would lose everything, and really just the opposite has happened,” Christy Martin said. “I’m comfortable with my own skin. I don’t have to hide. I am who I am.”

Christy Martin finished her career with 49 wins, seven losses and three draws, with 31 wins by knockout, and was inducted in 2020 into the International Boxing Hall of Fame. In 2017, she married a former sparring partner, Lisa Holewyne. Martin has a boxing promotion company that she runs out of Austin, Texas. At most events, she reaches out to local domestic violence shelters. And every Nov. 23, the date of the attack, she calls the stranger who saved her.

In 2016, a West Virginia teacher told Martin that one of her eighth-grade students had selected her for her state history project.

“Out of 200 years, out of all kinds of people, she chose me,” Martin said, still surprised. “I was so touched.”

Martin spoke with the student and later visited her classroom.

“That’s the fame part that means something,” she said. 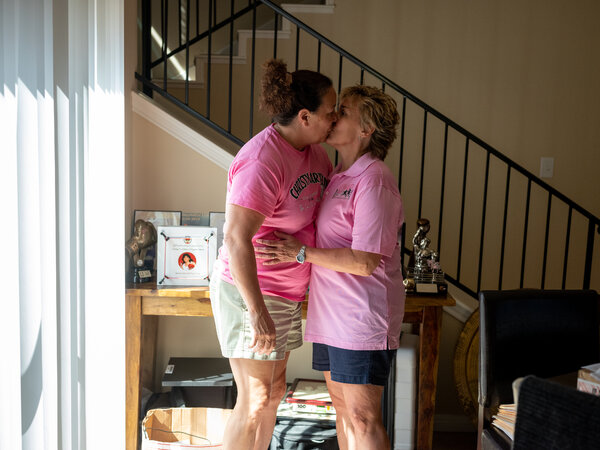