So, you reckon the Olympics have run their race? Time to fold up the five rings and tuck them away in the back of the garage behind the ping pong table?

They’re just a big old money maker for those fat cats of the International Olympic Committee; a glorified sports carnival for global corporations to spruik their fizzy drinks, expensive watches and fancy TVs.

And, for the host cities, they’re a money bonfire. Brisbane! Annastacia! What are you doing? Abort. Abort. Abort.

If you’re not feeling the Olympic love before Friday night’s opening ceremony in Tokyo – given the world is grappling with a lethal pandemic, that’s entirely understandable – consider the story of Nathan Katz, an Australian judoka who’s been busting his arse, ribs and back so he can compete. 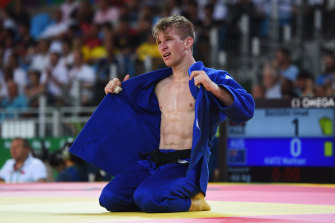 Nathan Katz’s journey to Tokyo shows why the Olympics are still important.Credit:Getty

On Sunday, at the world-famous Nippon Budokan, five years of hard work and torture of his body could end within a minute – and he couldn’t be happier.

“Judo is so cruel,” Katz told me. “Sunday could change your life or it could be over in 30 seconds. That’s the reality of our sport. It’s all or nothing. You can go out in the first round, thanks for coming, or go on and win gold.”

Somehow, somewhere along the line, we’ve forgotten what the Olympics are about: the athletes and the sacrifices they’ve made just to be there.

Remember when that meant something?

Last month, Katz was sitting in hotel quarantine with his brother, Josh, having just returned from the world championships in Budapest in Hungary.

It was their third two-week stint in the past year, having traversed the globe trying to qualify for Tokyo.

The first two hotel quarantines were tough but this one was nearly impossible because they hadn’t done enough to earn selection.

In the past year, 26-year-old Nathan has needed cortisone injections after suffering broken ribs and also endured a bulging disc and stress fractures in his back.

As he and his brother sat in a hotel room, staring at the blank wall, they wondered: is this all worth it?

“A room, just the two of us, no open window, it was pretty grim,” he recalled. “There were a few calls to Jimmy Brings. Thankfully, we could get some grog in there. We lived for the footy from Thursday to Sunday. Quarantine brings out the best and worst in you.”

A few weeks ago, Katz was driving to his girlfriend’s house with a bottle of wine and Chinese takeaway on the passenger seat when his phone buzzed. He was told there may be a vacant spot so start training again.

“I nearly crashed the car,” he said. “It was a complete shock.” 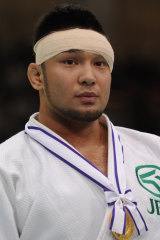 This is where the story gets messy.

The position had become vacant after another Australian competitor, Kayhan Ozcicek-Takagi, was reported for match-fixing in the 100kg or under division at the world titles.

Ozcicek-Takagi was born in Sydney but moved to Japan with his parents when he was still a boy. He was the 2015 Asian champion but pledged allegiance to his country of birth and sat out the mandatory three years of international competition so he could represent Australia in Tokyo, where he resides and competes professionally.

In his written evidence to the International Judo Federation, he insisted he had a back injury heading into the event and provided evidence showing he had been undergoing treatment.

Australian coach Daniel Kelly, though, told the IJF his competitor had given no sign of a back complaint.

On June 24, the IJF gave Ozcicek-Takagi a “serious reprimand and warning” but no ban and no specific finding of misconduct.

He has since appealed that decision in a bid to clear his name, but in the meantime Judo Australia refused to nominate him for Tokyo based on the IJF’s finding, claiming he wasn’t a “positive ambassador”.

Ozcicek-Takagi appealed his non-nomination to the Court of Arbitration for Sport but it was dismissed. On July 12, Katz was in – and Ozcicek-Takagi was out.

Ozcicek-Takagi intends to speak on the matter at some stage but, according to those close to him, is heartbroken about not competing in Tokyo.

It has nothing to do with Katz but the episode shows the rollercoaster ride many athletes endure in sports where the Olympics are the pinnacle.

While critics can easily dismiss them as an extravagance the world doesn’t need right now, tell Katz they’re not worth it.

“I can understand why people say it’s a lot of effort in the middle of a pandemic in a crazy world,” he said. “But this is the pinnacle of my life. So, yes, it’s worth it.”

If you ever needed any evidence that rugby league is a funny old game, may I present Exhibit A: Tevita Pangai jnr.

He was so destructive in the early parts of 2018 that he became a verb. Defenders who couldn’t stop him were easily trampled. “Welcome to the club. You’ve been just been Pangaid”.

Instead of becoming the game’s Next Big Thing, he became the poster boy for the whingy, entitled, overpaid player that has been the problem at the Broncos for the last three years.

Now he’s secured a $2.2 million, three-year deal with the Bulldogs from 2022 and a short-term deal with the Panthers for the remainder of this year on about $25,000 per game and could end up with a premiership.

New Bulldogs boss Phil Gould and coach Trent Barrett will be hoping to unlock the brilliance in Pangai jnr that Brisbane could not.

It’s common knowledge that Wayne Bennett is a huge believer in the 25-year-old tearaway. When Bennett went on his “blame the clubs, not the players” rant when asked earlier this month about the blowout scorelines, many interpreted it as a shot at the Broncos about not getting the best out of certain superstars, especially TPJ. 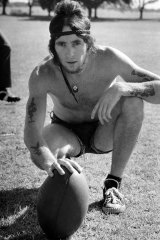 Bon Scott with a football at Centennial Park in 1970, before he was frontman for AC/DC.Credit:Philip Morris

Apparently so as these images from author Jeff Apter’s forthcoming biography of the late, legendary musician called Bad Boy Boogie.

“This was 1970, when he was in a band called Fraternity, and for a time had a residency at a Sydney venue named Jonathan’s (later the Phoenician Club) and they shared a house on Jersey Road in Woollahra,” Apter said. “They’d often get together with the guys from Sherbet, who opened for them, and kick a ball around Centennial Park. Bon had the eye of the tiger, didn’t he? Don’t know if his kicking skills were much, though.”

The book is out August 3.

Much respect for the good people of the Bellingen Valley Dorrigo RLFC and, particularly, the Bonventi family who are raising money for the Mark Hughes Foundation this weekend.

Vicky Bonventi was diagnosed with a 6.5 centimetre brain tumour two years ago and was rushed to John Hunter via care flight for surgery. The MHF helped her and the family through a rough time, as they have for dozens of others.

Now she’s back on her feet, she’s giving back to the foundation.

The Magpies have jumped on board, letting Vicky run a raffle and sell beanies at their last match of the season against South Grafton this Sunday afternoon.

Typically, local businesses in the area have helped with raffle prizes. So have some of the game’s superstars, including homegrown talent Dylan Edwards with a signed Panthers jersey and Latrell Mitchell with a signed Roosters jersey. The NSWRL chipped in with a signed Blues jersey at short notice.

If you can get to Bello Park, make sure you buy a raffle ticket. Otherwise, you can donate at markhughesfoundation.com.au.

“It is likely that the positive result was from a single recreational use of the drug at a social event and had no connection with my sport of equestrian.” – Show-jumper Jamie Kermond, whose Olympics are over before they even started after testing positive to cocaine. Note to aspiring Olympians: avoid the Colombian nose beers before the biggest event of your life.

Thumbs up
The first episode of Fox Sports’ fly-on-the-wall doco inside the troubled Wests Tigers was fascinating, although I did feel like I was watching rugby league’s version of The Office with Justin Pascoe as David Brent. The hair. The arm tats. The f-bombs. Now that’s a boss you want to play for.

Thumbs down
The send-off of Wallabies winger Marika Koroibete for a high tackle in the fourth minute against France was one of the silliest things ever seen on a rugby field. The Wallabies won, and he was cleared by the World Rugby judiciary, but if there was ever an argument for 20-minute red card, this was it.

It’s a big weekend for …
The relocated Sydney Swans following their emotional, COVID-affected win over GWS on the Gold Coast. They meet the Dockers at the same venue on Sunday.

It’s an even bigger weekend for …
Skateboarding as it makes its Olympic debut at the Tokyo Games. The men’s street – that’s the one where they are getting sideways on a handrail, don’t try it at home – will be held on Sunday. Watch out for Australia’s Shane O’Neill.