Kieren Perkins, the king of world distance swimming retired from the pool 10 months ago – last night the abdication was completed as Grant Hackett donned the crown. 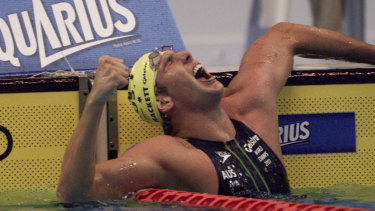 Hackett, already the Australian, Commonwealth, Olympic and world champion, had only one task remaining before he was allowed to step out of the shadow cast by his former rival.

But Hackett didn’t just take a step last night in the Marine Messe Pool, he took a massive leap into the world record books by not only breaking, but obliterating a time which has stood for seven years, and one which many thought would last a lot longer.

Hackett climbed from the pool having swum 14 minutes 34.56 seconds in the 1500 metre world championship final, hacking 7.10 seconds off the mark Perkins set in Victoria, Canada, at the 1994 Commonwealth Games.

The monkey Hackett has carried upon his back for several years had finally decided it was time to hop off.

“It’s been a monkey on my back for so many years now,“ Hackett said. “This is something really special. I wanted that record really badly and I wanted to dig really deep tonight. For me it’s been a build-up over many years. I went out there with an open mind and I didn’t so much focus on the record, regardless of how much I wanted it.

“I put my heart and soul into that race. I said to myself tonight: ‘What can you do Grant?’”

Hackett was met on pooldeck by Perkins, who told him he had just watched the swim of the meet.

Asked if he had any regrets about erasing the name of a legend from the world record books, Hackett said: “No way. I’ve worked just as hard as Kieren has over the years.”

From the first 50m Hackett was out on his own and as each lap passed the lonelier he looked out in front. His fitness and form were there – he’d shown that earlier in the meet when second to Ian Thorpe in the 400m and 800m. Now he had to win it in his head.

Early on it looked as though it would once again be close. He was just 0.19 seconds ahead of the world record pace at the 400, and only slightly better the next time he came to that end of the pool. Then it happened: his cushion had extended to more than a second. By the 800, the gap was 1.53 seconds, and his time, 7:44.47, was the fifth fastest ever swum over that distance.

From there it continued to balloon. When it got to more than four seconds at the 1100, it was obvious the Perkins’ name was about to disappear from the record books.

As the laps counted down, few people remained seated. At the finish Hackett looked at the scoreboard with a look of disbelief at how quickly he had gone. Then jubilation kicked in.

Australia capped its most successful championships ever when the women’s 4×100 medley team won gold in the last event of the titles.