PARIS — This golden age of men’s tennis got a little shinier on Friday night. It is harder to deepen the impression at this advanced stage: after all the comebacks, marathon duels and winners under pressure over nearly 20 years of close character study. But Novak Djokovic and Rafael Nadal, in their 58th meeting, still found something inside themselves that spoke to their public, which was allowed the privilege of staying in their seats past the 11 p.m. curfew by the French authorities.

It was the right move on many levels. It might have prevented a riot, but above all it was welcome because clearing the main Philippe Chatrier Court would have stopped the flow of a great match that was transcendent in part because of the force of its tidal shifts.

The third set was the best example, and one of the most compelling sets to be played at Roland Garros: 91 minutes of grit and pure talent reflected in both grinding rallies and bold swipes of the racket from all sorts of compromised positions. No two tennis players have been better at turning defense into offense, and no two men have played each other more often in singles in the Open era.

It was 5-0 Nadal after five games, but Djokovic worked his way back with deep focus, channeling his intensity. There were no screams on Friday night like the one he produced after beating Matteo Berrettini on this same court on Wednesday in another late night match.

As against Federer in the 2019 Wimbledon final, Djokovic seemed to grasp that he did not have mental energy to squander. He prevailed on Friday because he was the steadier flame down the stretch and the more devastating returner.

Nadal and Roger Federer are tied for the career men’s lead at 20 and might remain forever tied. But Djokovic is closing and, as he proved again on Friday night, he remains capable of beating the men on their surfaces of choice.

He also holds the career edge over both: 27-23 over Federer and 30-28 over Nadal who could have reeled him back in with a victory. 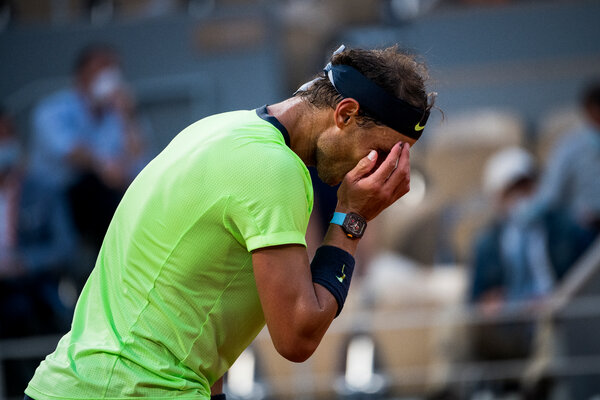 Djokovic is now the only man to have beaten Nadal twice in Roland Garros, with the first victory coming in the 2015 quarterfinals when Nadal was in a rare funk.

But Djokovic’s achievement this year is more impressive when you consider that Nadal had beaten him five times in a row on clay, including last year’s straight-set romp in the French Open final and last month’s Italian Open final.

Though the mood leaned toward superlatives on Friday night, they have played consistently high quality matches against each other (the 2018 Wimbledon semifinal) and longer matches (the 2012 Australian Open final).

Nadal had moments of greatness in this semifinal, but was not routinely great, missing backhands by the bunch and losing his way in the crucial third-set tiebreaker with a double fault and a rare missed forehand volley into an open court.

“These kind of mistakes can happen, but if you want to win, you can’t make these mistakes,” Nadal said with typical clarity and humility.

Certainly not against a champion of Djokovic’s caliber. The crowd, limited to 5,000, sensed the vulnerability and urged Nadal on. It was a sign of how his relationship has deepened with the Roland Garros public. When he lost to Robin Soderling in 2009, he was wounded by the crowd’s hostility. But he has earned their respect and some of their allegiance with his point-by-point commitment.

Djokovic had his share of support as well, but to get to 19, he still has one more hurdle, and though he will be a favorite in the final, the 5th-seeded Stefanos Tsitsipas should not be underestimated.

Tsitsipas, a hirsute Greek with a one-handed backhand and an all-court game, has beaten Djokovic twice already on Djokovic’s favorite surface: outdoor hardcourts. Tsitsipas is prepared for this late stage in a major, and his purposeful walk between points is a hint at his inner drive and aggressive instincts. He can win points in all manner of ways, but his best chance against Djokovic may reside in pushing forward.

They played in the semifinals of last year’s outlier of a French Open, staged in October after the French Tennis Federation shifted the dates because of the pandemic. Djokovic won the first two sets, but Tsitsipas rallied to force a fifth set and then ran out of steam more than belief, losing 6-1.

That is the challenge against Djokovic. He has the endurance and resilience under pressure to take your best shots, find solutions and impose his will in long Grand Slam matches. While it is tempting to think that Djokovic might be diminished by Friday’s 4 hour 11 minute effort, he already has proved that he can bounce back.

“It’s not the first time I play an epic semifinal in a Grand Slam and then I have to come back in less than 48 hours and play the final,” he said.

He has until late Sunday afternoon, and it bears remembering that Tsitsipas played a taxing five set semifinal on Friday as he held off Alexander Zverev.

“It’s time for me to show that I’m capable,” Tsitsipas said of Djokovic.

The Big Three have formed an unprecedented roadblock to the younger set, disrupting the normal cycle of men’s tennis. Federer is now an outsider at 39 but still a contender on quick courts like Wimbledon and is already back on the grass in Halle, Germany. Nadal just turned 35, and Djokovic recently turned 34.

The majors, not the No. 1 ranking, are his clear focus and after beating Nadal in Paris, thoughts of a Grand Slam are hardly out of the question. Djokovic once held all four major titles, but neither he nor Federer nor Nadal has completed a Grand Slam by winning all four major singles titles in the same calendar year. No man has achieved it since Rod Laver in 1969.

No matter how much it felt like a final, it was only the last step to the final, and now Djokovic will try to win his second French Open after beating the man who has won an improbable 13.