Netball NSW has criticised the state government’s 80 per cent vaccination road map, which has forced community sports to limit the capacity of their outdoor venues to 200 people.

Under updated public health orders, community sport will fall in the category of general outdoor gatherings as of Monday. Previously, sport and exercise were regulated under a separate section. 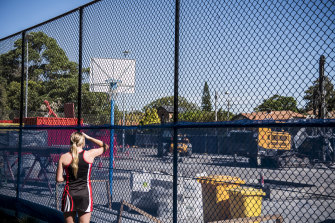 When NSW emerged from lockdown in 2020, community sport was restricted to 500 people outdoors.

Netball NSW’s general manager of pathways, Darren Simpson, said that had proved a disaster for community sports organisations, who had encouraged the state government to remove upper limits at the end of this lockdown.

Simpson said Netball NSW was informed by the state government on Saturday a 200-person gathering limit would remain for community sport as part of the 80 per cent restrictions.

He said the limit was detrimental to any summer competitions, which are usually wrapped up or a majority of the way through by December 1, when the public health order will again be updated.

Simpson said that despite requests from Netball NSW, as well as many other sports, the government had also failed to give guidance on how volunteers are expected to enforce the mandatory vaccination requirements at community sport.

“We have been talking to the government about the potential for this for a long, long time – like, I’m talking months,” he said.

“The sports, collectively, have been saying to the office of sport, ‘If we come back with an upper limit, it’s just unmanageable, it’s a disaster’.”

Simpson said a density-based policy, such as two people per square metre, would better suit most sports. Most netball associations, in particular, will be unable to operate at full capacity under the current limit.

“Most associations have somewhere between eight and thirty netball courts; the amount of space we are talking about is immense,” he said on Sunday.

“We just have to bring it to the government’s attention. It’s fantastic for you to say community sport is back, but it’s not really when there is a 200-person cap.”

Despite community sport being limited, capacities were doubled to allow 10,000 people to Royal Randwick for the Everest race day on Saturday.