‘Whatever happens the rest of my career, I’m a world champion’ Jake Wightman revels in his gold medal triumph and credits his parents support and sacrifices to his social life as catalyst’s for the success

An hour after the biggest achievement of his life, Jake Wightman stood in the mixed zone underneath the stands at Hayward Field, a look of delight and disbelief on his face – like a man who’d just walked into a surprise birthday party.

But by this point, a beautiful realisation was starting to set in. ‘Whatever happens the rest of my career,’ he said, ‘I’m a world champion.’ His father, Geoff, was just down the way, explaining to journalists how it felt to commentate on his son – who he has coached since the age of 14 – winning the world 1500m title. A minute or so after the race, Geoff had told the local crowd why he was being shown on the big screen.

‘That’s my son,’ he said. ‘I coach him, and he’s the world champion.’ Jake’s mother, Susan, stood behind him, still beaming a stunned smile, her eyes red from all the tears she’d wiped away over the previous hour. She usually gets too anxious to watch Jake’s races but promised that this time would be different. But with 200 metres to run, as her son shot past Olympic champion Jakob Ingebrigtsen in a do-or-die move, she couldn’t bear it. 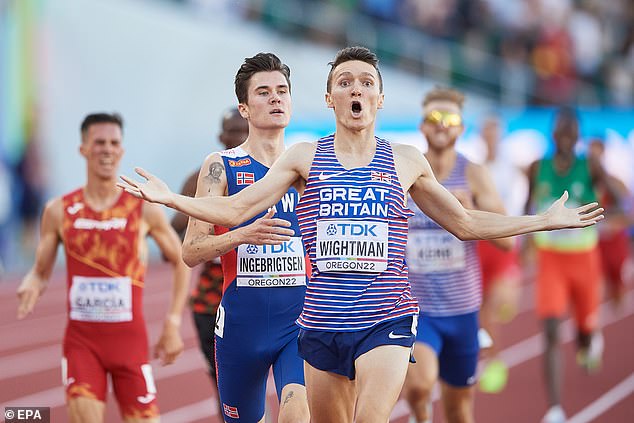 A euphoric Jake Wightman crosses the line to claim gold in the 1500m final in Oregon, USA 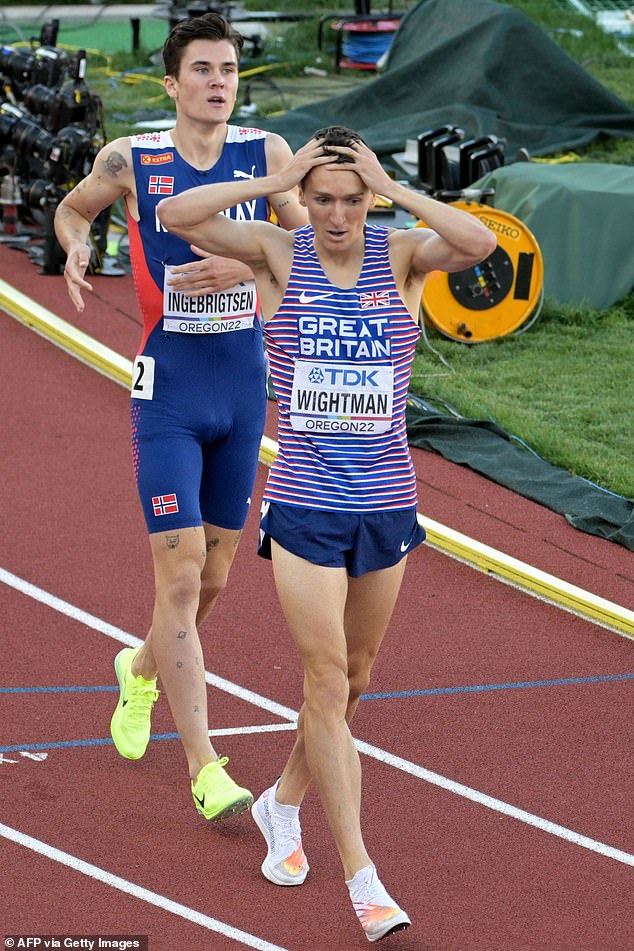 Up in the stands, Susan looked at the ground – hoping, waiting, wishing.

‘I missed the best part of the race,’ she later said. ‘It wasn’t until he crossed the line that I realised he won it..’ This was a journey the family had taken together, but athletics remains an individual sport. The athlete must pay the heftiest toll, their existence for so long stripped back to a life of monotonous toil – with no guarantees it will ever pay off.

‘The whole of my early 20s – sacrificing doing stuff with friends, saying no to stuff, having (a) social life I would crave – is all worth it for moments like this,’ said Jake. ‘When I’m retired and I’m fat and enjoying this, (I’ll) feel very proud that I did everything I could to get to this point. It’s all worth it..’ Every world champion is the product of both nature and nurture. Wightman is no different. Both of his parents were international athletes: Geoff represented England in the Commonwealth Games marathon; Susan finished 12th in the 1988 Olympic marathon. But their son was different, gifted with such a vast range of gears that meant his path would be forged on the track.

Jake grew up in Nottingham but the family moved to Edinburgh when he was 10.. His mother was his PE teacher at school, which meant his dad was roped in to commentate on school sports days. He’s been announcing Jake’s races for the past 17 years. 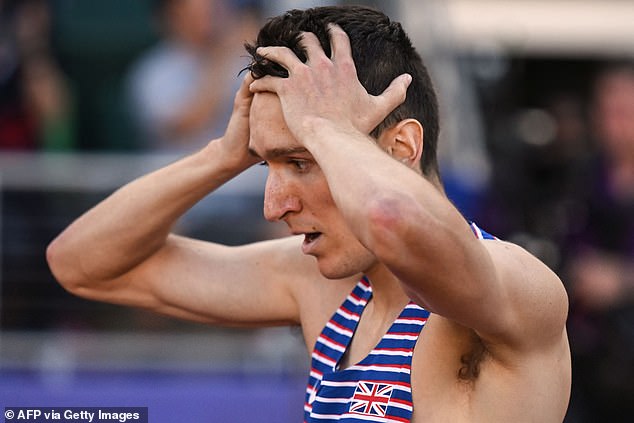 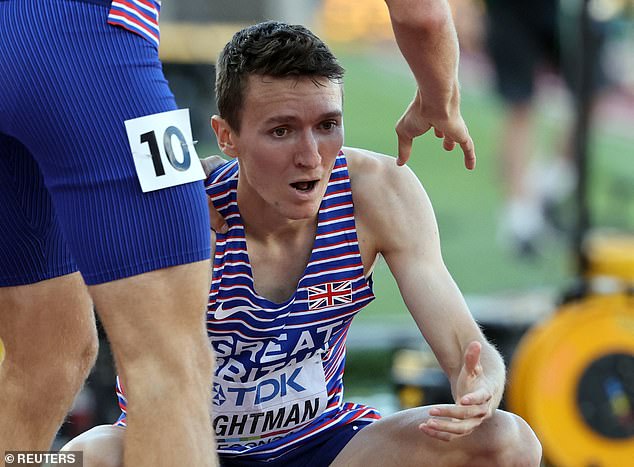 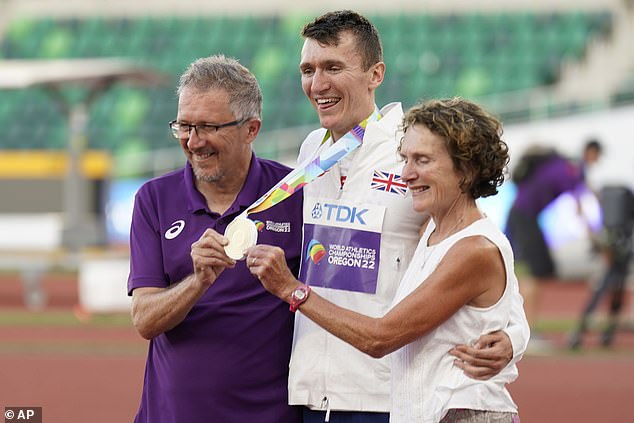 In the early years his parents shared his coaching duties with Geoff playing the key role thereafter, steering Jake through his university years at Loughborough on the rocky road to senior success. Wightman won bronze medals at the Commonwealth Games and European Championships in 2018, but fell short of what he truly wanted at global level: he was fifth in the 2019 world final, 10th in last year’s Olympic final.

‘Tokyo was way more disappointing than people realised,’ he said. ‘I’m not really a negative person but within myself, I felt pretty scarred by it.’ Wightman had looked majestic in winning his semi-final, but three top-level races in five days had proven too much, his tank running empty in the final. Geoff knew a key thing was missing – endurance – and in the winter they set about building it.

Track athletes typically hate cross country – often using the line that you wouldn’t drive a Ferrari in a mucky field – but that’s exactly where Jake found himself last November, slogging to a 14th-place finish at the Scottish Championships, which he described as ‘shocking’. Weeks later, he suffered through a 10km road race, finishing eighth, and during the indoor season he was well beaten in two 3000m races. 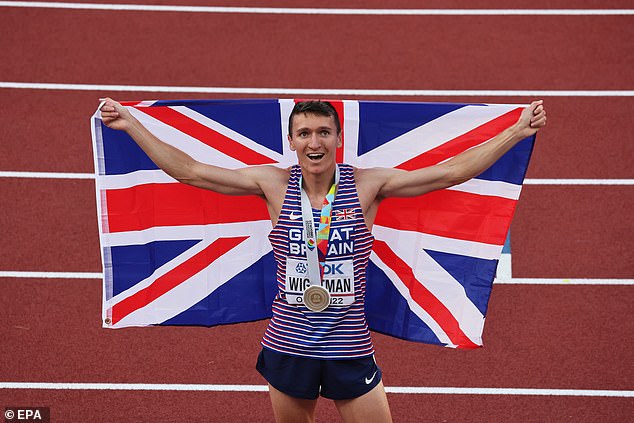 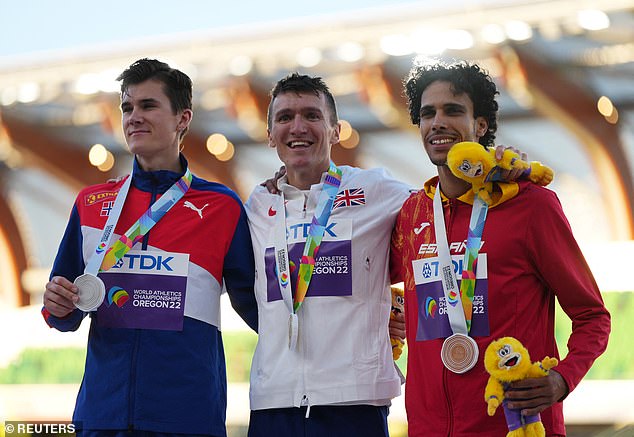 In Tuesday’s final, Wightman tracked the two big names – Olympic champion Jakob Ingebrigtsen and world champion Timothy Cheruiyot – until the final lap, then surged to the front down the back straight.

It was a bold, early move, one that could easily backfire.

‘I just thought, ‘screw this, I’m going to give it a go.’ If that ended up finishing fourth, whatever, I gave it a go to try and win it.’ Ingebrigtsen tracked him around the bend and tried to come again up the straight, but he just couldn’t get past, Wightman digging in and holding him off to win in 3:29.23 – the fastest time in the world this year. It made him Britain’s first world 1500m champion since Steve Cram in 1983. 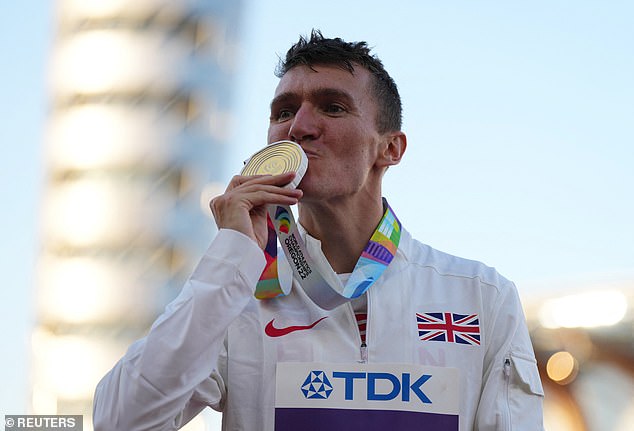 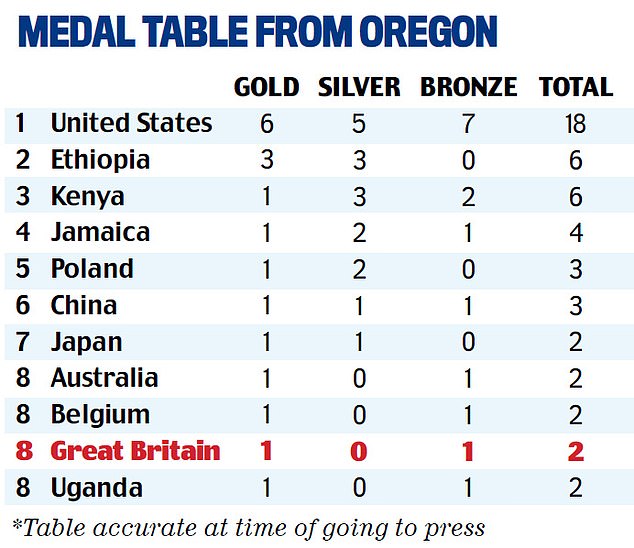 ‘There’s so many people that have helped me get to this point and my dad is obviously the biggest one,’ he said. ‘The main thing is to go around now thanking those who played a part. I hope it can mean as much to them as it does to me.’ Susan, after looking up and realising what Jake had done, ran down to greet him with a hug.

‘My mom crying is probably the first (moment) I realised how big a deal it was,’ said Jake. ‘But it’s when I’m on my own to soak it in and reflect that I’ll probably think how nuts this all is.’ How did Geoff manage to hold it together on commentary?

‘If I don’t keep it neutral during the 1500m, I don’t get to do it again,’ he laughed. ‘I love to do them so I can’t be biased; I have to be impartial.’ But as he looked down from the stands, seeing his son realise a dream they’d long envisioned, it felt like some magical illusion.

‘It was surreal watching him win gold,’ said Geoff. ‘I was thinking: I know that guy. He has a familiar look.’