The wife of Los Angeles Rams quarterback Matthew Stafford apologized on social media after a fan called her out for throwing a pretzel at a trash talker in the stands during Monday night’s game against the San Francisco 49ers.

Witnesses told TMZ Sports that Levi Stadium security had to step in and escort Kelly Stafford and her crew to their seats after the incident with a fan. 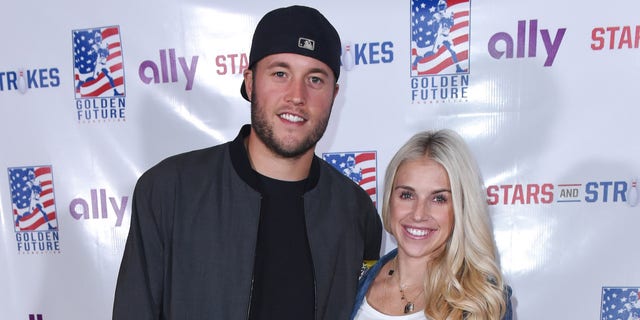 “Who do you think you are to do such a thing? You are lucky you didn’t hit me with it because the outcome would have been different for YOU,” the self-proclaimed Rams fan wrote. “Show some class and support your husband and his news team with grace please.”

Stafford replied back apologizing for what she called a “weak moment.” 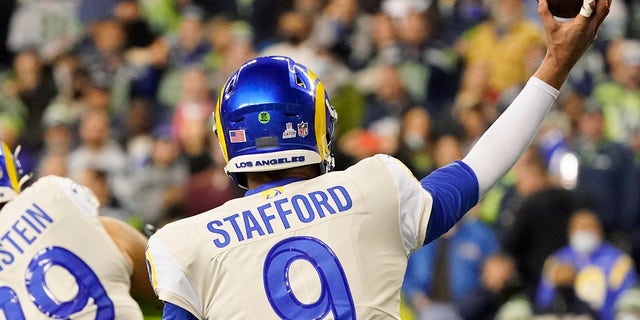 Los Angeles Rams quarterback Matthew Stafford (9) passes with tape on one of his fingers during the second half of an NFL football game against the Seattle Seahawks, Thursday, Oct. 7, 2021, in Seattle.
(AP Photo/Elaine Thompson)

“I’m an idiot,” she said. “He was saying a bunch of things that were aggressive towards our crew but zero excuse. I tried to apologize, but in the end, knew I was wrong.”

She continued: “Will always stand up for my guy and everyone I love, but obviously needed to do it completely different! I’m embarrassed too! Sorry you had to witness me in my weak moment!” 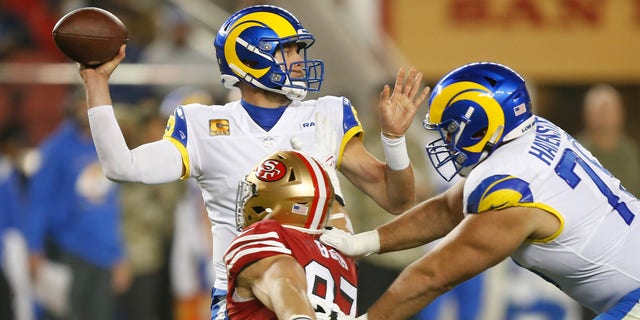 SANTA CLARA, CALIFORNIA – NOVEMBER 15: Matthew Stafford #9 of the Los Angeles Rams is pressured by Nick Bosa #97 of the San Francisco 49ers in the fourth quarter against the Los Angeles Rams at Levi’s Stadium on November 15, 2021 in Santa Clara, California. (Photo by Lachlan Cunningham/Getty Images)

Monday night will certainly be one worth forgetting for the Stafford family. The veteran QB went 26 for 41 for 243 yards with one TD, two interceptions, and nearly a third that K’Waun Williams trapped on his backside only to have it wiped off by a penalty.