FORMER football boss Mick Wadsworth has swapped his tactics board and cones for watercolour pencils and paper. 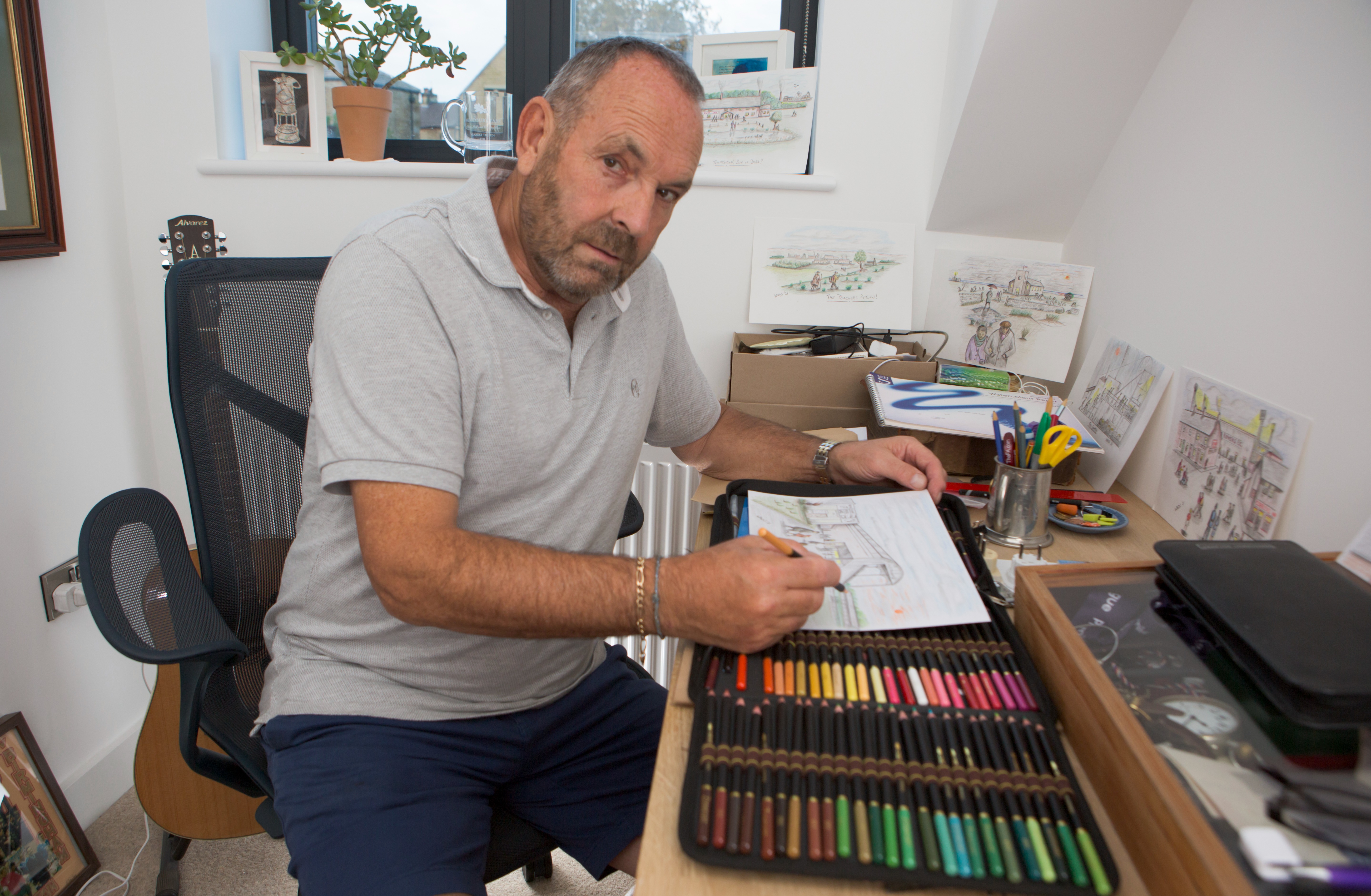 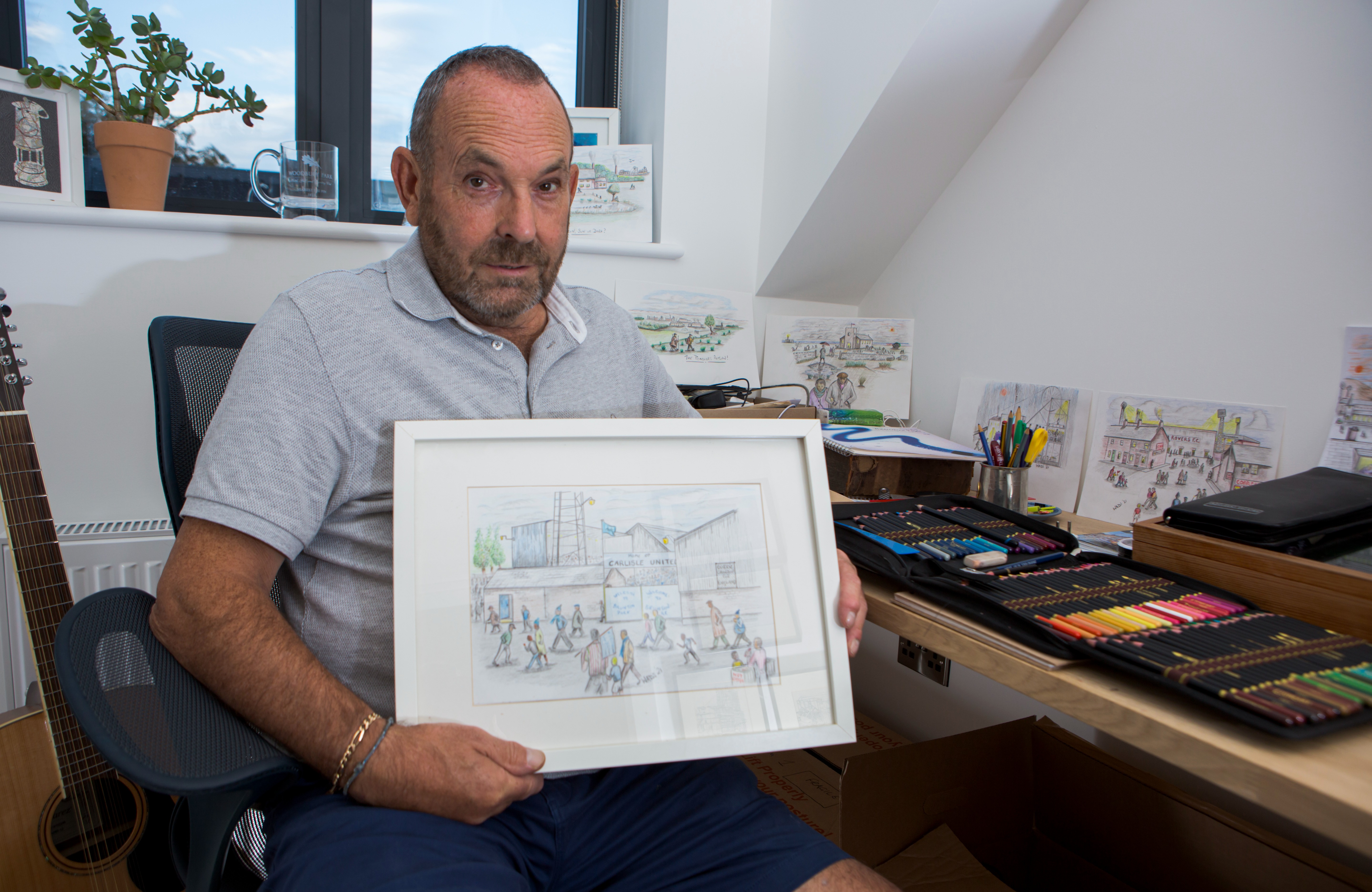 He was also assistant to the late Sir Bobby Robson at Newcastle, as well as on his England coaching staff at the 1990 World Cup.

But now he has turned his hand to art.

At the start of the pandemic, Wadsworth decided to fuse two of his biggest passions, football and drawing, to raise money for charity.

He has sketched a series of football grounds including Carlisle’s Brunton Park, Burnley’s Turf Moor and the now demolished former homes of Scarborough (Athletic Ground) and Darlington (Feethams) plus local scenes from his life.

On Saturday night, he is selling 12 of his charming framed sketches at an auction in Carlisle to raise funds for the Eden Valley Hospice, which cares for patients from Cumbria and south-west Scotland.

Wadsworth told SunSport: “Me and my Carlisle team were going to get together last year to mark the 25th anniversary of the club winning what is now known as the League Two in 1995. 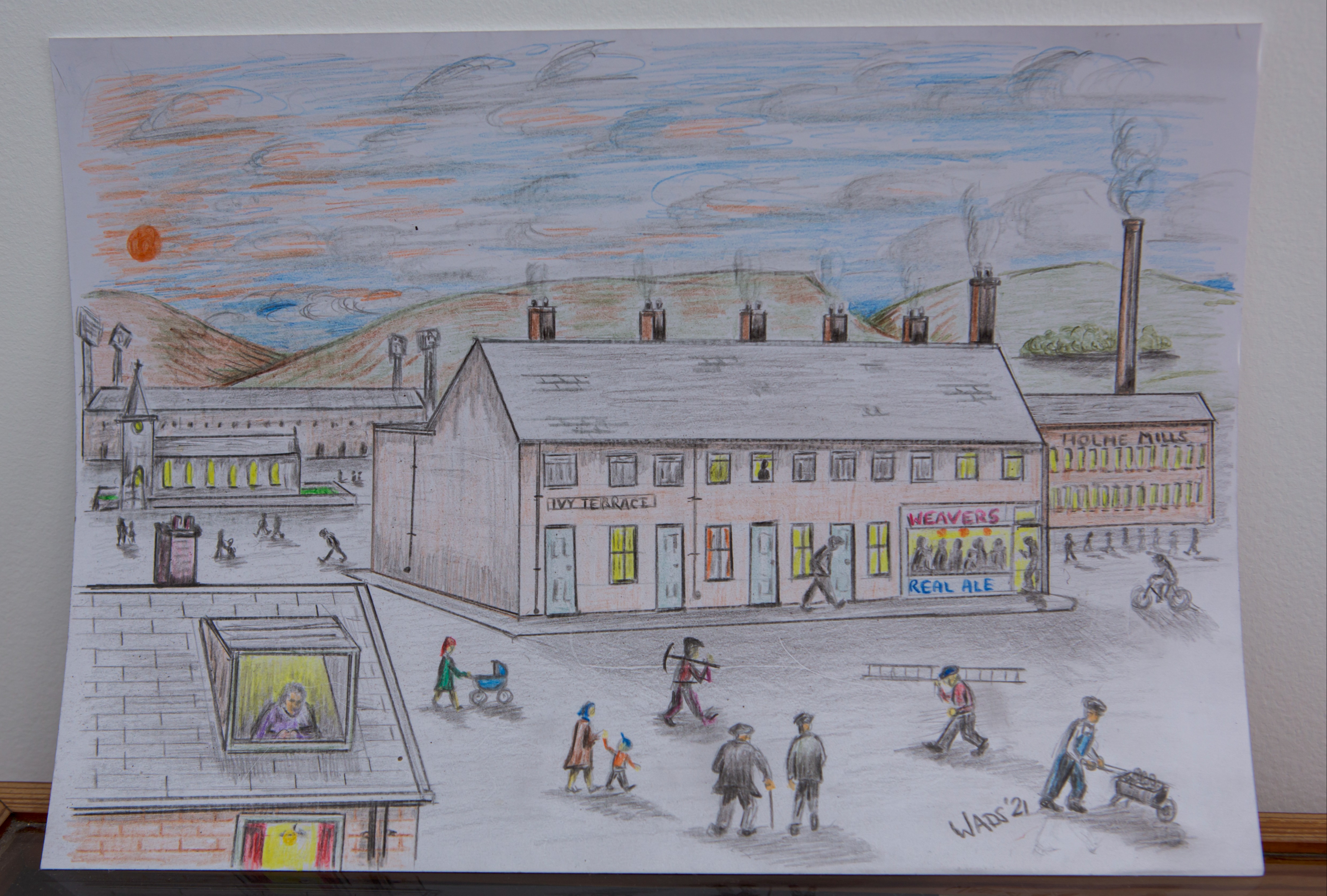 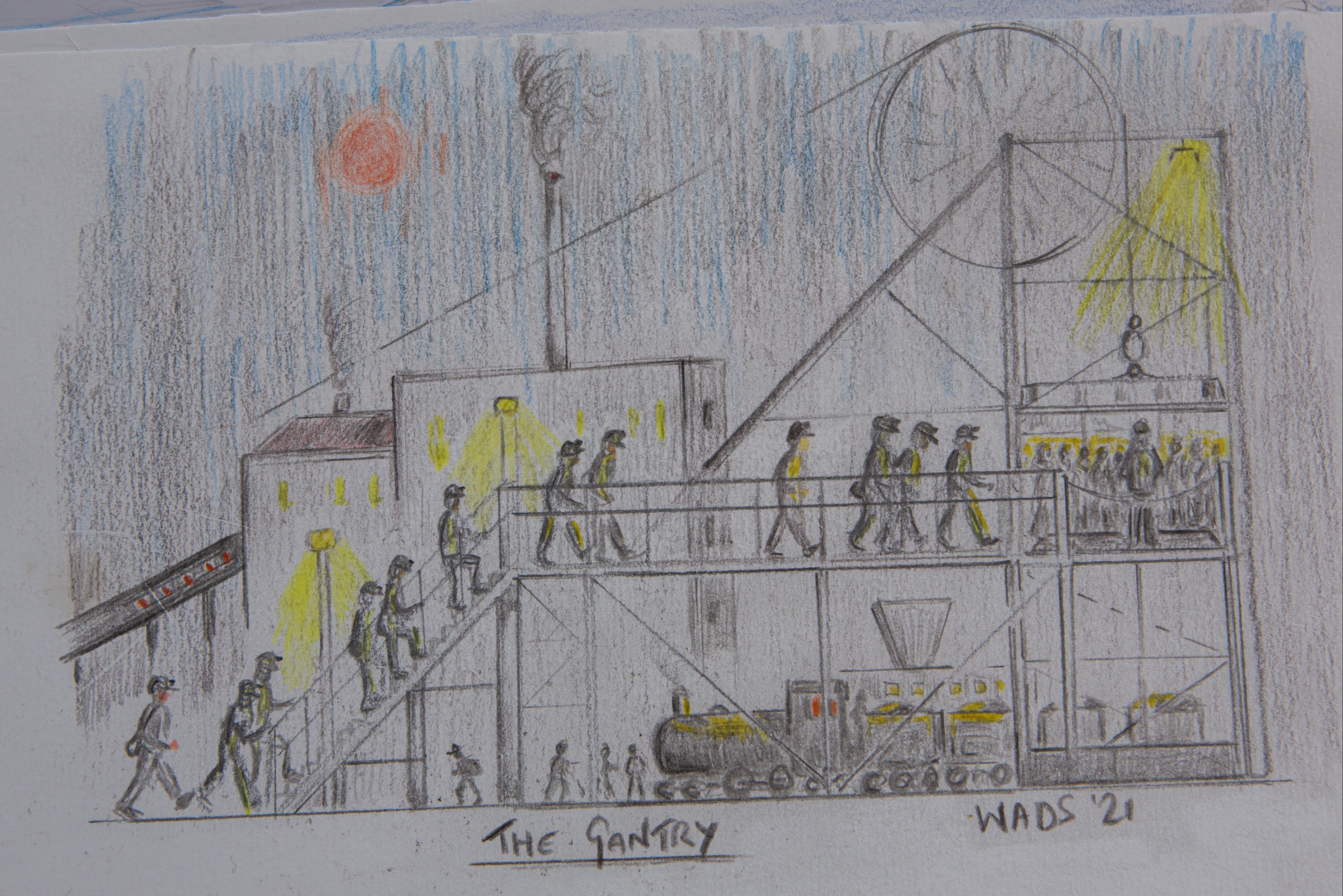 “But because of the lockdown, we had to postpone it a year.

“I drew a lot as a kid and would paint avidly as I was growing up.

“I was brought up in a pit village in Yorkshire called Dodworth, near Barnsley.

“My dad was a collier and I started my working career down the pit, so that part of my life was important. It was a big grounding.

“I drew whatever was around me then — whether it be football or local scenes.

“And then, during lockdown, I started again, dabbling in sketches and watercolour.

“I’ve done quite a few football grounds but through the lens of a few years ago.

“I researched all the grounds that I’ve drawn and acquired old images to get the architecture as accurate as I can.

“Then everything else is from my weird and strange imagination.”

But football has always been his big passion and he wanted to do something in memory of former Carlisle midfielder Tony Hopper, who died of motor neurone disease aged just 42. 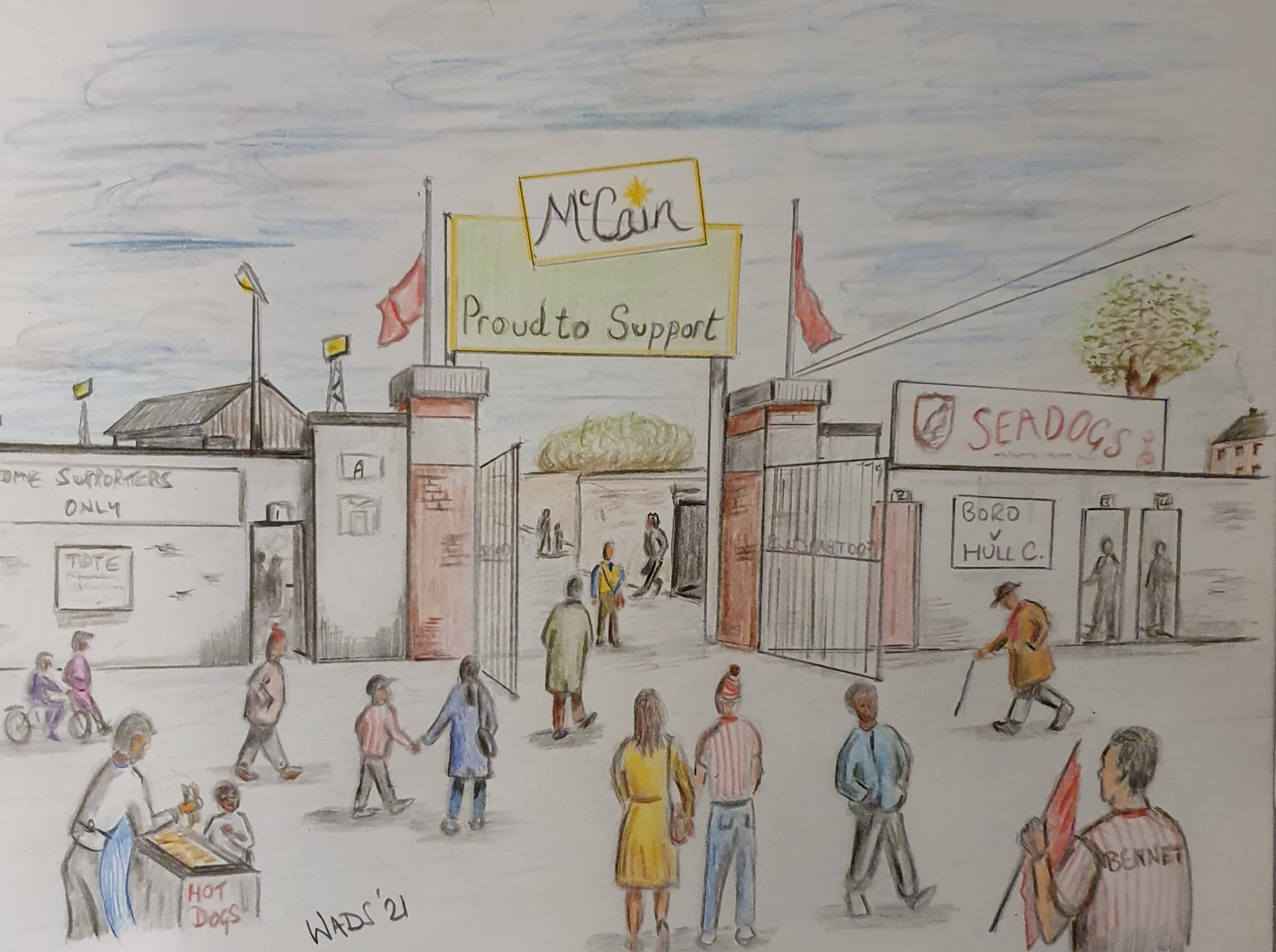 He said: “I gave Tony his debut when I was manager and he sadly passed away three years ago. Tony was looked after by the Eden Valley Hospice, who have been struggling because of the pandemic, so we’ve decided to raise funds for them.

“Not only do we want to mark what we achieved at Carlisle all those years ago but to also remember Tony and our physio Peter Hampton, who passed away last September.

“It was an incredible time for the club. In my two seasons at the club, they reached the play-off semi-final, which we lost to Wycombe; won the title to get promoted and made Wembley for the first time in Carlisle’s history for the EFL Trophy final against Birmingham. There were 76,663 fans there that day!

“I gave the likes of Rory Delap and Paul Murray their senior debuts at Carlisle.”

The Cumbrians will always have a special place in Wadsworth’s heart as they were the first club to make him a professional football manager in 1993. And he admits his regret at resigning a few months after their 1995 triumph.

He said: “Carlisle — and later Newcastle — are the two clubs where I look back and reflect that I shouldn’t have left when I did.

“I should’ve stuck around but was stupid. That’s life, though, isn’t it?

“In the Carlisle case, we had just got promoted to the third tier and didn’t invest so it became difficult and frustrating.

"Norwich came in and made a good offer to go as assistant manager to Gary Megson.

“It was a big mistake because after just a couple of months they declared they were bust. What a great move that was!

“I went into work one day and they said, ‘Can you hand your car back in? Oh, and by the way, we’ve sold your flat!’”

Wadsworth will always cherish his memories of working with Robson for England and Newcastle. 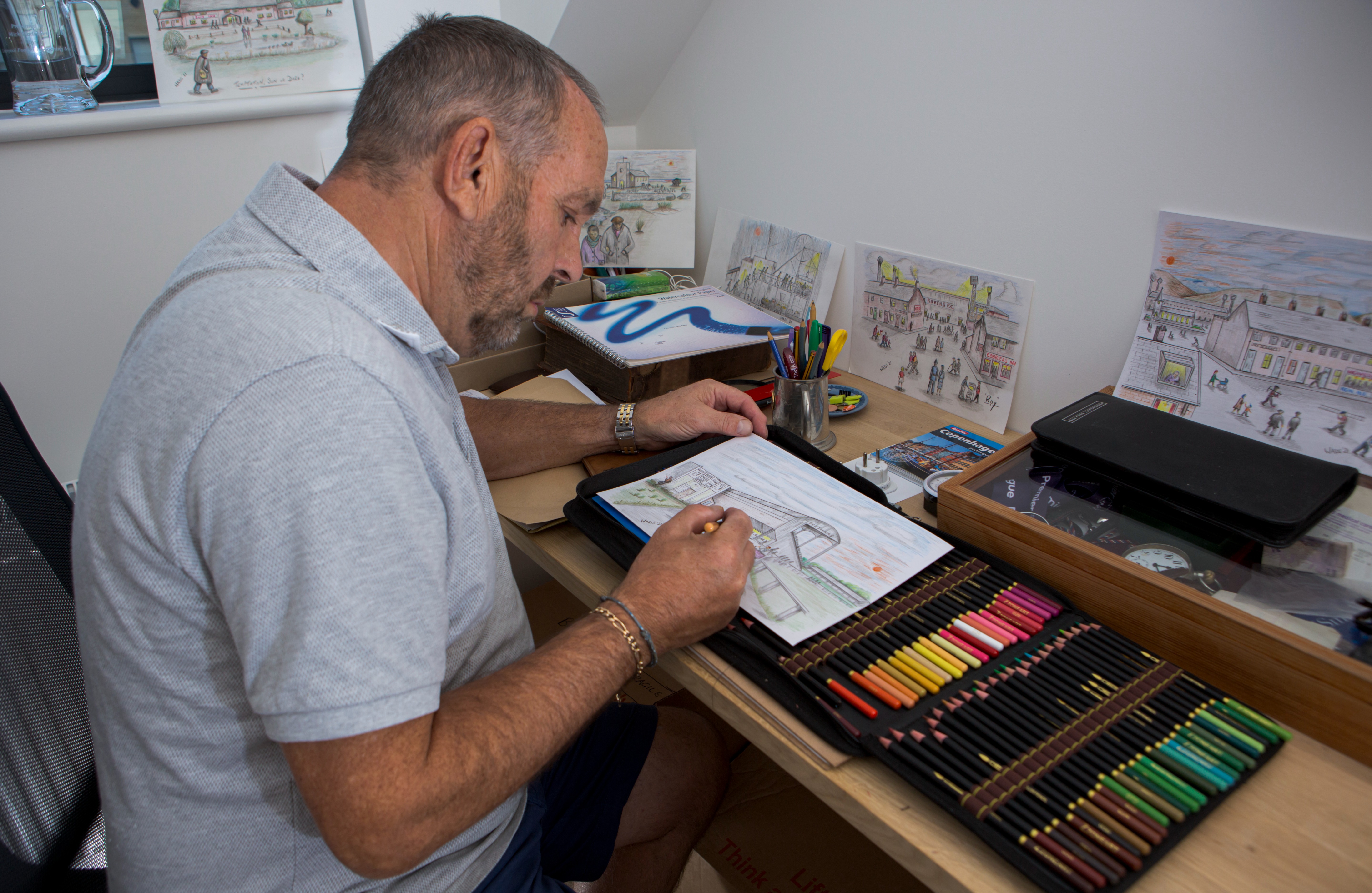 He worked as an FA regional coach in the north west and it was while there that he met Robson. And the former Three Lions boss took him to Italy to be part of his coaching team for the World Cup in 1990.

Robson later recruited him as his assistant at Newcastle and Wadsworth said: “Bobby knew what I was good at.

“He really leaned on me to head up the coaching at Newcastle so training on a daily basis was my responsibility, along with the coaching team as it were.

“John Carver was there then and Tommy Craig was doing the reserves.

“It wasn’t a dictatorial situation under Bobby.

“I got on with what I enjoyed most, which was being on the training ground.

“Bobby was fantastic and always very thoughtful in everything we did.

“He was a wonderful person — a true gentleman but also as hard as old boots.”

Wadsworth is working with Sheffield Star chief football writer James Shield on a book charting his life and memories, which will most probably be published at some point next year.

And renowned football photographer Stuart Roy Clarke is also hoping to use some of Wadsworth’s drawings in a book and at an exhibition of his work in Carlisle soon.

BETTING SPECIAL: GET 30/1 ON FURY OR 50/1 ON WILDER FOR HEAVYWEIGHT BOXING CLASH

Wadsworth added: “I’ve been so blessed to have had such a great career in football.

“I only played 20-odd games myself for Scunthorpe in the Football League, with the rest of my playing days in non-league.

“So I was fortunate to have a successful career in the professional game.”