The N.F.L. got through all 256 games, no matter how tenuous, completing the regular season. Now, an expanded field of 14 teams enters the playoffs with a chance at qualifying for Super Bowl LV, which is scheduled to be held on Feb. 7 in Tampa, Fla. The format, conceived to balance out the pandemic-related issues of the season, resulted in six games slotted this weekend, rather than the usual four. It also left only two teams with first-round byes, which was terrible news for the Buffalo Bills and the New Orleans Saints, both of whom would have been able to sit out this round in a typical season.

Here is a look at the wild-card round. Unlike in the regular season, these picks are not made against the spread. 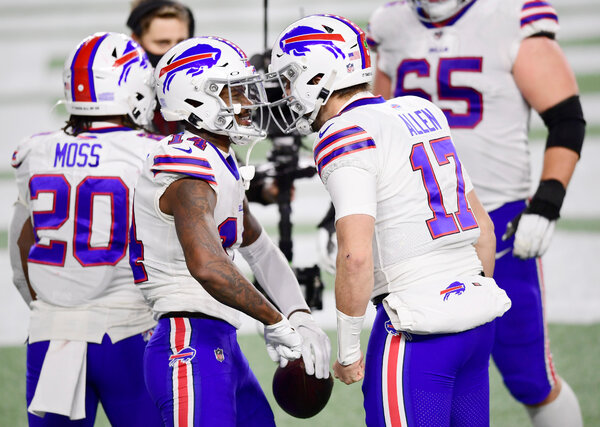 One of these teams finished in the N.F.L.’s top 10 in offense and defense, and it wasn’t the Bills (13-3). The Colts (11-5) were wildly inconsistent, barely qualified for the playoffs (Buffalo’s blowout win over Miami in Week 17 helped considerably) and had a bad habit of wearing down as games went along. Despite that, they finished with the statistics of a solid contender and the franchise’s best record since 2014.

That could fall apart quickly against Buffalo.

The Bills’ success starts with quarterback Josh Allen, who progressed from a mistake-prone gunslinger to a legitimate candidate for the Most Valuable Player Award, leading Buffalo to its first division title since 1995. A fair amount of that improvement should be attributed to the arrival of wide receiver Stefon Diggs, whose presence opened the field for Cole Beasley and John Brown. Buffalo finished second in the N.F.L. in scoring, and closed the season with a six-game win streak in which the team averaged 38.2 points a game.

The Bills’ defense didn’t rank nearly as high statistically, but cornerback Tre’Davious White and linebacker Tremaine Edmunds led a unit that tied for the third-most takeaways in the N.F.L. After a rocky start to the year, Buffalo’s defense was particularly impressive in late-season wins over the Chargers and the Steelers.

The biggest factor in this game will probably be the weather. It is expected to be around 30 degrees in Orchard Park, N.Y., on Saturday afternoon, and Indianapolis’s quarterback, Philip Rivers, hasn’t won with a kickoff temperature below 35 degrees since Week 12 of the 2013 season. A creaky 39-year-old quarterback who has spent nearly his entire career playing in warm weather or domes is not a recipe for January success in western New York. Pick: Bills

That we are discussing whether quarterback Jared Goff can play is a testament to medical advances or his toughness, or both. Goff had surgery on the thumb of his throwing hand on Dec. 28 — that would allow for only 11 days of recovery and rehabilitation. Coach Sean McVay has said Goff is throwing in practice and “preparing himself to play,” but should he be ruled out, the Rams (10-6) would turn again to John Wolford, the pride and joy of the Alliance of American Football and the surprise winner of his first N.F.L. start, which came in Week 17.

Be it Wolford or a limited version of Goff, the Rams should be underdogs against the Seahawks (12-4). Seattle’s offense was never in question — Russell Wilson is a threat to throw a touchdown pass to Tyler Lockett or D.K. Metcalf on almost every play — but after a brutal start to the season, the Seahawks’ defense improved considerably. The only solace for Los Angeles is that Seattle may be without safety Jamal Adams and defensive tackle Jarran Reed, which would significantly weaken the Seahawks’ pass rush.

At full strength, this would probably have been a terrific game between N.F.C. West heavyweights. And you can’t count out the Rams as long as defensive tackle Aaron Donald — one of the best players in the N.F.L. at any position — is around. But when taken in its diminished form, this game tilts in Seattle’s direction. Pick: Seahawks

Winning your division is important. The Footballers (7-9) have the worst record of any playoff team — they tied the 2010 Seattle Seahawks for the worst record for a playoff team in N.F.L. history — but they get to host a game against the Buccaneers (11-5) by way of Tampa Bay’s being a wild-card entrant. It may seem unfair, but it wasn’t Washington’s fault that the Buccaneers lost both of their games against division rival New Orleans (by a combined score of 72-26).

Home field advantage shouldn’t be ignored, and Washington’s defense should give it a bright future, but Tampa Bay is expected to win easily. Tom Brady and the Bucs’ offense got into a groove, ending the season with a four-game streak in which they averaged 37 points a game. And Tampa Bay’s defense, which specializes in getting to the quarterback, should have a field day thanks to the limited mobility of Alex Smith, who is not 100 percent after a calf injury to the same leg that nearly ended his career.

If there is a path to victory for the Footballers it would start with turnovers caused by Chase Young and Washington’s upstart defense. Young, a rookie defensive end, appears to have skipped right from promising player to superstar. His day for playoff success will most likely come, but not this week. Pick: Buccaneers

Only two road teams are favored this weekend, and while Tampa Bay got that distinction thanks to Washington’s ineptitude, the Ravens (11-5) got there by looking nearly unbeatable over the season’s final five weeks.

Somewhat written off after a midseason lull, Baltimore took advantage of a soft schedule to get things right, winning five consecutive games with an aggregate score of 186-89. The formula was familiar, with the Ravens rushing for more than 230 yards in four of the five games, but it was clear that a fire had been set under quarterback Lamar Jackson, who largely recaptured the form that made him the N.F.L.’s most valuable player in 2019.

Tennessee’s offense is just as intimidating thanks to a formula not all that different from Baltimore’s. Running back Derrick Henry is a nearly unstoppable force — he became just the eighth N.F.L. player to rush for 2,000 yards in a season — and quarterback Ryan Tannehill makes teams pay for stacking the box with deep strikes to wide receiver A.J. Brown.

The Titans (11-5) are nowhere near as capable as Baltimore on defense, but making them underdogs at home ignores the fact that the Ravens haven’t had anything resembling a dominant win over a good team since Week 9. It is possible Baltimore would have had similar late-season success against any opponent, but running up the score against teams like Jacksonville and Cincinnati isn’t enough to support such a bold pick. Pick: Titans

The most interesting part of this game is that Nickelodeon will be doing a broadcast of it for children. There will be animated graphics, guest reporters, filters on the screen and, of course, slime.

They couldn’t have picked a better game in which to inject some distraction, as the Bears (8-8) have little business being in the playoffs, let alone playing the Saints (12-4), who were among the N.F.L.’s five best teams this season.

Chicago started the season with a 5-1 record, then looked so bad in a six-game losing streak that Coach Matt Nagy’s job appeared to be on the line, and then surprised everyone with three wins to get back in the playoff race. On the season’s final day, the Bears were blown out by Green Bay, but backed into the playoffs because of Arizona’s loss to the Rams.

It is hard to imagine quarterback Mitchell Trubisky of the Bears winning a playoff game, but the Saints, who can dominate on both sides of the ball, have repeatedly reminded us that absolutely anything can happen in the playoffs. The Vikings shocked New Orleans in the divisional round of the 2017 season with a Stefon Diggs touchdown catch that will live forever. The Rams got away with an undeserved win in the N.F.C. championship game of the 2018 season thanks to one of the most brutal cases of uncalled pass interference you’ll find. And Minnesota ruined the Saints’ season yet again last year, with Kirk Cousins marching his team 75 yards on nine plays in overtime, throwing a walk-off touchdown pass to Kyle Rudolph before Drew Brees could even touch the ball. Pick: Saints

Only 11 teams in the 16-game era have started a season 11-0, and none of the others finished with a record as bad as this season’s Steelers (12-4), who were 1-4 down the stretch. Several factors contributed to Pittsburgh’s collapse, including the team having played the season without a real bye week, injuries to crucial defenders and the decision to rest quarterback Ben Roethlisberger and multiple defensive starters in Week 17. But it is also worth wondering if the Steelers were never as good as their franchise-best start suggested.

This is a rematch of the teams’ game in Week 17, which the Browns (11-5) won, 24-22. But the close result had to be disturbing for Cleveland given Mason Rudolph’s starting for Pittsburgh in place of Roethlisberger. Cleveland’s defensive struggles can largely be attributed to three of the team’s four starting defensive backs being out because of coronavirus protocols, but the game was still far more competitive than it should have been.

Pittsburgh will have players like T.J. Watt, Cameron Heyward and Roethlisberger back this weekend, and while the Browns should get their secondary restored, they will be weakened considerably by having their head coach, Kevin Stefanski, out after he tested positive for the coronavirus. Defensive end Olivier Vernon will be out as well after sustaining a season-ending injury in last week’s win. Of all the games this weekend, this one seems to be the most unpredictable one, but a narrow Pittsburgh victory is the most likely outcome. Pick: Steelers.

All times are Eastern.