TORONTO — The N.H.L. won’t start playing again until mid-January, but online hockey forums have been in midseason form for a while. And for some fans, the addition of video has made these chats an especially welcome diversion during the coronavirus pandemic.

In the past, a celebrity banquet or a card show provided the best means for fans to connect with sports heroes from the past. One of the most ambitious programs filling that void now is the “Lora Evans and Paul Patskou Zoomcast,” which is broadcast from Toronto every Thursday at 7 p.m. Eastern.

The chat has put viewers face to face in conversation with the likes of the Hall of Fame Coach Scotty Bowman and the former Rangers Coach Mike Keenan.

Evans, a professional photographer who specializes in hockey and the entertainment world, will fire up her computer and, one by one, admit up to 100 guests from various countries, including Sweden, Finland, the Czech Republic, the United States and Canada.

She works from a list of sports personalities and hockey fans assembled by Patskou, a writer, sports researcher and video archivist, who sends out invitations on Facebook or via email.

Moderated by Kevin Shea, an author who works at the Hockey Hall of Fame, the two-hour show consists primarily of conversations among the hosts and notable figures from the hockey world, the guests remaining muted until near the end.

One episode honored the 1994 Stanley Cup champion Rangers and reunited Keenan with the ex-Rangers Glenn Healy and Nick Kypreos, who recalled that season, which ended a 54-year title drought. 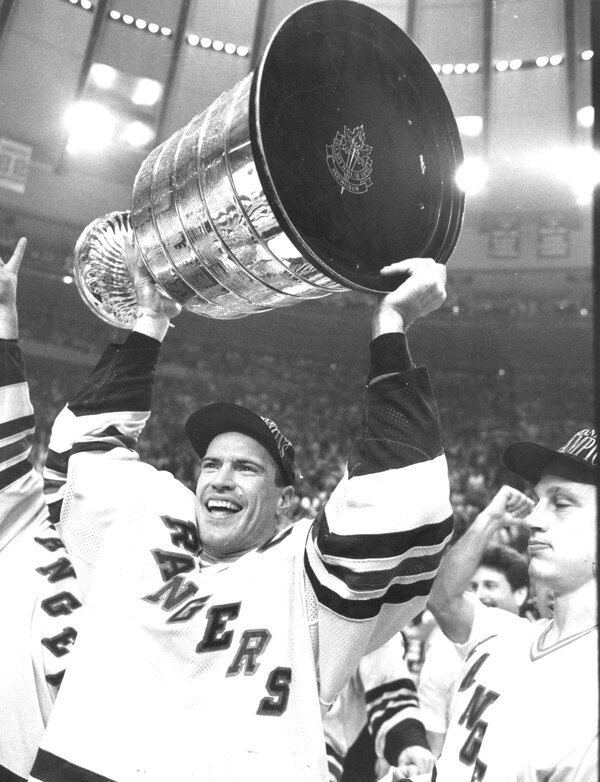 The interactive nature of the chat gave Healy, 58, an opening.

“Can I ask Mike a question that I’ve never asked before?”

Healy wanted to know how Keenan, 71, came up with the idea of showing the Rangers footage of the 1969 Miracle Mets and their parade down Broadway at the beginning of the 1993-94 N.H.L. season.

“Well,” Keenan replied, “I think visualization is a very important part of building confidence and seeing yourself successful.”

“The next best thing,” he added, “was to show the excitement that could be generated in one of the greatest cities in the world.

“And I can remember Mess got teary-eyed,” Keenan continued, referring to Mark Messier, the star center. “He got teary-eyed often. But at the first meeting, he said it was so important to him to have someone come in and say that it’s our objective to win the Stanley Cup. He didn’t want to have someone come in and say, ‘Let’s make the playoffs.’ He wanted it set in stone right from the beginning.”

The hosts will tackle tough subjects like concussions, but harmless anecdotes, not headline-grabbing material, are the show’s staple. The former Boston Bruins coach and broadcaster Don Cherry, 86, for instance, came on recently with one condition: He would not discuss his firing last year from “Hockey Night in Canada.”

One of Patskou’s favorite topics was the “Night of Infamy,” the 1969 playoff melee in Boston that culminated in Forbes Kennedy, the Maple Leafs tough guy, trading punches with Bruins goalkeeper Gerry Cheevers and then decking linesman George Ashley.

That Zoomcast episode, which showcased a discussion of the game by Kennedy, 85, and one of the linesmen, Matt Pavelich, 86, revealed that time had not rounded off the edges of the personalities involved.

Kennedy brought a feisty swagger, recalling that the fireworks were touched off by a Pat Quinn hit on Bobby Orr, who was knocked unconscious.

“Those were ordinary games in those days,” Pavelich, a Hall of Famer, said later. “Now it’s one fight in 10 games. We used to have 10 fights in one game.”

To those watching, the show was as fascinating as stumbling upon an archaeological dig.

“We’re not doing the normal thing like, ‘who’s going to win the Stanley Cup’ because that’s not interesting,” Patskou said. “We get stars. And they’re telling inside stuff, stories that most people haven’t heard of.”

Patskou and Evans turned to video chats after the Original Six Alumni Lunch program in Toronto, a gathering of old-time players that began in the 1970s, was shut down because of the pandemic.

Evans presented the idea to Patskou. They tried a Zoom gathering with just their friends, she said, “and then Paul just took off with it.”

The show’s spectators are unmuted for the “After Party,” a free-for-all that allows them to mingle with one another and the panelists. Robert Ecker, 60, who logs on almost every week from a suburb of Portland, Ore., particularly appreciates that portion of the program.

“The bonus of this is that people like me who live in Oregon get to be connected to these great hockey players like Reggie Leach and great coaches like Scotty Bowman,” Ecker said in a telephone interview. “I got to talk with them, and how awesome that was.”

Bowman, 87, is a regular guest, dropping names from 50 years ago and trading stories with some of his former players, like Yvan Cournoyer, 77, who was the Montreal Canadiens captain when they owned the Stanley Cup in the late 1970s.

Tracy Wilson of Chapel Hill, N.C., whose father, Johnny, played on four Stanley Cup championship teams with the Detroit Red Wings in the 1950s, joins in almost every week because the episodes are “open and honest,” she said in a telephone interview.

Wilson found it moving to hear from former trainers and equipment managers who talked passionately about Joey Moss, the beloved longtime locker-room attendant of the Edmonton Oilers who was born with Down syndrome. Moss died in October at 57.

Wilson said a camaraderie had developed among some regular audience members.

“There’s one member in the Zoom who has been battling cancer,” Wilson said. “So there are often exchanges I’ve had with him, ‘I hope you’re doing well.’ We’ve got to know one another that way as well.”

Across sports, organizations and teams are using teleconferences to connect with fans. Since July, the Mets have organized video calls with former players like Darryl Strawberry and John Franco, plus residents of assisted-living homes, many of whom have been sequestered in their facilities since March.

At the Island Assisted Living facility in Hempstead, N.Y., residents have been allowed visitors for only one two-week stretch during the pandemic, and nearly all entertainment and activities were canceled. A Q. and A. session with Art Shamsky of the 1969 Miracle Mets last month apparently helped morale.

“It meant so much to us,” said Robert Bamberger, 60, a resident of the facility and a lifelong Mets fan. “It’s not every day you get to talk to a Mets player. It brought a little life for all of us around here.”

Among the other organizations doing video chats during the pandemic is Hockey Ministries International, a charity in the United States and Canada that is run by a former hockey player, Don Liesemer, and that, among other things, organizes chapel services for an array of teams. The organization’s chat sessions have featured ex-players like Garry Unger, Chico Resch and Mark Osborne.

“It’s a little more personal than just talking to someone on the phone,” said Unger, 73. “It also shows you people who have been through some struggles and have come out the other side.”

Glenn Dreyfuss, the editor of Evans and Patskou’s show, suggests that these programs are “oral histories” that should be preserved for future generations. There are plans to post them on YouTube.

The creators have talked about partnering with the Hockey Hall of Fame, but they don’t want to give up too much control.

“I think the way we’ve got it is pretty ideal,” said Shea, whose contributions to the chats are separate from his work at the Hall of Fame. “To have somebody else involved might change the whole grass-roots feel.”

The mission is simple: offering people a respite from isolation for a couple of hours a week.