Thomas became the first woman to officiate a Super Bowl in NFL history.  Thomas is serving as the down judge in the game, which oversees the line of scrimmage, manages the chain gang, rules on sideline plays, counts offensive players and reminds the head referee of the current down.

The head referee is Carl Cheffers, the umpire is Fred Bryan, the line judge is Rusty Barnes, the side judge is Eugene Hall and the back judge is Dino Paganelli.

The NFL confirmed last month that Thomas will be working the Super Bowl.

“Sarah Thomas has made history again as the first female Super Bowl official,” said Troy Vincent, Sr., the NFL’s executive vice resident of football operations. “Her elite performance and commitment to excellence has earned her the right to officiate the Super Bowl. Congratulations to Sarah on this well-deserved honor.” 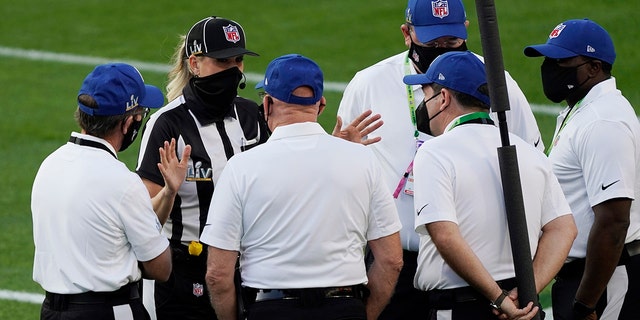 The crew has a total of 88 years of NFL experience with 77 combined playoff games.

“Their body of work over the course of a 17-game season has earned them the honor of officiating the biggest game on the world’s biggest stage,” Vincent said. “They are the best of the best.”

Fox News’ Dan Canova and the AP contributed to this report.