Elías Bendodo has the long and unwieldy job title of a man with too much on his plate. For the last three years, he has served as minister of the presidency, public administration and interior for the Spanish region of Andalusia. On the side, he acts as the local government’s spokesman, all while serving as president of the Málaga branch of the Spanish political organization Partido Popular.

He is, in other words, busy. In the last few weeks alone, Bendodo has had to organize regional elections, handle the expansion of the area’s coronavirus vaccination program and intervene in a dispute between rivals for the post of mayor in the city of Granada.

He has also spent a surprising amount of time talking about the best way to mow grass.

It started after Spain’s opening game of Euro 2020 last week against Sweden, a scoreless draw at La Cartuja, a vast, soulless and unloved stadium on the outskirts of Seville. The turf, Spain’s players and staff members said, was too short, too dry, too rough. “The field of play hurt us,” said Luis Enrique, the team’s coach.

Things had not improved by the time Spain returned to the stadium for its second game, against Poland on Saturday. “The field does not help,” said Rodri, the Manchester City midfielder. “It’s in very bad condition. It does not suit the fluidity of our game.” That match ended in a draw, too, leaving Spain needing to win its final game, against Slovakia on Wednesday, to be sure of qualification for the tournament’s knockout rounds.

By that stage, a controversy was brewing. El País reported that Spain’s coaching staff had asked the stadium’s grounds crew to cut the grass short, perhaps too short, for the Sweden game. Luis Enrique demanded the situation be remedied. In the searing heat of an Andalusian summer, the grounds crew worked overnight to make the grass grow.

It was at this point that Bendodo could not help but be drawn in. Suddenly, the most pressing issue in his bulging agenda was not the vaccination program or the lifting of the rules on wearing masks, but whether some stadium grass was a little on the short side.

“Any situation relating to the lawn that can be improved will be improved,” he vowed with the kind of purpose and sincerity traditionally reserved for a condemnation of a failing school or a crackdown on crime.

And yet even Bendodo recognized the inherent absurdity of the situation, that this subject should have gone all the way to the top, that one of the most senior politicians in one of Spain’s most populous regions should have to weigh in on the subject of a lawn.

“We would not be talking about this,” he said, “if we had scored a goal.”

That, far more than the grass at La Cartuja, is Spain’s problem, and it has been Spain’s problem for some time. It was an issue before the tournament — Luis Enrique was pressed on it after his team lost in Ukraine last year, despite registering 21 shots on goal — and it was an issue in its tuneup games before Euro 2020. The search for “the goal” has become an overpowering theme. “The goal,” Rodri said, “is everything.”

Though there have been exceptions, most notably a 6-0 win against Germany at La Cartuja in November, the pattern has been clear for some time. Spain dominates almost every game it plays. It all but monopolizes the ball. But it cannot score goals, not in any great numbers. It has, as the journalist Ladislao Molina put it, become “the king of inconsequential possession,” capable of playing 917 passes against Sweden but fashioning barely a handful of chances. Spain has created a monument to what the manager Arsène Wenger used to call “sterile domination.”

If the players have chosen to point the finger of blame downward, at the turf at La Cartuja, at least a portion of fans have identified another culprit: Álvaro Morata, Spain’s top forward. Morata was jeered by the crowd during a friendly against Portugal before the tournament, and Luis Enrique has come under intense pressure to drop him from the team.

In public, Morata has been adamant that the criticism does not affect him. Even his most illustrious predecessors, he has said, were targeted for abuse while playing for the national side. “If Fernando Torres has been criticized in Spain, imagine the intellectual level of many people,” he said in an interview with the sports daily AS.

In private, he may be more vulnerable. It was notable that after Morata struggled against Sweden, the team’s psychologist, Joaquín Valdés, sat next to him on the bench, talking intently with a player who has acknowledged in the past that he dwells on the goals that do not go in and who was once advised by his former club teammate Gianluigi Buffon not to let anyone see him cry.

He can, though, at least count on the unstinting support of his manager. A few days after the draw with Sweden, Luis Enrique declared that his team against Poland would be “Morata and 10 others.” He was rewarded by Morata’s scoring Spain’s only goal of the tournament so far; the forward celebrated by rushing to his coach, embracing him. 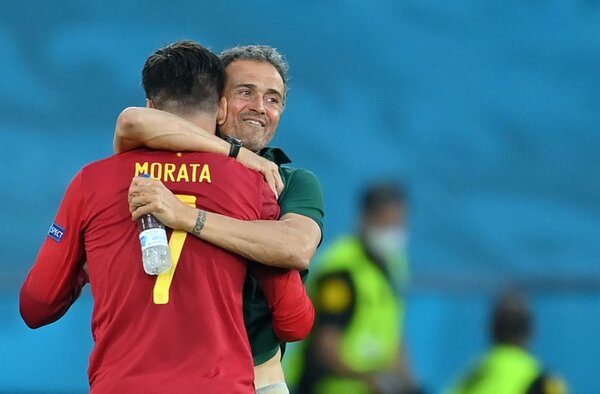 That is the message that has emanated consistently not only from Luis Enrique and his staff, but the players, too: The goals will come. After that defeat to Ukraine last October, the manager insisted that if 21 shots were not enough to score a goal, then the solution was to take more shots. Pedri, his teenage midfielder, espoused the same logic after the first game at the Euros. “We have to do the same,” he said. “If we create many opportunities, the goal will go in.”

It is that orthodoxy, though, that may well lie at the root of Spain’s problem, beyond the shortcomings of both the turf and Morata. The overwhelming majority of Luis Enrique’s squad came through the ranks at one of Spain’s elite academies, largely those of Real or Atlético Madrid and Barcelona, at a time when the country was home to arguably the greatest international team of all time.

They were all raised not only in the shadow of the Spain team that won back-to-back European Championships — as well as the country’s first World Cup — but in the style of that team, too, forged and polished into bright, inventive, technically accomplished players designed to perpetuate the same school of thought that had brought the generation before such glory.

And yet that approach is destined to fall short, to get close to the goal but never quite reach it. It was another great truism of Wenger’s that soccer was heading for a dearth of central defenders and center forwards, the positions where players needed a particular edge, one that was dulled by institutionalization.

He could have predicted no better example than Spain. The team that swept all before it might have been constructed around Xavi and Andrés Iniesta, but they had the grizzled determination of Carles Puyol at their back and the incision of David Villa and Torres in front. This team, by contrast, lacks both qualities.

In defense, that is self-inflicted — Luis Enrique elected not to call up a half-fit Sergio Ramos for the tournament — but in attack, it is endemic. If Morata seems to embody the type of forward raised by an elite academy, elegant and sophisticated but lacking ruthlessness, then his putative rivals for a place support the theory.

Gerard Moreno, the only other specialist striker in Spain’s squad, was playing third-division soccer at age 16, and did not make his debut in La Liga until he was 22. He bloomed late, winning his first cap for Spain at 27.

It is a career trajectory that is startlingly similar to quite a few of the most productive Spanish forwards of recent years: Iago Aspas, now 33, who has only ever shone at Celta Vigo; José Luis Morales, the same age, who rose from obscurity to captain of Levante in La Liga; Kike García, a little younger at 31, coming off the back of a fine personal season for relegated Eibar.

That it is these players — the ones who cut their teeth and sharpened their instincts away from the elite — who are the only viable candidates to replace Morata encapsulates the problem. Spain’s academies churn out midfielders and fullbacks with startling regularity, but they have struggled to produce the caliber of striker the national team needs if it is to scale the heights it touched a decade ago.

Spain will plow on, of course. A win against Slovakia will see it through to the knockout rounds. Another draw may yet be enough to sneak through, too. From there, Luis Enrique has sufficient talent at his disposal to run deep into the tournament. Spain will, in other words, do the same thing it has always done, the only thing it now knows how to do: pass and pass and pass again, kicking the real cause of its ills into the long grass.