SAN ANTONIO — Stanford is back in the N.C.A.A. women’s tournament title game for the first time since 2010 after sneaking past South Carolina on Friday night, 66-65, in a back-and-forth battle that came down to two missed shots by the Gamecocks on the final possession.

Haley Jones grabbed an offensive rebound and put up a running shot with 32 seconds left to give Stanford a 1-point lead. Then, as the Cardinal tried to run out the clock, Aliyah Boston stole the ball with six seconds left, starting a fast break with a clear chance to win. But Brea Beal missed a layup from the left side while running at a full sprint, and Boston missed a short follow-up chance off the back of the rim.

“It was in our hands, but we just came up short,” South Carolina guard Zia Cooke told reporters after the game. She led the Gamecocks with 25 points, including five 3-pointers that were clearly needed to counter Stanford’s aggressive 3-point attack.

At times, especially in the third quarter, Cooke went back and forth with Jones, who scored 24 points for the Cardinal. 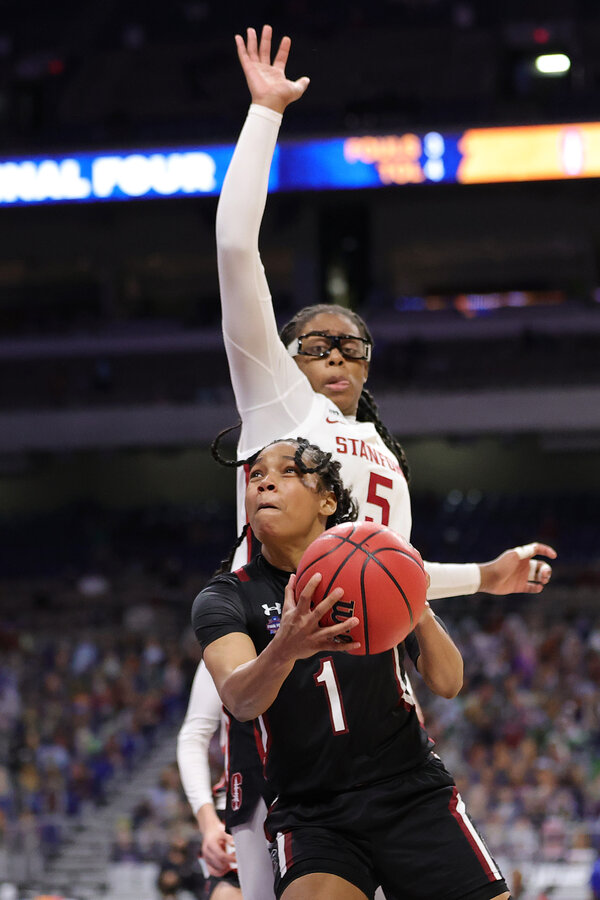 The last time the Cardinal were in the national final, they fell to UConn, 53-47, in the Alamodome. Stanford, coached by Tara VanDerveer since 1985, last won the title in 1992.

“To be able to bring us back to this national championship stage is just an honor,” Jones said. “For Tara, for the team, for the program.”

Stanford struggled at the game’s start, committing four turnovers in the first five minutes, but took the lead on a set of free throws by junior guard Lexie Hull at the beginning of the second quarter. By halftime, the Cardinal were up by 6.

As the game developed, both teams began favoring perimeter shots, with Jones and Cooke duking it out as a combination of players — including Cameron Brink and Fran Belibi — worked to keep Boston, South Carolina’s versatile star, from dominating. Boston finished with 11 points, on 5-of-14 shooting, and 16 rebounds.

The teams continued to trade baskets in the middle of the fourth quarter. Stanford maintained a 4-point lead until South Carolina’s Destanni Henderson made a second-chance 3-pointer to bring the Gamecocks within a point. Stanford senior guard Kiana Williams immediately followed up with a jumper in the paint with just over 2 minutes to go. Williams had 8 points for the Cardinal; Henderson had 18 points, 5 rebounds and 3 assists for the Gamecocks.

“We really just didn’t have an answer for Cooke or Henderson,” VanDerveer said.

With 39 seconds left, South Carolina was down by 2. Henderson landed a step-back jumper for 3 points, giving the Gamecocks their first lead since the first quarter.

But Jones quickly answered with the shot that ended up being the game-winner.

“We’ll have to play better on Sunday in order to be successful,” VanDerveer said.

Brink, who was managing an injured hamstring, spent much of the game keeping tabs on Boston and South Carolina forward Laeticia Amihere, using her 6-foot-4 frame to knock the ball away down low. Brink had six of Stanford’s 12 blocks; she also had 6 points and 4 rebounds.

Stanford has hit 56 3-pointers over the course of the tournament, breaking the record of 54 set by UConn in 2015.

The teams battled on a court that was new for the Final Four, replacing one of two courts that were used for earlier rounds in the large space that fits a football field in the Alamodome. The setup meant that the court was surrounded on three sides by fans — some cardboard cutout avatars, some human — while the fourth side had a large black curtain to separate the space from the quieter half of the stadium.

Stanford got into gear against South Carolina much earlier than it did in its matchup against Louisville in the round of 8. Cardinal sophomore forward Ashten Prechtel sparked her team in that game, a 78-63 victory, and ended up with 9 points and 8 rebounds in 24 minutes against South Carolina.

Stanford will face either top-seeded UConn or Arizona, a No. 3 seed, for the national title on Sunday. The Huskies and Wildcats were scheduled to play in the second semifinal on Friday night.

“It’s going to just come down to — Sunday — who’s getting after it, who’s most aggressive,” VanDerveer said. “We’ll have to be aggressive.”