Dean Boxall was doing Dean Boxall things on pool deck as Ariarne Titmus set off in hot pursuit of an insuperable red line that was surging up the pool with the relentless certainty of an incoming tide.

Titmus had been squabbling with the virtual mark since the start of her 400m freestyle at the Australian Swimming Championships in Adelaide. She had bested it at every turn, including the one that launched her into the final 50m, but now it was descending upon her weary shoulders.

Sensing the urgency – and when isn’t there urgency when you are trying to beat a Katie Ledecky world record? – Boxall skipped along the outside lane, waving his arms, roaring encouragement and shoving the very air, as if his motion might propel Titmus forward through the water.

When she made her glide to the wall, the numbers spoke for themselves: 3:56.40s. Titmus, already the Olympic and world champion, now owned the fastest time in history, beating Ledecky’s previously bulletproof mark by 0.06s.

It was a seismic moment in the sport, mostly because of the invulnerability of the woman who set it during her golden run at the Rio Olympic Games in 2016, where Ledecky caught lightning in a bottle to sweep the women’s distance events, two of them (440m, 800m) in world record times.

Across an eight-year stretch, Ledecky’s world standards in the 400m, 800m and 1500m had been lowered 11 times – but only by herself. So when Titmus finally breached the wall, Boxall celebrated with his customary gusto.

That’s the stereotype the sporting world has come to expect from Boxall after his wild celebrations in Tokyo made him somewhat of an internet sensation. More instructive on Sunday night was a more serene moment, an hour after the crowd had left, as he stood with Titmus at the far corner of the training pool. 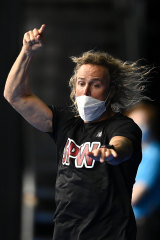 Dean Boxall cheers on on Ariarne Titmus on Sunday nightCredit:Getty

He had just addressed the rest of his St Peters squad, many of whom had been selected in the teams for the FINA World Championships and Commonwealth Games, before he and Titmus shared a long embrace. No leaping, or hollering; just a grounding moment between an athlete and coach whose partnership has taken them to levels of excellence that were, for a time, barely conceivable.

“Some people might not think my behaviour on pool deck is very humble but we are an incredibly humble team. It’s just an honour to chase a time like that. For Arnie and myself, our partnership has always been: What’s next? So let’s do it,” Boxall said.

Titmus, now 21, had spoken before the meet of her new holistic approach to the sport. She touched on those themes again after the race, saying she had never been so content in and out of the water and was racing with freedom and fearlessness of her 16-year-old self.

That’s all true but behind the scenes, Boxall and Titmus had been planning one of the great heists for more than two months. They had told barely a soul that this night was going to be a no-holds-barred assault on a famous world record that she had sailed close to twice before.

“That’s something we were going for but nobody knew. We kept it a secret. But that was for her to be motivated, to feel the nerves, to feel the pressure,” Boxall revealed.

“She was clocking magnificent times in training, being super consistent, so we made the call about eight to nine weeks out. Let’s go for it. We kept it under wraps. She executed very well.”

Every world record is an achievement but this one, like it was for Ledecky in Rio, was completed in virtual solidarity. Second-placed Lani Pallister would drop off the pace before the 200m mark, meaning Titmus had to race her internal clock and forge on through clean water.

Like it was in Tokyo, beating the Ledecky standard has on reinforced to both Titmus and Boxall how mighty the American champion has been and will be as she powers towards what might be an Olympic swansong in Paris.

“Katie is the GOAT. And Arnie breaking that record doesn’t change that,” Boxall said. “But there is definitely more to come with this girl, she hasn’t reached her peak.”

Having survived the most brutal examination world swimming can offer when she bested Ledecky twice in Tokyo, Titmus knows her place in this unfolding storyline. She’s so refreshingly humble and congenial that she spent most of her post-race interviews praising Ledecky, teasing about their rivalry moving forward and speaking of her growing desire to give back to those following in her footsteps.

When presented with her list of achievements at such a young age – Olympic gold, world titles, world records – she was asked what was left to achieve in the water over coming campaigns.

“To do it all again. It’s a lovely feeling. I’m 22 this year and I feel like I have a lot left to give to the sport,” Titmus replied.

“I feel my position as an athlete, I’m not just here to create great sporting moments. I feel like I can be relatable. Coming from a regional town (Launceston) as well, I feel like I can spread that message that it doesn’t matter who you are, you can do great things.”

As she spoke, a gaggle of young fans were peering through a glass door, hoping to catch her attention before she departed for her warm down swim. Initially, Titmus didn’t see them, but then turned to offer them a cereal box smile and an enthusiastic wave.

They all squealed and giggled in pure delight, rejoicing in another Ariarne Titmus moment that won’t be forgotten anytime soon.