AS a semblance of normality returned, they belted out their great social-distancing anthem: “Blue moon, you saw me standing alone.”

There were only 2,000 Manchester City fans inside Wembley but their great Mancunian din was music to the ears of Pep Guardiola’s. 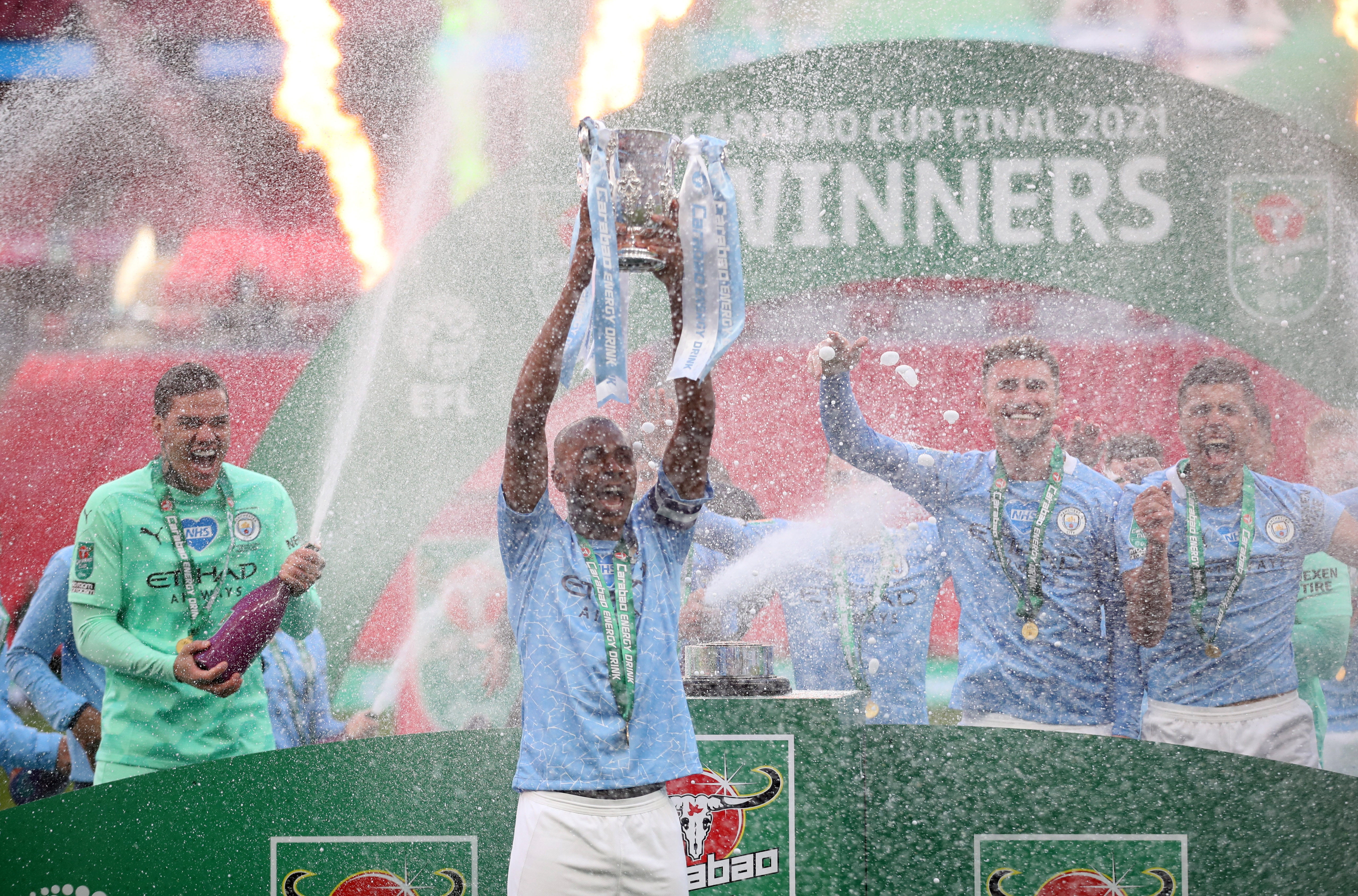 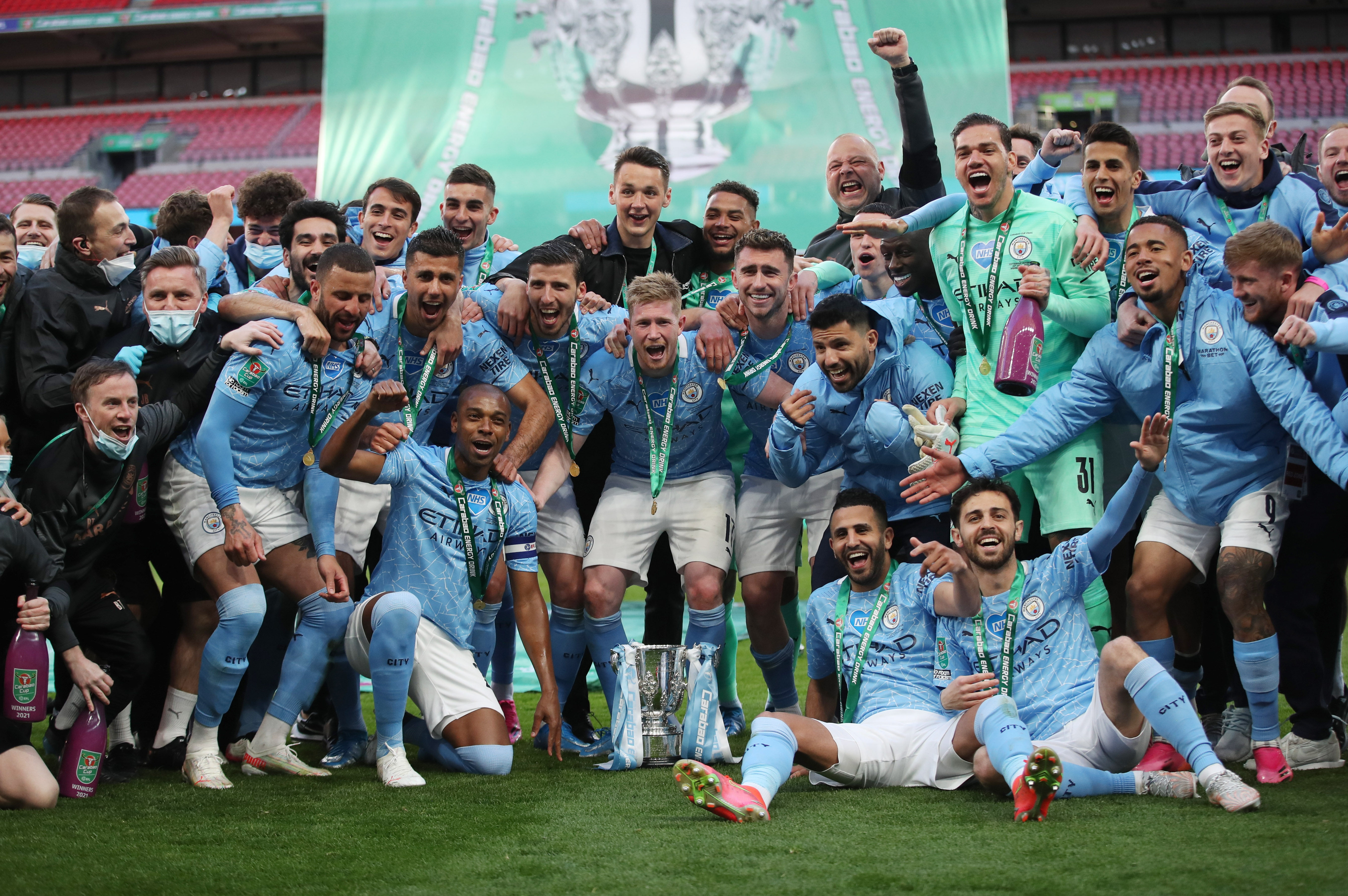 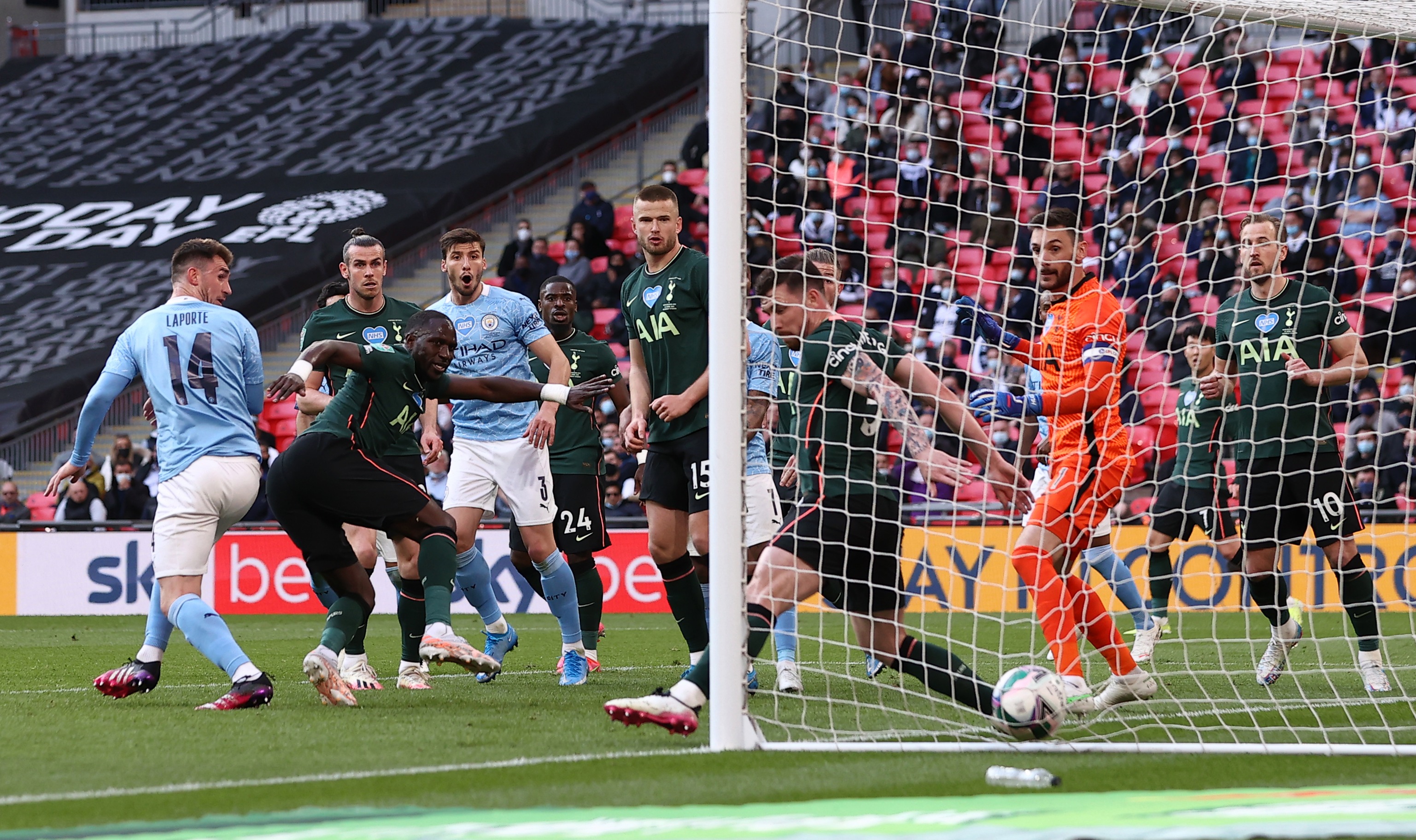 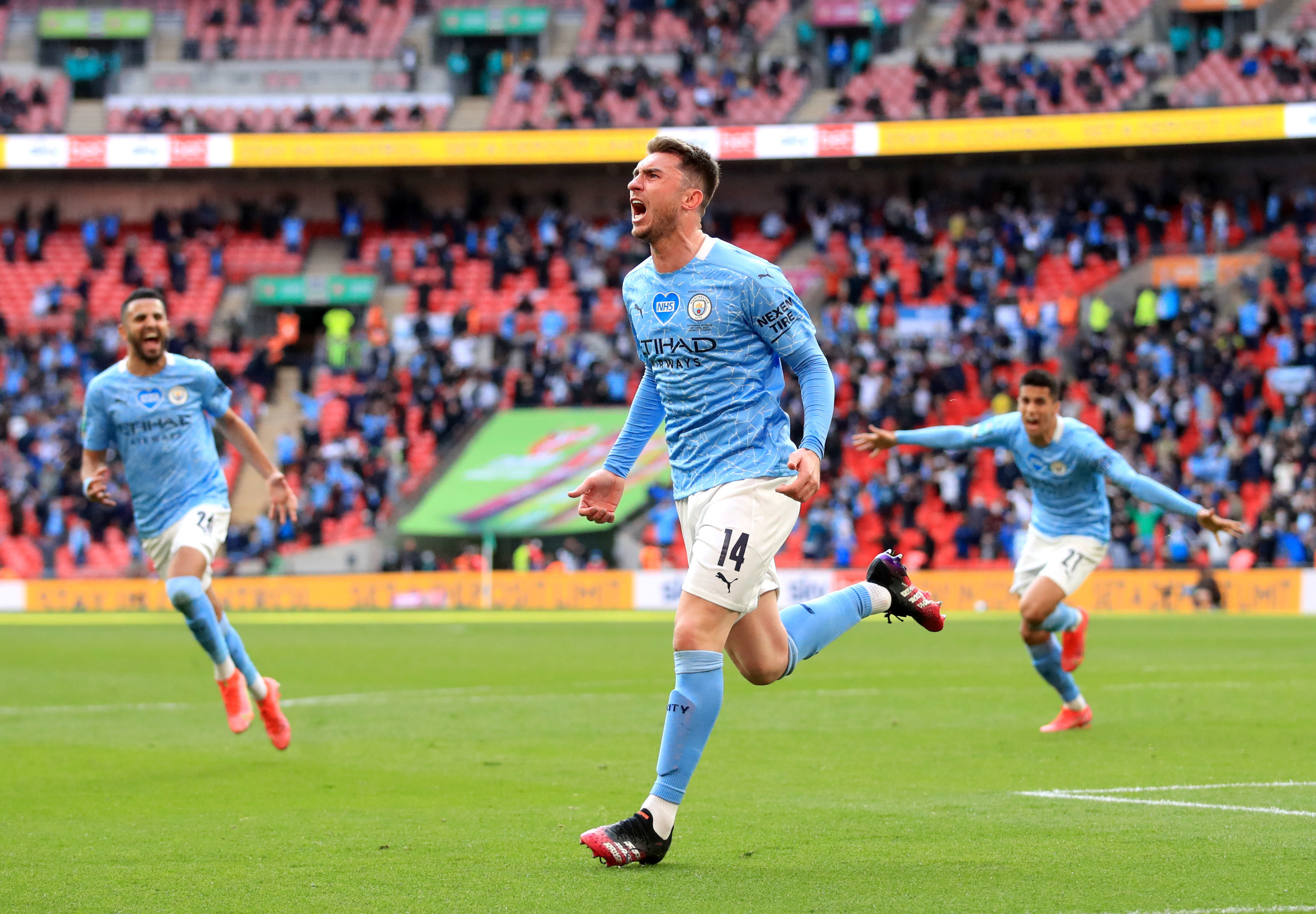 And what could be normal than City winning a trophy – their fourth straight League Cup and their seventh of the last ten trophies dished out in English domestic football.

As soon as next Sunday, City can be crowned Premier League champions that figure could read eight out of 11.

It was just a shame Etihad owners should have left an acrid stench over this final, by panicking and joining the failed Super League scheme.

The fall-out from that shabby affair marred a day which should have been a joyful celebration.

Still, City were worthy winners and after so much free-flowing football the only surprise was that they won it from a set-piece – Aymeric Laporte heading home at the back stick from a Kevin De Bruyne free-kick ten minutes from time.

So Harry Kane must wait for the first trophy of his career. Wait or leave Spurs, who are without silverware for a 13th straight season now.

Sacking Jose Mourinho made little difference as Spurs were cautious and dominated for the vast majority of this contest.

Spurs failing to turn up on a big occasion was another sign of normality as were the presence of rival fans at an English match for the first time in more than a year and severe delays on the London Underground. 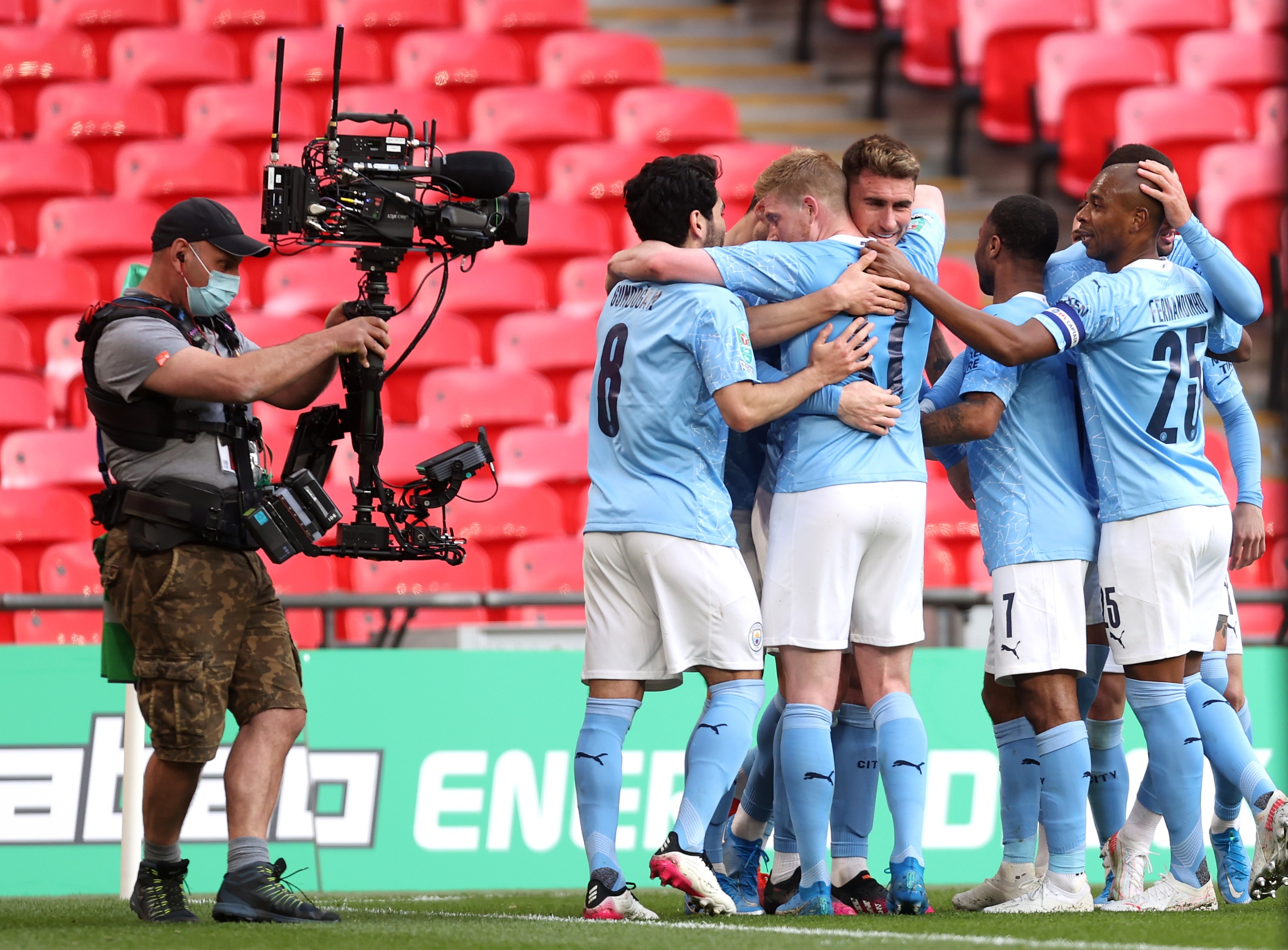 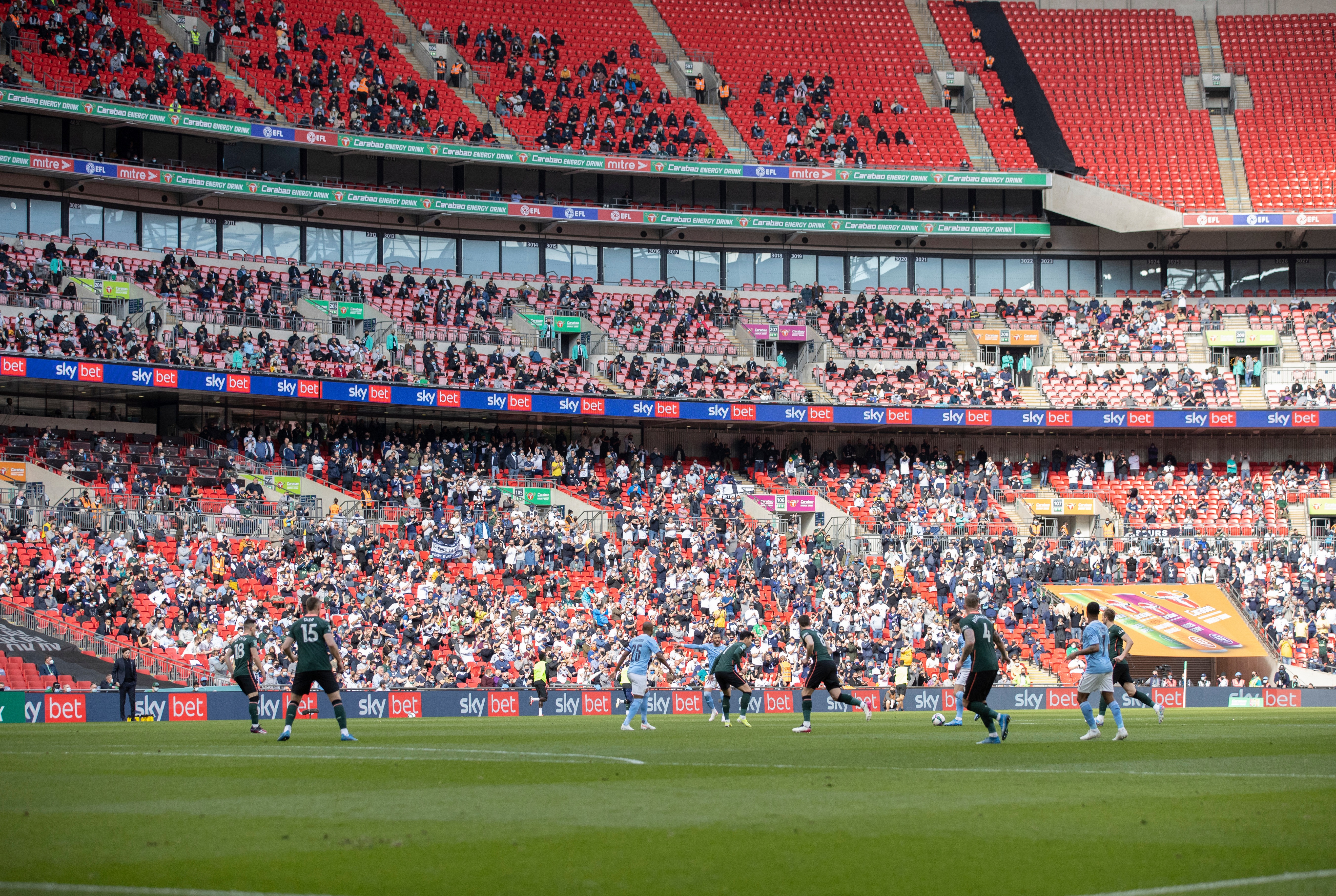 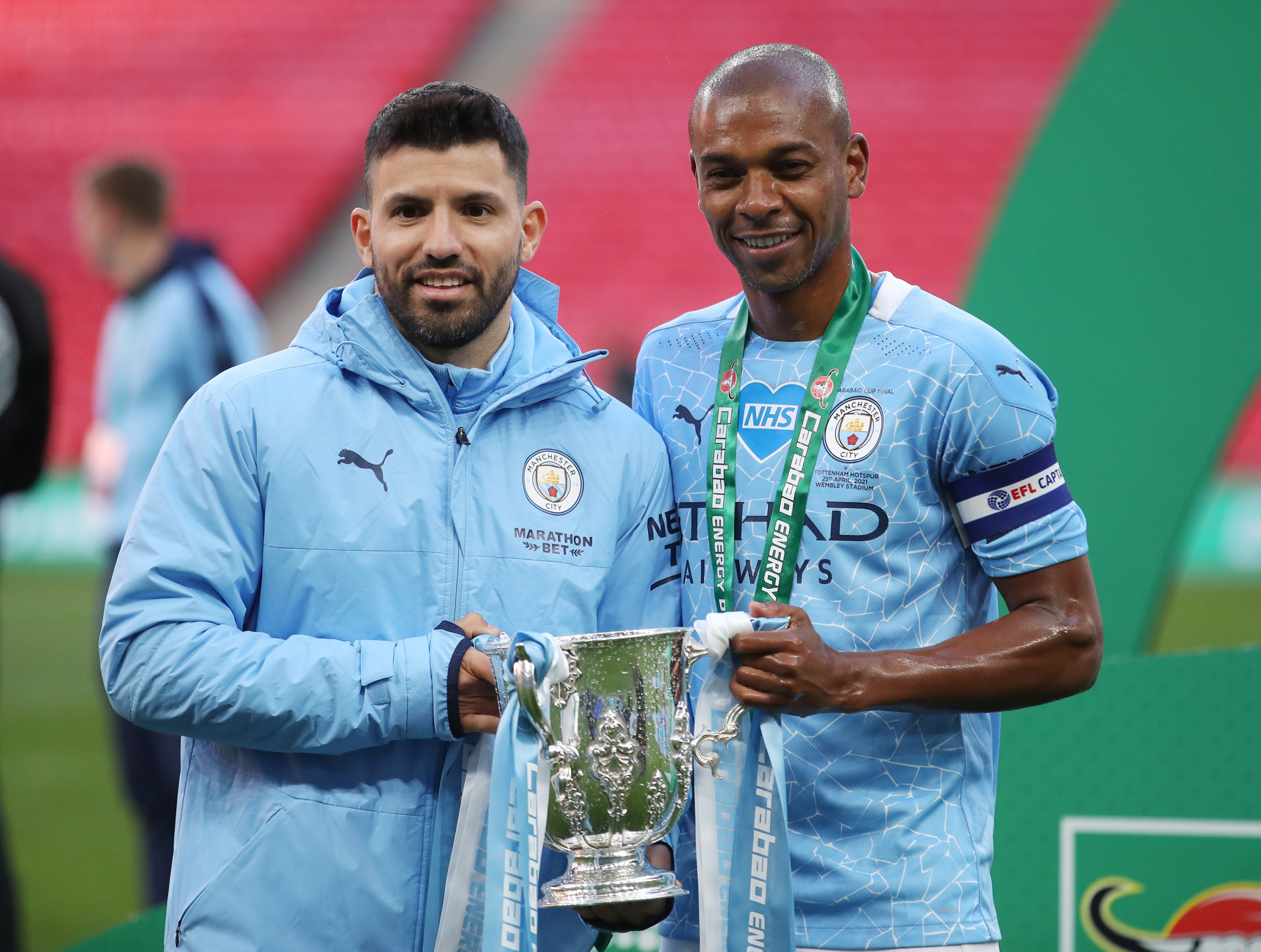 Yet travelling down Wembley Way, you would never have known that these two clubs had just been on the losing side of a civil war, as there were no organised protests.

Inside, there were a couple of dissenting City banners and some Spurs fans called for the head of chairman Daniel Levy.

But he has survived the sewage storm relatively unscathed, compared to the American owners of Arsenal, Liverpool and Manchester United.

Levy had axed Mourinho six days before this final, in only his second most newsworthy act of last week.

Still, Kane had passed himself fit – and he does tend to self-diagnose in these situations – while Gareth Bale was benched despite scoring on Mason’s maiden outing against Southampton.

But the most obvious sign that Mourinho had gone was the inclusion of Harry Winks, who’d been blackballed from major fixtures for some time.

Guardiola went with Kevin De Bruyne a ‘false nine’ – his plan A for the biggest matches of late.

Raheem Sterling, subdued of late, seemed re-charged by the crackle of a crowd, kippering Serge Aurier and cutting back for Foden to shoot wide, then heading wide himself from a Riyad Mahrez cross. 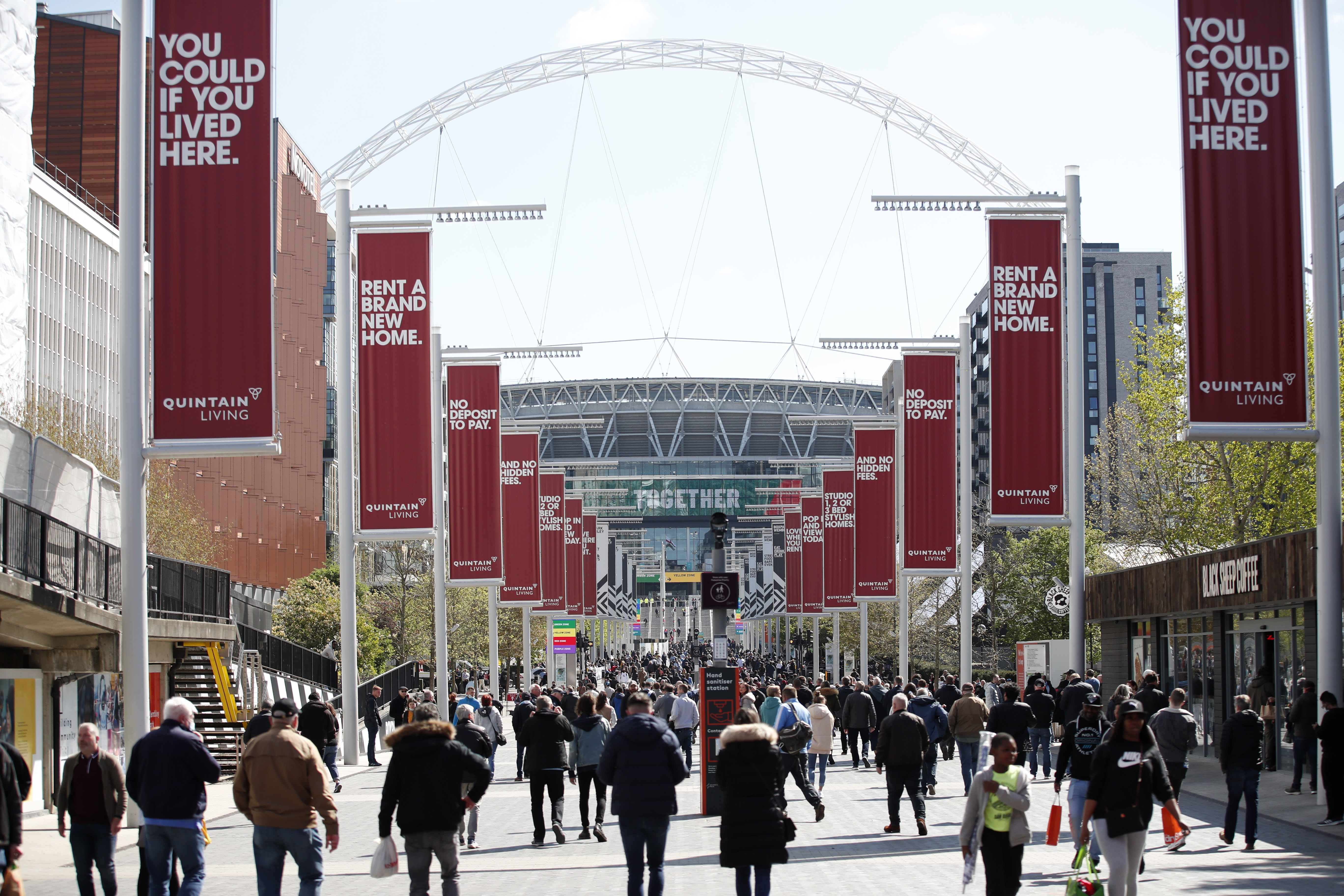 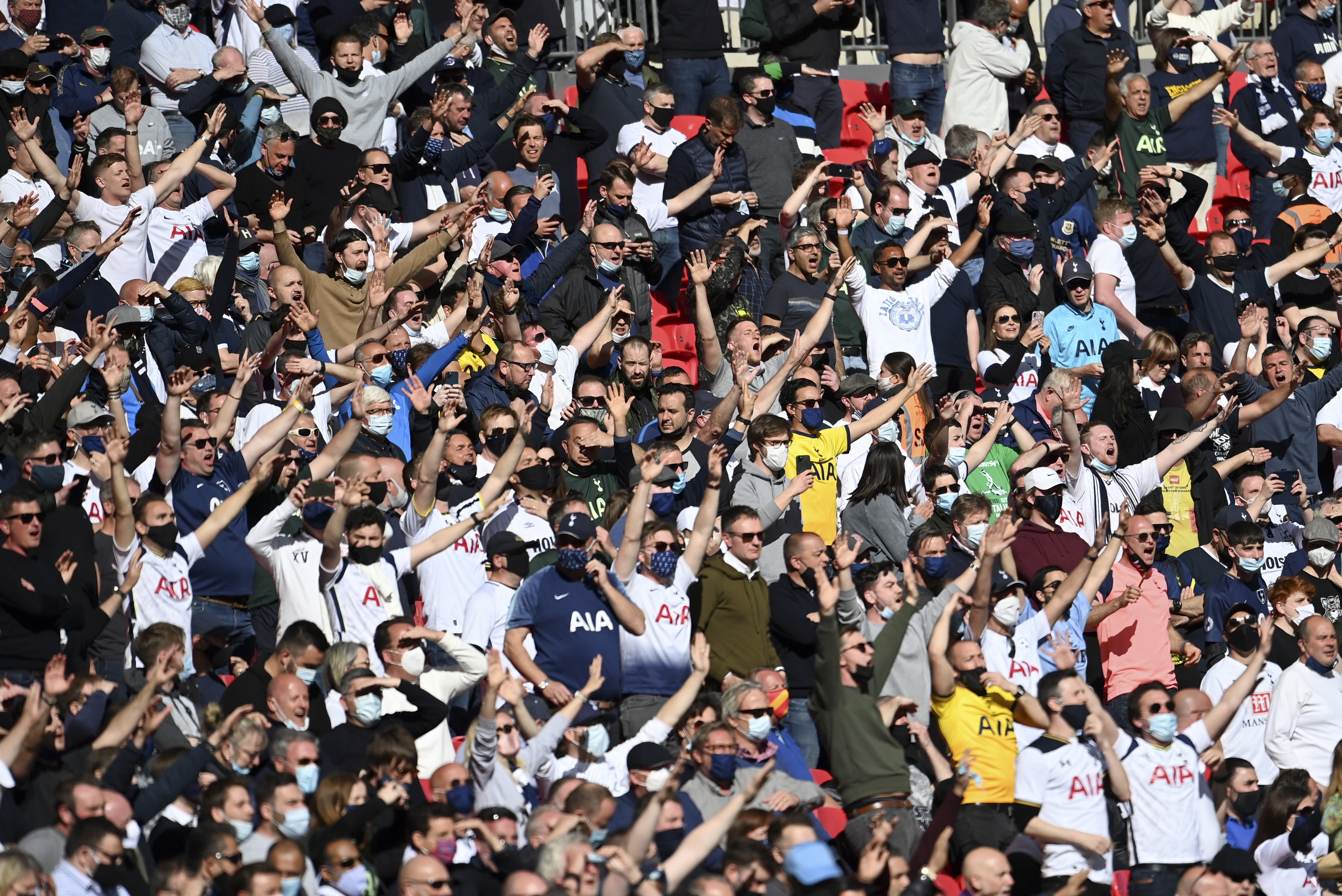 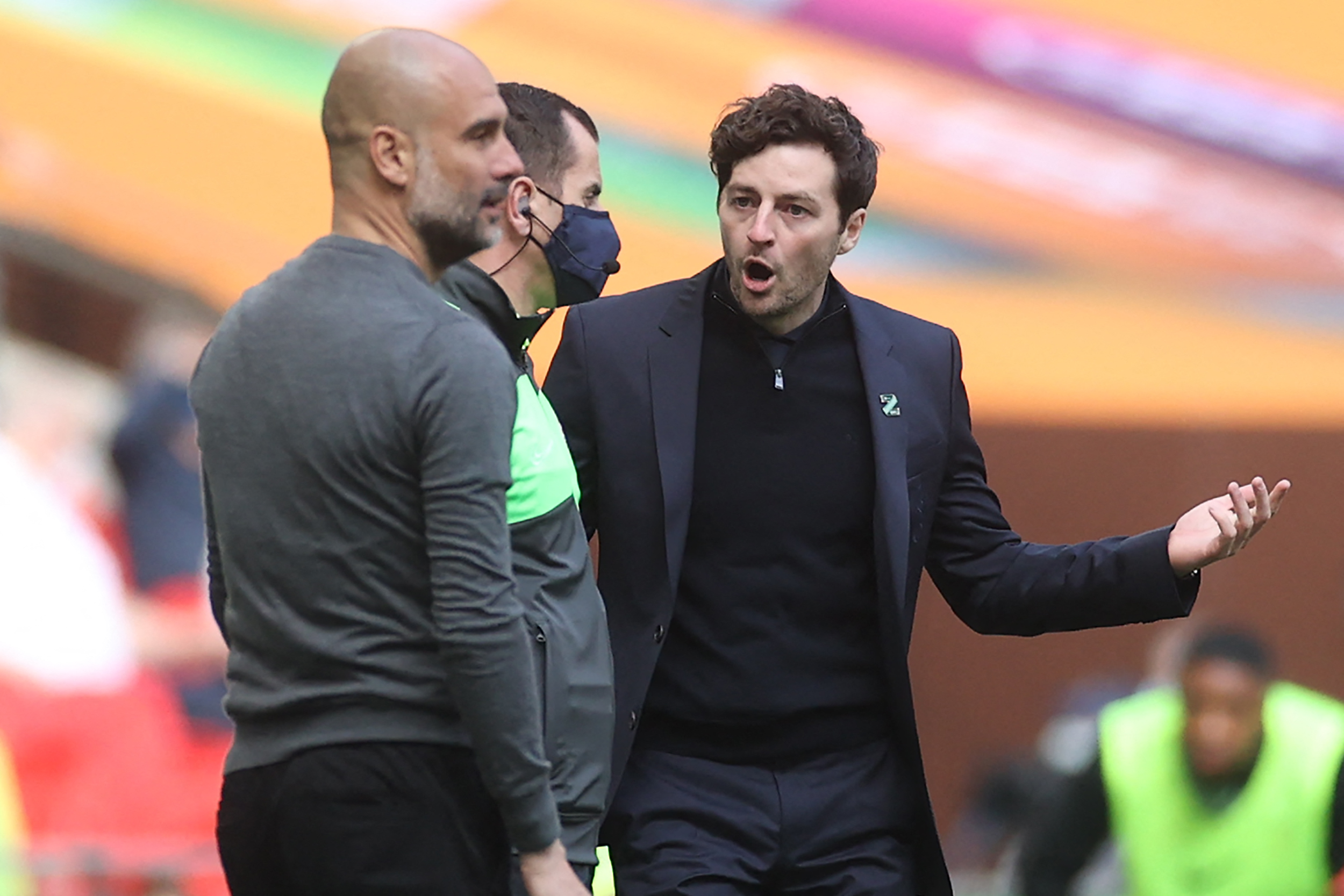 Soon, a De Bruyne cross was cut out by Alderweireld, who then denied Foden with a sliding tackle just as the youngster pulled the trigger.

Mourinho had fallen out with Alderweireld in his final weeks, which was none too clever of the Portuguese.

Then Fernandinho slipped in a pass for Sterling, who lifted his shot over Jugo Lloris but wide of the far post.

After that, a cute diagonal from Joao Cancelo picked out Mahrez, who cut inside and shot narrowly past the back stick – the Algerian then curling one over from long range.

Lloris turned a Cancelo shot round the post in first-half injury-time and we reached half-time without Spurs having really joined in – although both City centre-backs, Ruben Dias and Laporte, had been booked for halting attempted breaks.

But straight after the restart City keeper Zack Steffen was forced into an excellent sprawling stop to foil a curling Giovani Lo Celso effort.

There was plenty more intent from Spurs now – Kane, anonymous in the first half, was dropping back and influencing things.

Gundogan was twice off target for City with a header on the stretch and a volley, then Mahrez went on a darting run and had a thumping shot pushed wide by Lloris.

Mason had sent on Bale and Moussa Sissoko midway through the half but as City’s legs and minds began to tire, Guardiola was reluctant to change.

Yet his patience paid off when Sterling won a free-kick from Serge Aurier and De Bruyne delivered it for Laporte to head home with a cute angled header.