Tiger Woods was rushed to a hospital with serious leg injuries on Tuesday morning in Los Angeles County after he was involved in a single-car crash in a hilly area known for car crashes.

Here’s what we know so far:

At about 7 a.m. Pacific time on Tuesday, the police received a 911 call about a crash on Hawthorne Boulevard near Rancho Palos Verdes, a coastal city of about 42,000 people in Los Angeles County.

Officers arrived at the scene six minutes later and found Tiger Woods trapped in an S.U.V. that had rolled over, said Alex Villanueva, the Los Angeles County sheriff.

Deputy Carlos Gonzalez, the first officer on the scene, said he had determined that firefighters should extract Woods from the vehicle and that he had spoken to Woods while they waited.

Emergency workers used an ax and a Halligan tool, a type of pry bar, to remove the windshield of the vehicle and extricate Woods, said Daryl L. Osby, chief of the Los Angeles County Fire Department. Woods was put on a backboard and taken by ambulance to Harbor-U.C.L.A. Medical Center, the nearest trauma center, Deputy Gonzalez said. Woods underwent emergency surgery, according to his longtime agent, Mark Steinberg.

What was Woods’s condition?

Woods was conscious when the first officer arrived on the scene and answered several questions, such as his name, where he was and the time of day. Deputy Gonzalez said Woods had seemed “lucid and calm.”

Chief Osby said that Woods was in stable condition but that he had “serious injuries” to both of his legs. The chief did not explain further. He said that he was not sure what other injuries Woods might have sustained but that any additional injuries would not be “life endangering.”

According to Sheriff Villanueva, Woods’s manager did not want any more information released on his condition or any update on his surgery.

What caused the crash? Was Woods speeding?

It will take traffic investigators days or weeks to complete their investigation into the cause of the crash.

Woods was driving downhill on a curved road. The speed limit is 45 miles per hour, but Deputy Gonzalez said he had sometimes seen vehicles going more than 80 miles per hour. Sheriff Villanueva said it appeared that Woods had been driving at a “greater speed than normal.”

The vehicle Woods was driving hit the median strip, Sheriff Villanueva said, went over it and then traveled several hundred feet, rolled several times and came to rest in the brush on the opposite side of the road. There were no skid marks, indicating that Woods had made no attempt to brake, the sheriff said, and that his first contact had been with the center median before he crossed into the opposing lane of traffic. 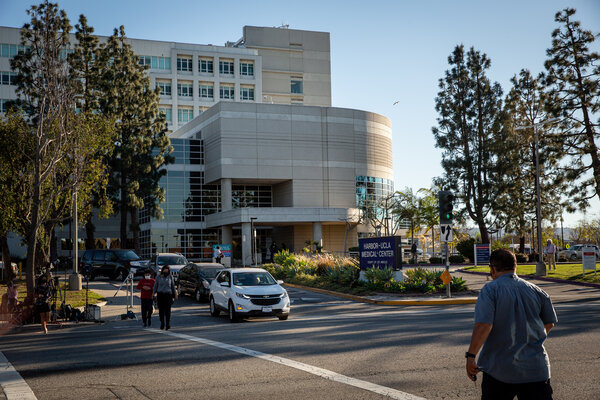 According to Sheriff Villanueva, there was no evidence of impairment, such as alcohol or pill bottles, an odor of alcohol or unusual behavior from Woods. Because Woods did not seem impaired, the sheriff said, “there was no effort to draw blood, for example, at the hospital.”

There was no evidence that Woods was being followed by any other vehicles, and it was unknown whether he might have been looking at his phone or otherwise distracted at the time of the crash, the sheriff said.

Weather, such as a wet road or fog, was not a factor in the crash, according to the sheriff. Woods was wearing his seatbelt, and airbags in the car deployed, Deputy Gonzalez said. The bumper and the front end of the car were “destroyed,” but the interior cabin of the vehicle was “more or less intact,” Sheriff Villanueva said.

Investigators will probably be able to obtain some information about what Woods was doing through the vehicle’s event data recorder, or “black box.” Also, Deputy Gonzalez was wearing a body camera when he arrived at the scene. It is unclear if there were any witnesses to the crash; the first person who called 911 lives close to where the vehicle settled and heard the crash, Deputy Gonzalez said.

Why was Woods in the Los Angeles area?

Woods, who lives in Florida, was in Southern California to host, but not to compete in, the Genesis Invitational at Riviera Country Club in Pacific Palisades last weekend. Genesis Motor is a luxury vehicle division of Hyundai. Woods was in a 2021 Genesis GV80 S.U.V., which was provided to him during the tournament; he is known for always driving himself in a courtesy car at tournaments.

Woods stayed after the weekend to do a promotional photo shoot for Golf Digest, and when the crash happened, according to ESPN, he was on his way to a photo shoot with the N.F.L. quarterbacks Drew Brees and Justin Herbert.

Where did Woods’s career stand before the crash?

Even before Tuesday’s wreck, it was not clear when Woods, 45, might play again or whether he would be able to pursue a record-tying sixth Masters victory this spring.

Woods was trying to recover from his fifth back operation, a microdiscectomy he underwent last month.

When he appeared on CBS on Sunday during the final round of the Genesis tournament, Woods was asked whether he would compete at the Masters at Augusta National Golf Club in April. “God, I hope so,” he said. “I’ve got to get there first.”

Although Woods said last month that he expected to miss at least two tournaments, he did not publicly rule out playing in the Masters, which he last won in 2019. On Sunday, he said he was “feeling fine, a little bit stiff” and was awaiting another magnetic resonance imaging scan to evaluate his progress.

In the meantime, he said, he was “still doing the mundane stuff that you have to do for rehab, the little things before you can start gravitating toward something a little more.”

Woods tied for 38th place in the 2020 Masters, which was played in November because of the coronavirus pandemic. Although he shot a 10 on the 12th hole during the final round, he birdied five of the final six holes.