The Green Bay Packers secured the top seed in the N.F.C. playoffs, while making an excellent argument for Aaron Rodgers as the N.F.L.’s most valuable player. The Buffalo Bills got the No. 2 seed in the A.F.C., while effectively ending the Miami Dolphins’ season. And the Cleveland Browns, after 17 seasons that ended in frustration, are back in the playoffs. It was an exciting Sunday even by Week 17 standards, and the playoff field was nearly finalized heading into the nightcap between Washington and Philadelphia.

Here’s what we learned:

The road through the N.F.C. playoffs goes through Green Bay. Perhaps the finest regular season of Aaron Rodgers’s career — one that has included two Most Valuable Player Awards — finished with a 35-16 win over the Chicago Bears and an N.F.C.-best record of 13-3. That gives the Packers home-field advantage throughout the playoffs, forcing opponents to come to Lambeau Field, which won’t have its raucous fans but will still have the frigid weather in which Rodgers has always thrived.

Rodgers added four more touchdown passes on Sunday, giving him a career-high of 48, which is tied with Dan Marino for the fifth-most in a season. Over the last three seasons, Rodgers, who seemed miffed when the Packers drafted his potential replacement in April, has 99 touchdown passes and just 11 interceptions. 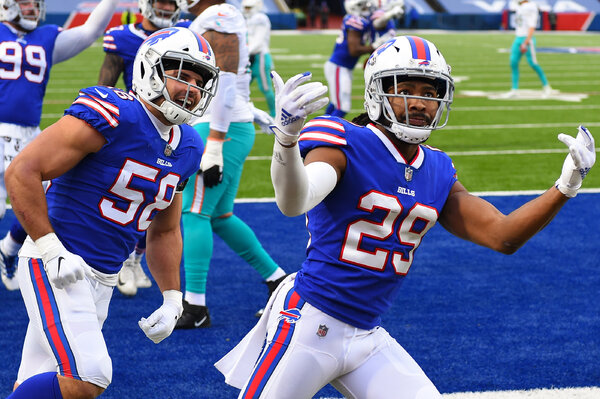 The Bills weren’t taking any chances — and the Dolphins suffered for it. The Bills had already clinched the first A.F.C. East title — their first since 1995 — two weeks ago, while Miami would have guaranteed itself a wild-card spot with a win on Sunday. Despite that, the Bills began the day with Josh Allen at quarterback, let the M.V.P. candidate power them to a 28-6 lead at halftime with three touchdown passes, and then had their defense and backup quarterback Matt Barkley take care of the rest of the game in a 56-26 laugher that never felt remotely close. The Bills captured the No. 2 seed in the A.F.C. with a 13-3 record — their best finish since 1991 — while the Dolphins were eliminated from playoff contention thanks to their own loss and Indianapolis’ victory over Jacksonville.

You can’t end a 17-season playoff drought without a little drama. Despite topping 10 wins for just the second time since 1995, the Cleveland Browns entered the final day needing a win, or some help from other teams, to reach the postseason for the first time since 2002. Pittsburgh decision to rest of Ben Roethlisberger was helpful, but some doubt was introduced when a coronavirus outbreak closed Cleveland’s facilities and left the team without three of its four starting defensive backs. The Browns took a 24-9 lead early in the fourth quarter, but then had to sweat after Pittsburgh’s Mason Rudolph threw two touchdown passes to close the gap. An onside kick attempt after the second touchdown nearly succeeded, but the Browns, shaking off years of bad breaks, recovered and held on for a nail-biting 24-22 win.

Adding a six-time Super Bowl-winning quarterback is helpful. The Tampa Bay Buccaneers occasionally tantalized last season, but recognized they needed some stability on offense to complement their terrific defense. They replaced the enigmatic Jameis Winston with Tom Brady, who was coming off a difficult season in New England but was seen as a player who could accentuate the team’s strengths. Good call. Brady had a few hiccups along the way, but he finished the year with 4,633 yards passing and a franchise-record 40 touchdown passes. More important, Sunday’s 44-27 victory over the Atlanta Falcons gave the Buccaneers an 11-5 record and made them the No. 5 seed in the N.F.C. for their first trip to the playoffs since 2007.

The Titans are far from a one-man show. Derrick Henry rushed for 250 yards and two touchdowns, becoming the eighth player in N.F.L. history to rush for 2,000 yards in a single season. But it was a few crucial plays from quarterback Ryan Tannehill late in the game that finished off a thrilling 41-38 win over the Houston Texans and gave Tennessee the A.F.C. South title. With the Titans trailing by 4 with less than two minutes to play, Tannehill sold a play-fake to Henry before running in a 5-yard touchdown. Houston tied the game with a field goal, but Tannehill got the ball back with just 18 seconds remaining and immediately completed a 52-yard pass to A.J. Brown that, along with a 4-yard run by Henry, set up Sam Sloman’s game-winning 37-yard field goal.

Some teams get more help than others in making the playoffs. The Indianapolis Colts took care of business in a 28-14 win over the Jacksonville Jaguars, but they made the playoffs because of Miami’s loss to Buffalo. Thanks, Dolphins!

The Baltimore Ravens got one of the other A.F.C. wild-card spots by winning a fifth consecutive game — four of which came against teams with losing records. Thanks, schedule makers!

And the Chicago Bears, despite a midseason lull and a trouncing by Green Bay on Sunday, earned an N.F.C. wild-card berth thanks in large part to an ankle injury sustained by Kyler Murray of the Arizona Cardinals. Without Murray for much of the game — and with the second-year quarterback hobbled even when he did return — Arizona lost to the short-handed Los Angeles Rams, 18-7. Thanks, football’s brutal nature!

It wasn’t meant to be for Dallas. The Cowboys appeared lost when quarterback Dak Prescott fractured his ankle in Week 5. But thanks to the rest of the N.F.C. East being largely hapless, Dallas not only survived until the final week of the season but had a decent chance at a division title. The rival Giants pushed them around for much of the day, looking like a team that was far more talented than its record indicated, but even so the Cowboys had the ball in the game’s final two minutes, trailing by only 4 points, and drove all the way to the Giants’ 7-yard line. A sack and an incomplete pass set up a third-and-goal from the 17-yard line with 1 minute 24 seconds remaining and that’s when Andy Dalton got desperate. He ran from pressure before throwing a brutal interception to Xavier McKinney that effectively ended the Cowboys’ season.

One* Sentence About Sunday’s Games

*Except when it takes more.

Browns 24, Steelers 22 It came in a game in which Pittsburgh played without the defensive stalwarts Cam Heyward and T.J. Watt, but Cleveland still impressed on the ground, racking up 192 yards on 31 carries, letting the team’s biggest strength carry it to the playoffs.

Bills 56, Dolphins 26 Miami was hopeful that Tua Tagovailoa could take care of things himself, since Ryan Fitzpatrick — the N.F.L.’s equivalent of an ace relief pitcher — was placed on the Covid-19 reserve list. It didn’t work out. While Tagovailoa threw for 361 yards and a touchdown, the rookie was also intercepted three times, including a pick-six, and never mounted much of a challenge to Buffalo’s dominance on both sides of the ball.

Packers 35, Bears 16 The beeping sound you hear is Chicago backing into the playoffs. The Bears came into the day with control of their own fate, but needed help to earn a wild card after quarterback Mitchell Trubisky was largely ineffective and running back David Montgomery was limited to 3.1 yards a carry.

Colts 28, Jaguars 14 Indianapolis appeared to be teetering on the edge of a second consecutive brutal second-half collapse, but some terrific play by the team’s defense, and Jonathan Taylor’s 45-yard touchdown run in the fourth quarter, powered the Colts to victory. Taylor entered the season as a backup to Marlon Mack, but his 253 yards rushing and two touchdowns on Sunday gave him 1,169 yards and 11 touchdowns in a terrific rookie year.

Titans 41, Texans 38 There were plenty of good things to say about Tennessee after it clinched a hard-won A.F.C. South title, but Houston’s players could hold their heads up high after a terrific second half by quarterback Deshaun Watson made the division rival Titans fight for it.

Buccaneers 44, Falcons 27 Antonio Brown (11 catches, 138 yards, two touchdowns) and Chris Godwin (5-133-2) both had terrific games for Tampa Bay, but the Buccaneers will be holding their collective breath awaiting an update on the health of wide receiver Mike Evans, who injured his knee on an incomplete pass in the end zone. Evans had 46 yards receiving before the injury, giving him 1,006 for the season — he is the first N.F.L. wide receiver to have 1,000 or more yards in each of his first seven seasons.

Ravens 38, Bengals 3 J.K. Dobbins showed off why many people believe he is Baltimore’s top running back going forward, rumbling for 160 yards and two touchdowns on just 13 carries. But Lamar Jackson was nearly as effective, rushing for 97 yards on 11 carries, which left him with 1,005 for the season. He now owns the No. 1 and No. 3 rushing seasons by a quarterback in N.F.L. history.

Seahawks 26, 49ers 23 San Francisco was leading by 9-6 after three quarters, but Russell Wilson took over in the fourth, throwing two touchdown passes to Tyler Lockett. Alex Collins ran in a score as well and the game would not have been as close if not for a garbage-time score by San Francisco’s Jeff Wilson Jr.

Saints 33, Panthers 7 Covid-19 protocols led to New Orleans being without nearly all of its running backs, but that did not slow the team down in the slightest. Ty Montgomery, who plays some wide receiver but also has experience at running back, filled in admirably, carrying the ball 18 times for 105 yards. That, combined with Drew Brees’s three passing touchdowns and a rushing touchdown from Taysom Hill, was more than enough against Carolina.

Rams 18, Cardinals 7 It might not work in the playoffs, but Los Angeles was able to end Arizona’s season with an offense led by quarterback John Wolford, who came into the day with zero career passing attempts and left it with 231 yards passing, a team-leading 56 yards rushing and his first career victory.

Giants 23, Cowboys 19 In what may be the perfect encapsulation of the N.F.C. East this season, the Giants’ victory came down to running back Wayne Gallman recovering his own fumble in the closing minutes, just two plays removed from Dallas’ Andy Dalton virtually handing Big Blue the win with an interception.

Vikings 37, Lions 35 Justin Jefferson recorded 133 yards receiving, which put him at 1,400 for the season. He broke Randy Moss’s franchise record for a rookie receiver, and finished less than 100 short of the 1,473 Bill Groman had for the A.F.L.’s Houston Oilers in 1960.

Minnesota’s skill players were undoubtedly happy to pad their statistics, but they should keep in mind that Detroit’s defense was so bad this season that it allowed 6,716 total yards and 519 points, breaking franchise records set during the Lions’ winless season in 2008.

Chargers 38, Chiefs 21 It came against Kansas City’s backups, but Chargers quarterback Justin Herbert was awfully impressive in throwing for 302 yards and three touchdowns in a win that has the potential to save Coach Anthony Lynn’s job. Herbert was not even expected to start this season, but after being forced into duty in Week 2, he finished with 4,336 yards passing and a rookie record 31 passing touchdowns.

Raiders 32, Broncos 31 This game did not have any playoff implications, and it was often fairly ugly, but it had plenty to offer. Denver took a late lead with a 92-yard touchdown pass from Drew Lock to Jerry Jeudy. Las Vegas took it back with a 1-yard Josh Jacobs touchdown run and a 2-point conversion with just 24 seconds remaining. After swings like that, the game finished in the only logical way: Maxx Crosby of the Raiders blocked Brandon McManus’s attempt at what would have been a 63-yard game-winning field goal.

Patriots 28, Jets 14 In what was Coach Adam Gase’s last game with the club, and might be Sam Darnold’s last as its starting quarterback, the Jets went into the fourth quarter tied, 14-14, and then fell apart, allowing Cam Newton to throw a pair of game-sealing touchdown passes. New England came into the day with an N.F.L.-low eight touchdown passes this season, but managed four — including one by a wide receiver — against the Jets.