Follow MailOnline’s live blog for all the latest news and updates on the 2022 Wimbledon Championships:

Chelsea and England star Mason Mount is among the crowds at Wimbledon today.

The midfielder had an impressive season for the Blues, scoring 13 goals in all competitions, is currently enjoying the off-season.

He is due to report for pre-season training with manager Thomas Tuchel in the US next week.

It will be Chelsea’s first season under new American owner Todd Boehly – who bought the club from Russian businessman Roman Abramovich earlier this year. 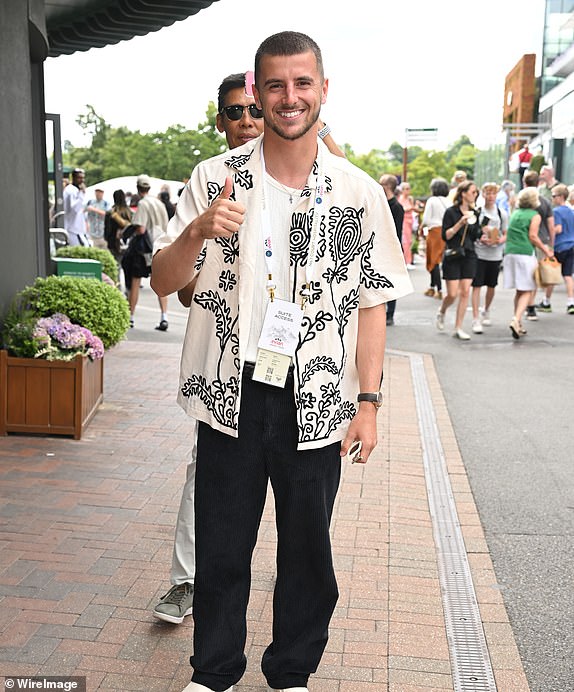 Temperatures are set to hit a balmy 26C (79F) tomorrow with similar temperatures through to Saturday’s finale.

And beyond that – temperatures could hit 29C (84F) on Sunday and Monday next week. I don’t want to jinx it but… here comes the summer? 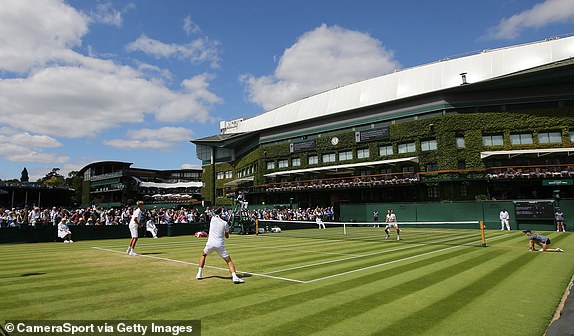 Simona Halep had forgotten what winning looked and felt like. She had begun to wonder whether she would ever get the habit back.

A muscle tear she sustained in May last year, during a match against Angelique Kerber in Rome, brought to an end a 373-week tenure in the top 10 dating back to 2014: the eighth longest consecutive run in WTA history.

The psychological and physical challenges of recovery had been equally difficult, the 30-year-old related on Monday night, after a brutal victory over the Spanish number 4 seed Paula Badosa suggested that a second Wimbledon title could be hers.

Halep, the 2019 champion and 16 seed, set the tone with a backhand pass to break Badosa in the third game, broke again to love and the Spaniard seemed a player utterly lost; unable to find the lines or establish any kind of rhythm. 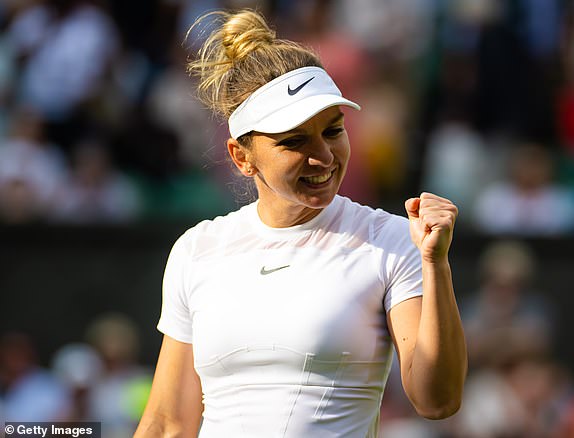 Former British ace Laura Robson is playing in the Ladies’ Invitation Doubles today. She is playing on Court 3 alongside Daniela Hantuchova.

Once a promising star of British tennis, she suffered a string of injuries which saw her miss large chunks of the WTA tour and struggled to return to form after surgery in 2016. 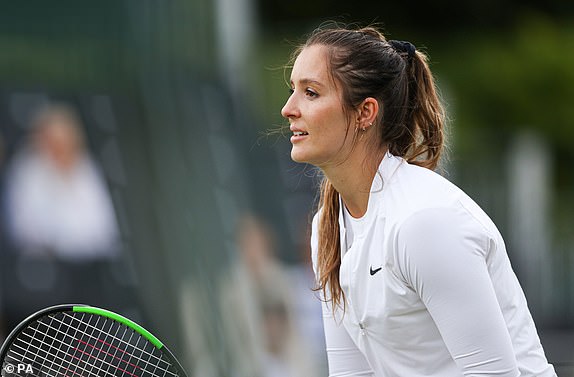 The last Brit standing in Wimbledon! How Cameron Norrie, 26, became a tennis champion despite a moped crash that almost scuppered his career… and why he doesn’t own a car (even though he’s worth £3million)

All (British) eyes will be on Cameron Norrie today!

The last Briton standing in the Men’s Singles championship will face Belgian David Goffin in his first ever quarter-finals appearance at SW19.

And while the 26-year-old British hopeful looked relaxed as he cycled to the All England Club for practice yesterday he admitted last night: ‘It’s always going to be a lot of pressure and a lot of people watching what’s going on.’ 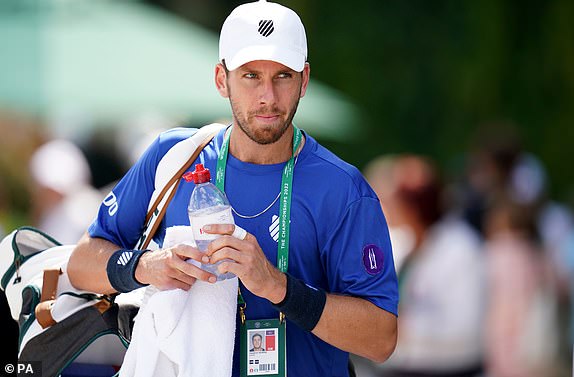 Who is Cristian Garin and how can he ruin Wimbledon for Australia? Everything you need to know about Nick Kyrgios’ dangerous quarter-final opponent

One man stands in the way of Nick Kyrgios progressing to the semi-finals at Wimbledon on Wednesday night: unseeded Chilean player Cristian Garin – who has already ended the fairytale run of one Aussie this tournament.

Garin earned his way through to a quarter-final matchup against Kyrgios after coming from two sets down to beat Aussie Alex de Minaur in a thriller on Monday night.

The 26-year-old Chilean is currently ranked 43rd in the world, but has risen as high as 17th on the back of five ATP titles in his career. However, he has previously gone no further than the fourth round of a Grand Slam tournament.

Garin had an impressive junior career, winning the 2013 Junior French Open and becoming the youngest Chilean to win an ATP match – and crucially, he is currently in red-hot form and Kyrgios will not have it easy.

Click above to read the profile of Cristian Garin… 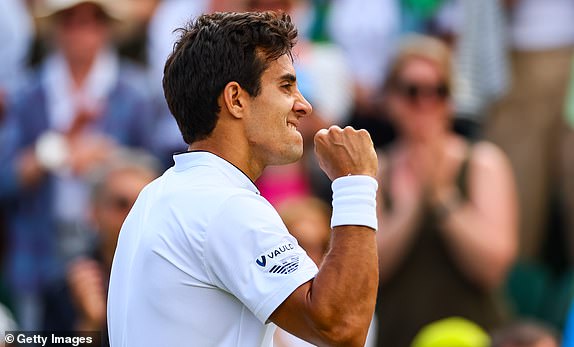 It was a tennis match. That’s all it was really. Not an event, not a prize fight, not weasels in a sack, not World War III. Nick Kyrgios came to Centre Court and won a tennis match. He can surprise you like that, sometimes.

So it’s an act. The rest of it. The tantrums, the bad language, the bullying, the confrontations with authority. He arrived on court in red shoes, and wore a red cap for his interview. The referees will speak to him about this, because Wimbledon is a white-out. But it’s hardly a capital offence.

At one stage he was chuntering at the umpire about a challenge that was so misjudged it was comical and a voice from the crowd shouted: ‘Stop moaning.’ Kyrgios buttoned it, smartly.

It was the only time across just over three hours of play when the tiresome toddler inside slipped the gate. 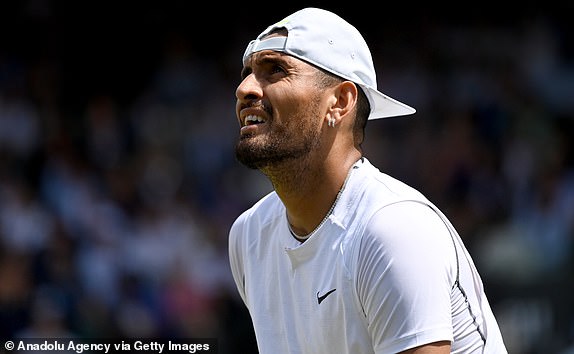 Order of play: Defending champion Novak Djokovic is up first on Centre Court as he takes on Jannik Sinner for a place in the final four… as Britain’s Cameron Norrie looks to reach his first Grand Slam semi-final

Day Eight saw Rafael Nadal progress to the quarter-finals with a straight-sets victory over a stubborn Botic van de Zandschulp, with a last-eight clash to come against Taylor Fritz on Wednesday.

There were also victories for Nick Kyrgios, who beat Brandon Nakashima in a five-set thriller, and Simona Halep, who breezed past fourth seed Paula Badosa to become the last remaining Grand Slam winner in the women’s singles draw.

Defending champion Djokovic will get the action underway on Centre Court as he takes on a high-flying Jannik Sinner for a place in the semi-final, in what is expected to be a thrilling match-up.

Following Djokovic on Centre Court will be third seed Ons Jabeur, who is yet to drop a set en route to the quarter-finals, as she takes on unseeded Marie Bouzkova.

Britain’s Norrie will look to cement a place in a Grand Slam semi-final for the first time as he takes on David Goffin this afternoon on Court 1. The ninth seed had previously never gone beyond the third round at a Slam.

Click above to read the full order of play today… 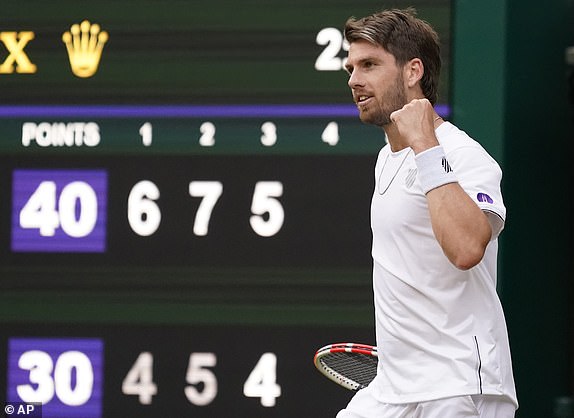 It was a jam-packed day yesterday, in which Australian tennis ‘bad boy’ Nick Kyrgios and Spaniard Rafael Nadal progressed in the Mens’ Singles.

But it was more disappointment for British entries again yesterday, with doubles pair Harriet Dart and Heather Watson crashing out.

Novak Djokovic is on Centre Court trying to book his place in the semi-finals – but will have to overcome Italian 10th seed Jannik Sinner in order to do so.