If this were 2020 — and let’s never go back there, please — the Yankees’ regular season would be over after 60 games. They would still be alive, but eagerly rooting for other teams to lose, allowing them to qualify for the eighth spot in a bloated playoff field.

But it is 2021, which means the old postseason format is back, with only five teams per league getting an invitation. The Yankees would not make that cut.

They are 31-29, fourth in the American League East, and have been swept in each of the last two weekend series: first in Detroit to the rebuilding Tigers, and then in the Bronx to the revitalized Red Sox. On Sunday night, they struck out 11 times and left 12 runners on base in a 6-5 loss in 10 innings.

The plate umpire, Gabe Morales, had a bad night. But the Yankees have had two wretched weeks, going 3-10 since May 24.

“We’ve still got about 100 games left in this season,” Aaron Judge said late Sunday night. “That’s what we’ve got to focus on, is the bigger picture. We can’t sit here and listen to outside noise telling us we’re this and that.”

On Sunday night, the loudest source of outside noise came from Alex Rodriguez on the ESPN broadcast. Rodriguez is no longer a Yankees adviser, but he spent 12 seasons with the team and was unsparing in his criticism of the roster. It was refreshing candor from Rodriguez, whose knowledge of the game is undeniable, despite his tangled history within it.

The Yankees’ lineup included eight right-handed hitters on Sunday — all except Brett Gardner, the No. 9 batter who is hitting .190 — against a right-handed starter, Garrett Richards. The Yankees grounded into three double plays, giving them 58 for the season, the most in the majors.

“When you have a right-handed dominant lineup, it induces more double plays,” Rodriguez said, before drawing off his own experiences. 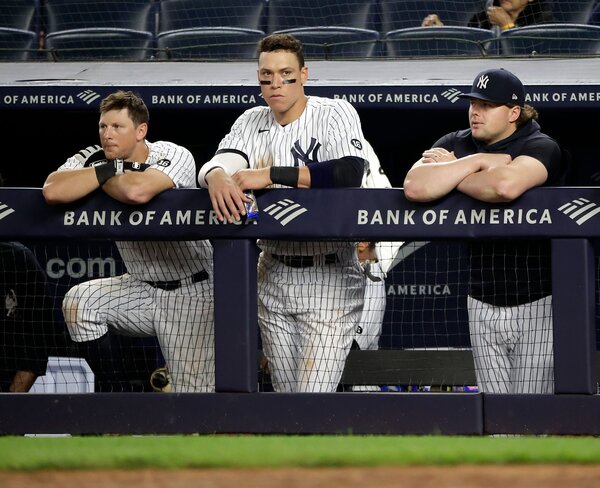 Rodriguez praised Gene Michael, the longtime Yankees executive, who acquired players like Paul O’Neill and Tino Martinez to balance out the team’s lineup. Similarly, Rodriguez was surrounded with left-handed batters like Jason Giambi and Hideki Matsui.

“So I don’t understand all the righty hitters,” Rodriguez said. “I’ve never been a big fan of it. And especially as a Yankee, I want to see left-handed hitters.”

Rodriguez has feuded in the past with General Manager Brian Cashman, and this is not the first time he has criticized him or his strategy. Cashman, the G.M. since 1998, also learned plenty from Michael, who nurtured the farm system that gave rise to a dynasty. Cashman’s teams have always had a winning record and have reached the postseason 19 times.

But this does not look like the kind of roster that will return the Yankees to the World Series for the first time since 2009. Like many teams, the Yankees have been hit hard by injuries (to Zack Britton, Corey Kluber, Luke Voit and the switch-hitting outfielder Aaron Hicks). And while the pitching staff has been surprisingly strong, the offense is abysmal.

After scoring an A.L.-best 5.25 runs per game in last year’s 60-game season, the Yankees averaged just 3.72 runs in their first 60 games of this season. They have run into 28 outs on the bases, the most in the majors, but that’s about the only running they do — the Yankees have just 14 stolen bases, fewest than any team other than Cincinnati.

The team batting average, on-base percentage and slugging percentages are .228, .315 and .371. Those marks are roughly identical to the career figures of longtime former catchers like Kelly Stinnett and Dave Valle, who had respectable careers but rather ordinary bats.

The Yankees’ catcher of the moment lives in that neighborhood: Gary Sanchez, at .210/.331/.384, plus uneven defense and baserunning misadventures. Rodriguez suggested that learning new catching techniques, and the responsibility of the position, had worn down Sanchez’s offense. He rarely gets a chance to be designated hitter.

“The conundrum for the Yankees is with Stanton as the D.H., it freezes that Yankee offense,” Rodriguez said on the telecast. “Gary Sanchez could be a very good D.H., and you have a lot of Yankees out there that are playing out of position, and it creates for a confusing roster.”

Giancarlo Stanton is 2 for 24 with 12 strikeouts in his return from a quadriceps injury. He has not played in the field since 2019 and is signed through 2027. When he is healthy and hot, Stanton, 31, can carry a team, and he hits the ball harder than anyone else in baseball — an average of 98.6 miles an hour off the bat.

But you have to connect to make that matter, and Stanton strikes out in more than 30 percent of his plate appearances. The Yankees as a team fan at a 25.3 percent rate, higher than the major league average (24.1 percent) in this whiff-happy season. Even the reliable D.J. LeMahieu is striking out at nearly double his rate from last season, and he has gone 16 games without an extra-base hit.

“I don’t think he’s that far off; some balls he’s stinging are right at people,” Manager Aaron Boone said of LeMahieu, who is hitting .253. Boone reaffirmed his faith in the rest of the hitters, too.

“I see the work they’re putting in, I see the adjustments certain guys are making,” he said. “I feel like I’m seeing, with a number of guys, the quality of contact and the at-bat quality picking up, especially this last week. We’re seeing some guys gain some traction. Now we’ve got to get everyone involved though, because for our lineup to be heavy, it’s got to be one that wears you down.”

The lineup is too light — and too right — these days, and too many hitters have similar profiles, ripe to be exploited by rival game planners. Unless Cashman can make a trade or two, the Yankees’ hopes rest mostly on their past.

“It has to do with the history, the talent that my teammates have, what I’ve seen them do over the years,” Sanchez said through an interpreter Sunday, explaining his confidence in the team. “I’ve played with them for a long, long time. There’s no doubt that we’re going to be able to get out of it.”