Man, Atlanta came right after film and TV mogul Tyler Perry with this week’s hilarious parody… and they didn’t pull any punches.

Thursday’s episode finds Van driving with her daughter Lottie to a massive film production complex called Chocolate Studios, run by the elusive Kirkwood Chocolate. (For the record, Tyler Perry owns a 300-acre film production complex in Atlanta called Tyler Perry Studios.) On their way in, they pass a tour guide who touts Chocolate Studios as “a studio for the culture, and by the culture.” The complex includes state-of-the-art soundstages, along with an ominous building that Mr. Chocolate has converted into “a personal office… No one’s allowed in, or out.” Van is there to shoot a scene on one of Chocolate’s sitcoms as a day player; a friend told her about it, and she thought she’d try it. She admits, though, that she hasn’t watched many of Chocolate’s shows or movies. And she’s not alone: The girl doing her hair confesses, “I hate it, personally.” (Van also meets a maintenance guy named Shamik, and they seem to share a spark.)

Van shoots a scene on a brightly lit multi-cam sitcom, where her character consoles a friend having marital issues. The friend’s husband barges in angry: “Didn’t I tell you you couldn’t have any friends?” The actors stop, though, when a faceless voice from an intercom interrupts, suggesting small tweaks to the scene, and the production staff quickly obeys. When they try the scene again, the husband yells at Van’s character to leave, and Lottie, standing off-camera, tells him to shut up. Van scrambles to apologize, but the voice on the intercom wants to see more of the girl. Lottie asks where that voice is coming from, and it replies: “I’m everywhere, like God. I’m Mr. Chocolate.” He puts Lottie in the scene telling the husband to shut up — and when an assistant reminds him that Lottie wasn’t in any of the previous scenes, he says simply: “We’ll fix it in post.” 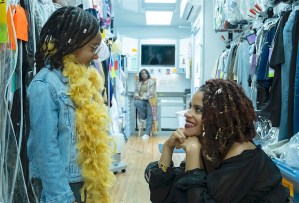 They send Lottie to wardrobe, and the assistant reassures Van: “With the way that Mr. Chocolate shoots, you’ll both probably still be done by lunch.” (For the record: Tyler Perry currently has eight TV shows airing on various networks, including The Oval and Sistas, and has said he doesn’t use a writers’ room, preferring to write and direct every episode himself.) While Lottie tries on outfits, Van confides in a kindly older woman, telling her she’s not sure about putting Lottie in a TV show. The woman quotes a Bible verse to say that a person who’s not open to the joy of a child isn’t open to true happiness — and Lottie does seem happy. She shoots a whole new scene on the sitcom, and another mom tells Van that Mr. Chocolate is probably writing a kid’s show for her right now. (The mom even pitches her own kid to play Lottie’s “best friend who’s good at computers.”)

When Van looks up, though, Lottie has vanished. An assistant tells her Lottie has already moved onto the next scene — and she’s now been written into 14 more scenes. (She’s number three on the call sheet!) Van demands to talk to Mr. Chocolate… but the assistant has never actually talked to him in person herself. Shamik offers to take Van to the next stage, though, and they chat along the way, with him revealing Mr. Chocolate gave him this maintenance job after he got out of prison, which gives him time to do crypto mining at night. (He slips her his business card, too.) On the soundstage, they’re shooting a drama where Abe Lincoln is crying and a Black woman says to him: “You white piece of s–t. I hope you get shot in a theater.” Lottie’s not there, though; she’s already onto the next stage. Van is fed up, but a woman there can’t help her: “I’m directing two pilots and starring in another… Mr. Chocolate is the only person who knows what’s going on.”

Van insists on being taken to where Lottie is now, and the woman complies, but she also says Van will be happy when Lottie “wins that BET Award.” By the time they get to the next stage, Lottie is shooting a serious dramatic scene that ends with her on-screen mother… eating a crack sandwich? But once the scene ends, Lottie disappears, with an assistant assuring Van she’s safe: “Mr. Chocolate is always watching, and he has plans for her.” Van loses it, asking if they’re all in a cult, and tries to get a security guard to help — but he’s also just an intern fetching coffee. She stares up at the intercom and orders it to give her Lottie back, and after a pause, the voice replies: “No.” So Van marches over to Chocolate’s office building, where two armed guards in military garb stop her from entering. The old lady from earlier comforts her as she cries to her about Lottie — and then the old lady pulls out a gun and shoots one of the guards in the foot! (The other guard says they were just holding fake M-16s from one of Chocolate’s movies.) 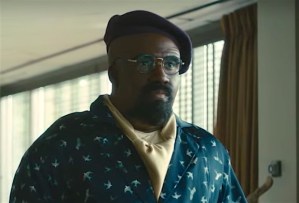 Van sneaks inside and finds Kirkwood Chocolate in a room filled with monitors and thousands of script pages, banging away at a piano that translates his playing into more scripts. (“Steve Jobs made that for me,” he brags.) Kirkwood — a heavy-set Black man with a booming voice — shows Van that Lottie is shooting yet another scene on yet another stage. She threatens to call the police, but he says he owns the police: “I can do whatever I want!” Van labels him a con man: “You just make unrelatable shit that takes advantage of the people you say you’re claiming to help.” Kirkwood points out that today, she’s been a struggling single mom with a formerly incarcerated love interest and a gun-toting Christian grandma: “Face it, Vanessa: You’re a Kirkwood Chocolate woman.” The assistant brings in Lottie, and she had a great time, but when Kirkwood offers her six seasons of a kids’ show, Van says no… even though Lottie wants to. Van has to drag Lottie away crying, with Kirkwood yelling after them: “She’ll be Spurned Woman #8 when I’m done with her!” (P.S. The actor playing Kirkwood Chocolate is officially credited as “Kirkwood Chocolate,” as Teddy Perkins was in Season 2, but we’re pretty sure that’s series star Donald Glover underneath all that makeup.)

Van returns home with Lottie and apologizes to her, telling her she wants her to be old enough to decide what she wants before committing to something like that. She gives Lottie a big hug and promises she’ll always be there for her. After Lottie runs off to her room, Van checks out Shamik’s business card — and sees he wrote on the back: “Let’s have sex in the boiler room.” But nah: Instead, she tells Lottie she’s making mac and cheese.