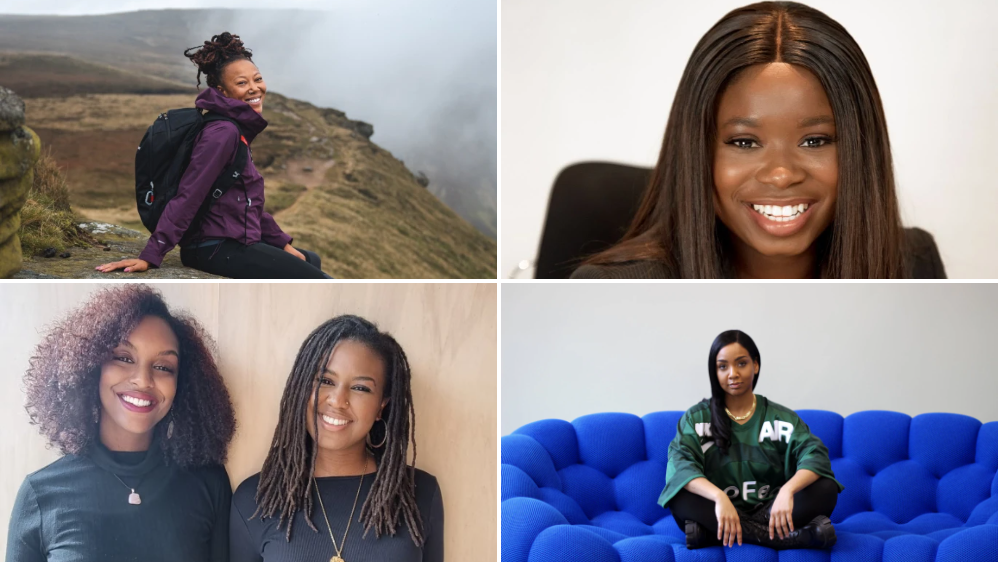 The theme for Black History Month this year is Time for Change: Action Not Words.

So here are just a few of the pioneering women who are shaking things up through their amazing ventures.

Why not continue to support these incredible women all year round and not just for a month?

Get ready to be inspired.

Despite growing up near the countryside, Rhiane Fatinikun showed little interest in the great outdoors. That all changed in 2019.

‘I started feeling anxious and wanted to do something positive for my wellbeing,’ says Fatinikun, 35, who lives in Greater Manchester. ‘I was conscious of the lack of representation in the outdoors so I set up Black Girls Hike [bghuk.com] to create a community and encourage others to reap the benefits of nature within a safe space.’

Although Black Girls Hike started in the north-west, there are now communities across the UK that are beginner-friendly and open to those over 18.

‘My experience in the countryside has been overwhelmingly positive. It’s the company I enjoy as you have deep and meaningful conversations,’ Fatinikun says.

Earlier this year, she received a Royal Geographical Society award for her efforts and has been named one of the top 40 future leaders by the Black Cultural Archives.

‘It was so exciting for my niece to see my face as part of the exhibit in Brixton but representation is so important,’ she says. ‘Black History Month is about taking up space in places where we weren’t necessarily represented before and for organisations to show a commitment to equality rather than treating it as an afterthought.’

Lisa Carter’s experience as a young black mum forging a career in tech and sales was tough.

‘It came with a lot of sexism, racism and misogyny, so people who looked like me pretty much went unheard, unsupported and were often disrespected,’ says Carter, 42, who is based in Bristol. ‘After ten-plus years I was determined to build a company that enabled success while allowing people to feel safe, seen, heard and show up as their authentic selves.’

In 2019, she self-funded and launched Discussion Box, a virtual event platform for people who are location- or time- constrained.

‘I’m changing the narrative and continuing to develop the Discussion Box platform to be a space that provides an online global stage for more voices to be heard,’ says Carter, who turned over £1.2million in revenue in the first year of trading.

She opening the Discussion Box HQ on Colston Avenue in Bristol, the same street where slave trader Edward Colston’s statue was toppled in 2020.

‘As a black woman I’m aware that had I gone the investor route to financially support Discussion Box, I would have had just a 0.02 per cent [the percentage that went to black women founders in the UK between 2009 and 2019] chance of receiving venture capitalist funding. But to make real change there have to be more black people in positions of power.’

A straight-A student and ex-GB javelin thrower who earned a master’s degree before launching a career in tech, Kike Oniwinde Agoro is a doer. Annoyed by the lack of representation in her corporate workplace, she decided to do something about it and in 2016 created the BYP Network, a networking platform for Black professionals.

‘The lack of diversity in the workplace and the difficulties in meeting other black professionals in the City was stark,’ says Oniwinde Agoro, 30, who grew up in east London. ‘I thought, where were all the talented black students I’d met during my studies? Why weren’t they in these top corporations?’

Since its inception, BYP has amassed over 150,000 community members and worked with as Sky, TikTok and Meta.

‘Over 15,000 of our members have been up-skilled through mentorship, thought-leadership events and industry specific insight,’ says Oniwinde Agoro.

Each year the BYP conference is held during Black History Month. This year, it’s taking place today and tomorrow at The Mermaid London, visit byp.network.

Bianca Danielle, 31, and Kelly Morgan, 33 were only introduced a year ago but in that short space of time the tenacious pair have had an impressive impact on showcasing black-owned businesses in and around Manchester through their firm, Melanin Markets.

‘We were both keen to do something that increased the visibility of black businesses and highlight the importance of spending black,’ says Danielle.

Their first event was held at Manchester’s Contact Theatre in December, followed by another at the city’s Royal Exchange in May. Together, these events saw more than 3000 customers spend over £60,000.

‘We purposely choose unorthodox spaces that are not usually inhabited by the black community. It means we’re reaching new audiences that are diverse in age, race and religion. We’re also really vocal that these free events are inclusive to everybody to show their support, sample and shop. It’s why the joy in the room is always amazing. We’re breaking through glass ceilings and smashing stereotypes,’ says Danielle, who reveals that one of the aims is to have a permanent retail space.

In the meantime, there will be a special event called The King Edition at Manchester’s Home this Sunday (@melaninmarketsmcr), focusing on businesses led by black men, followed by further events this Christmas.

Be conscious of where you’re spending your  money and get behind small, independent businesses. If you’re a company, consider partnering with one. Ask, are we helping this business grow? An annual pop-up won’t do this!

Look at the consistency of your diversity and inclusion efforts and monitor this constantly. Be honest and critical.

Make inclusivity a priority, not an afterthought or token gesture. Working with black-owned businesses and nurturing black talent is not an annual calendar event.

October marks Black History Month, which reflects on the achievements, cultures and contributions of Black people in the UK and across the globe, as well as educating others about the diverse history of those from African and Caribbean descent.

For more information about the events and celebrations that are taking place this year, visit the official Black History Month website.