Easily one of the most adapted fairy tales, there aren’t too many new avenues to go down when telling Cinderella’s story. Name a “fresh” angle and there’s likely already a film or a television series that has adapted that same “clever” idea for its own use. Even the marketing and promotion for the newest version of “Cinderella,” which all lean heavily into the film as being a contemporary take on the classic story, has been done before, and recently: look no further than “Ever After” or “A Cinderella Story.” So with the deck quite literally stacked against the film, it’s remarkable just how effervescent and charming Kay Cannon’s “Cinderella” actually is.

The story follows our eponymous character, played by singer Camila Cabello in her cinematic debut, who dreams of rising out of her basement and becoming a dressmaker. The problem? Her tiny village is incredibly old-fashioned and doesn’t allow its womenfolk to be in business. As Ella chases her dreams, they put her in the path of Prince Robert (Nicholas Galitzine), who is similarly struggling with his own career problems (in his case, he doesn’t know whether he wants to be king, that old story).

Cannon, who directed the raunchy teen comedy “Blockers” back in 2018, understands that there’s little that can actually be done to set the story apart from its predecessors, and thus decides to intensify the fun of it all. The addition of music is also nothing unique to Cinderella tales, especially for those who grew up with either of the three Rogers and Hammerstein versions, but the choice to turn this oft-portrayed fairy tale into a jukebox musical is the smartest element of “Cinderella.”

We meet Ella and the townsfolk during a mixed rendition of Janet Jackson’s “Rhythm Nation” and Des’ree’s “You Gotta Be.” Jessica Weiss’ musical compositions are fantastic, creating a weight and intensity to all the song-and-dance sequences, especially a mashup of the White Stripes’ “Seven Nation Army” and Salt-N-Pepa’s “Whatta Man” that draws comparisons to the tango in “Moulin Rouge.” Ashley Wallen, who choreographed “The Greatest Showman,” another unexpected musical delight, brings a similar verve to her full-scale dance scenes, all of which are captured in full, sweeping crane shots by cinematographer Henry Braham for a touch of Old Hollywood musical panache.

With so many songs in the film, it’s odd that Cabello herself only gets one major solo, the infectious “Million to One.” It’s the film’s Oscar song, and boy, does the production want you to know that, having Cabello sing it three times in the film’s near-two-hour running time. To her credit, Cabello does well in her first feature film. Her Ella is spunky, with clearly believable aspirations, but the film never feels comfortable making her the star of it all, despite marketing trading on her name recognition. Long stretches of film go by without Cabello present, whether she’s running away to the marketplace while her stepmother (deliciously played by Idina Menzel) and stepsisters perform, or in favor of giving the prince more to do. It will be interesting to see what other acting gigs Cabello nabs next, if only so that we might finally get a chance to see her fully inhabit a role. 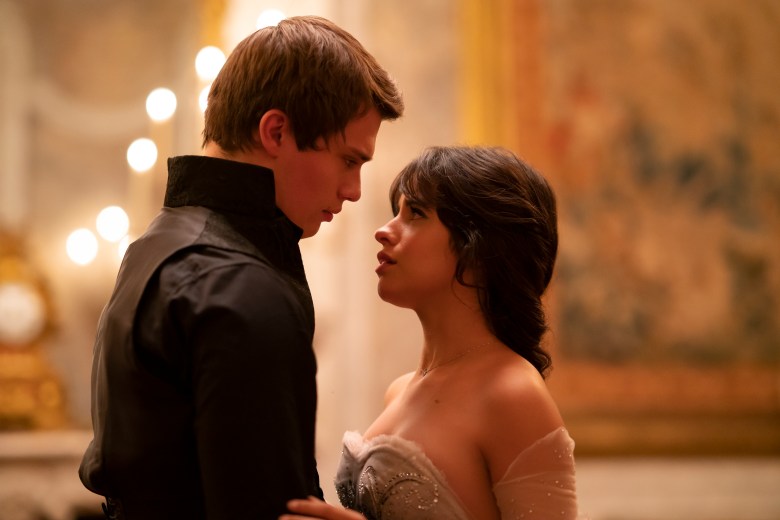 At times, it almost feels as if Prince Robert is the star of this “Cinderella,” with so much screen time devoted to his struggles against his stodgy father King Rowan (Pierce Brosnan), who so desperately wants to own a sea monster (just go with it), and his younger sister Gwen (Tallulah Grieve), a born ruler with the unfortunate impediment of being born a girl in a decidedly man’s world. The relationship between Robert and Ella, on the surface, feels like the film’s take on the Harry and Meghan story, which works for the most part, but Ella’s dream of dressmaking is often thrust into the backseat in the face of their blossoming romance.

Many of the moments involving the village’s anti-female tone are settled so quickly you’ll wonder why they weren’t solved years ago. There are glimmers of a darker examination of the ways women are cast aside for having ambitions, most notably in Menzel’s Vivian. The evil stepmother of the “Cinderella” tale has become notably less evil over numerous iterations; in this case, Menzel crafts a character who believes that her dreams for herself were the cause of losing out on love. Cabello and Menzel have a strong chemistry and it’s a shame they don’t share more scenes together.

This is probably because “Cinderella” has to accomplish so many things, from including musical moments to hitting all the necessary beats of its fairy tale story, in one single film. We see Ella designing out of her swank basement — Billy Porter’s fairy godfather character, Fab G, can call it dingy all he wants, but you know that it would go for a mint on Zillow — and is made fun of once or twice, but there aren’t stakes to her not accomplishing what she wants. Later, Ella’s trip to the ball is inspired by getting business connections, and it’s hard not see that her being a princess would make her dreams attainable. By the third act, the entire dressmaking conceit is all but a loosely stitched feather, blowing in the narrative wind.

Still, Cannon’s take on “Cinderella” looks to be this year’s “Greatest Showman,” where the flaws in the narrative are nothing in comparison to the vibrancy and energy on display with each and every musical number, worth dancing for, maybe even in a pair of glass slippers.