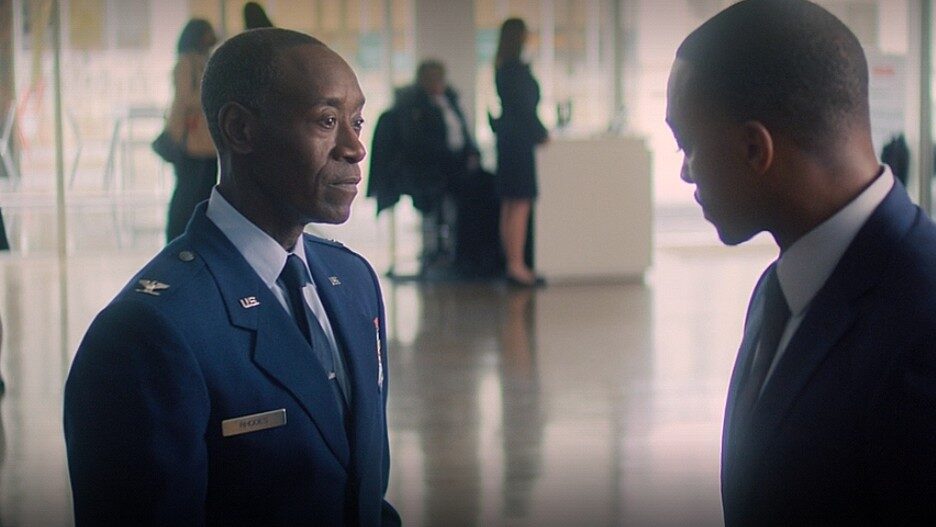 A lot of people were baffled when Don Cheadle scored an Emmy nomination for Outstanding Guest Actor in a Drama for his extremely brief appearance in Marvel’s “Falcon and the Winter Soldier” — including Don Cheadle.

Cheadle was nominated for a scene in the Disney+ show’s first episode, in which Colonel James “Rhodey” Rhodes (Cheadle) tries to convince Sam Wilson (Anthony Mackie) to keep Captain America’s shield instead of handing it over to the Smithsonian. It’s crucial in setting up Sam’s personal journey to becoming the new Captain America, but it’s alsosuper, duper short.

Literally about 3 minutes long. That’s it. Basically a cameo.

“Thanks, well wishers, sorry haters. Agreed, shruggers. I don’t really get it either. buuuuuuuuuut on we go …” Cheadle tweeted after the nomination was announced.

Cheadle is nominated alongside two guest stars on another Disney+ show, “The Mandalorian” — Carl Weathers and Timothy Olyphant, both of whom we’ll add appeared for way more than 3 minutes. Charles Dance was nominated for “The Crown,” while Courtney B.Vance was nominated for his role in “Lovecraft Country.” Check out a full list of Emmy nominees here.

We don’t know if he has a chance, but here’s hoping if Cheadle is skipped, he’ll be back next year after Disney+’s “Armor Wars,” which puts War Machine front and center, for the lead actor category. Then again, “Falcon and the Winter Soldier” star Anthony Mackie was snubbed. Maybe if he shows up for a single scene in “Armor Wars,” the TV Academy will notice him.

Of all the streaming outlets this year, HBO and HBO Max led the Emmy nomination count with 130 nominations, just one ahead of Netflix’s 129. Disney+ was the third in line with 71 nominations.

The 73rd annual Emmy Awards will be broadcast live Sept. 19.