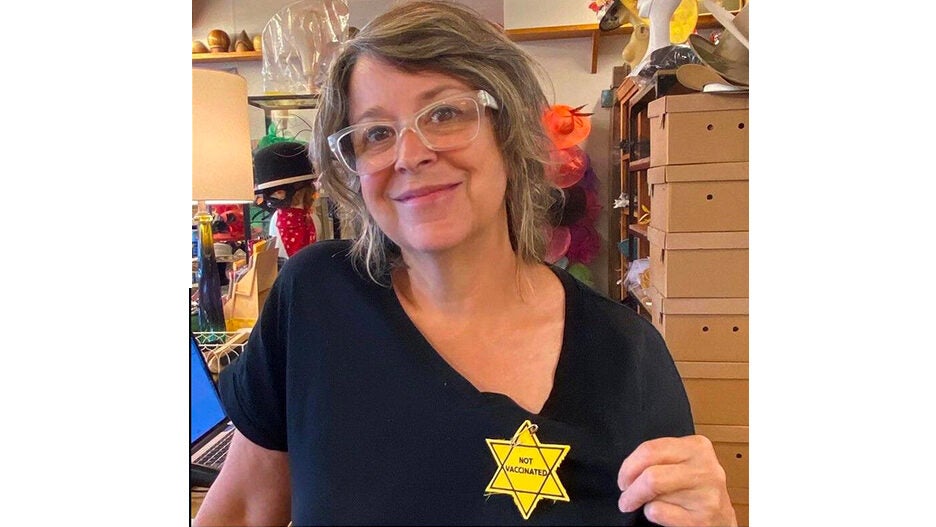 A hat store in Nashville is apologizing for selling patches depicting the Star of David with the words “not vaccinated” in the center. The apology comes after a wave of protests over the item, and the store owner’s initial defense of it, that prompted Stetson and other top brands to pull their products from the store over the “offensive” patches.

HatWRKS in Nashville drew intense backlash this week as a promotional image of the patch went viral. In the image, store owner Gigi Gaskins modeled the adhesive patch (though it was designed to appear as though it was pinned on, like those used to segregate Jews during the Holocaust).

The post has since been deleted, but originally promised that trucker hats bearing the same design would be coming to the store as well.

As criticisms mounted on Friday and Saturday, the store repeatedly defended itself. In one post, Gaskins wrote, “People are so outraged by my post? But are you outraged with the tyranny the world is experiencing? If you don’t understand what is happening, that is on you, not me.”

The store then doubled down on its decision to sell the patches, posting a second explainer detailing why exactly they believe that those who are not vaccinated are being victimized. The post criticized the need to prove vaccination, saying “At the least, all unvaccinated people will be segregated from society, marked & must wear a mask. What comes next?”

In response to the product, protesters gathered outside the store on Saturday, and multiple hat brands pull their own products from the store, including Stetson, a major Western-wear brand. The company cut all ties with HatWRKS Nashville, condemning anti-Semitism and discrimination in general.

“As a result of the offensive content and opinions shared by HatWRKS in Nashville, Stetson and our distribution partners will cease the sale of all Stetson products,” the company shared on Twitter.

According to Nashville’s Fox 17,other top hat brands like Tula Hats and Kangol Headwear also pulled their merchandise from the store.

Following the loss of Stetson and other brands, Gaskins has pulled an about-face, issuing a formal apology on Instagram.

“In NO WAY did I intend to trivialize the Star of David or disrespect what happened to millions of people,” the post reads. “That is not who I am & what I stand for. My intent was not to exploit or make a profit. My hope was to share my genuine concern & fear, and to do all that I can to make sure that nothing like that ever happens again. I sincerely apologize for any insensitivity.”