A wise woman once said, “Don’t activate me. You don’t want to see me activated.” That woman was Lindsay Hubbard and, turns out, she’s actually always activated.

“What do you mean? You don’t get anywhere in New York if you’re not activated!” the Summer House star quips to ET over video chat from new NYC apartment. “I’m ‘good activated’ right now. You’re catching me at a really good activation level.”

Lindsay is riding the high of the last few weeks, the start of season 5 of the Bravo sleeper hit, which seems to be delivering its best batch of episodes yet this year — a season shot entirely during the coronavirus pandemic. Lindsay and her housemates lived together 24/7 for six weeks straight, a first for the show. Usually, the Hamptons weekenders retreat back to Manhattan for the work week, but not this time. Instead, Lindsay spent some 60,000 minutes of time uninterrupted with eight of her friends — and one boyfriend, Stephen Traversie. While it remains to be seen if all her friendships thrived this summer, the PR professional already revealed that her relationship with her marketing executive beau did not survive the season. Lindsay is now watching back the beginning of the romance’s end along with the audience.

“Part of me feels validated, part of me goes back and is like, I could have been easier on this or that,” she confesses, seemingly referencing tense exchanges she and Stephen had in the first couple of episodes of season 5, small fights that turned into mini-meltdowns over cocktail orders and food requests. For the record, Lindsay says Stephen never made her sandwiches; it was a one-way ‘wich relationship.

“I don’t typically regret anything, I just try to learn from mistakes and move forward,” the 34-year-old adds. “I unfortunately stay in things a little bit too long.”

Lindsay is the first to admit that the relationship likely should’ve never entered Summer House — she didn’t call things off with Stephen until October — and she’s cringing at the thought of watching back their more intimate moments caught by the security cameras installed throughout the property for filming, but also says the experience was the push she needed to say goodbye to her guy.

“I was very decisive in that moment and there was no going back,” she says, “and now I’m watching why. Now I’m watching back as to why I was decisive.”

Lindsay slightly shocked viewers in the season premiere when she declared she was ready for “engagement, marriage and babies” with Stephen, revealing a handwritten “Timeline 4 Life,” which detailed the month-by-month milestones she hoped to hit. While the piece of notebook paper appeared to be a secret diary entry of Lindsay’s, she says it actually got Stephen’s stamp of approval. 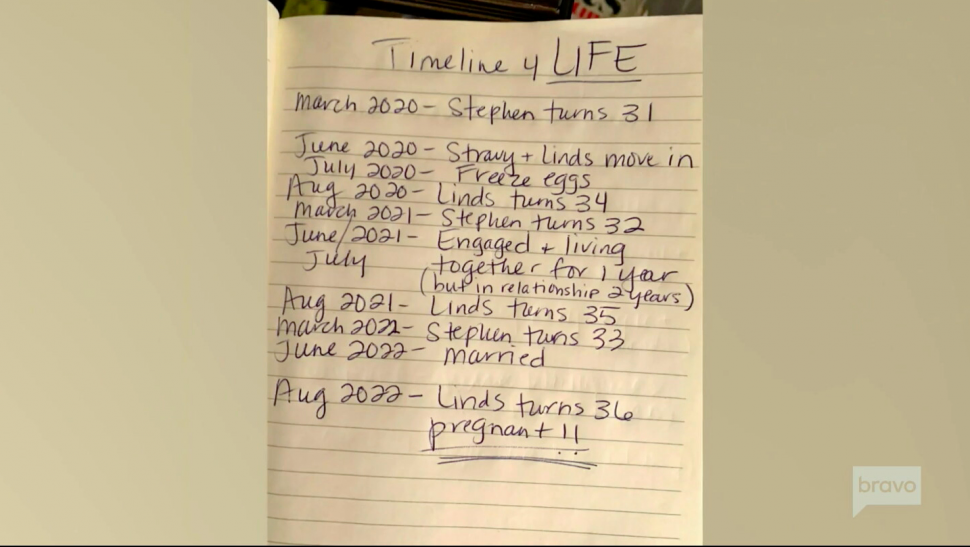 “When you think that you’re going to spend forever with someone — and I literally thought that Stephen was my forever person. I was like, oh my god, I found my guy, and that’s an exciting moment — and then you realize, you’re like, oh s**t, I didn’t find my guy,” she explains of the plan. “I had written it down and last February, about a year ago almost to the day, he randomly asked me, and I was like yeah, I actually wrote a timeline down and I reviewed it a year ago with him — last year, 2020 — and he was like, I agree. I agree with this. This is a very fair timeline for both of us.”

While most of the plan was tied to Stephen, there are a couple of items on Lindsay’s list she still plans to accomplish solo, including freezing her eggs.

“Freezing my eggs is a very important part of my investment in myself, insurance in myself,” she shares. “It has nothing to do with anybody whatsoever, and it didn’t even when I was dating someone.”

“I didn’t want to put the pressure on myself to find a guy to impregnate me with babies,” Lindsay continues. “I don’t want to settle for somebody if they’re not the right partner for me.”

Lindsay says she also now has a list of qualities she’s looking for in a partner — “It has nothing to do with looks or physical attributes, it has to do with the inner, emotional core” — but she’s keeping those traits to herself, though she did let it slip that a “secret admirer” sent her flowers for Valentine’s Day.

“Not a secret to me,” she clarifies, but again keeping the details to herself. There’s a slight chance that admirer is her Summer House co-star, Luke Gulbranson. The season 5 trailer teases a steamy hookup between the two (or at least, gossip of one) in the aftermath of Stephen storming out of the house.

“I love Luke, he is a very kind, genuine human,” Lindsay gushes. “You’re going to have to wait and see what happens between me and Lucas, but I don’t know, I love Luke. I think he’s a great guy and people don’t give him enough credit. He’s just a dumb boy sometimes.”

Luke’s “dumb boy” moves are at the center of this season’s early drama, with the house caught up in a he said/she said battle between Luke and Hannah Berner. Hannah claims they dated, Luke insists they didn’t.

“I was very much involved last season in their relationship and supported both of them very heavily, and that didn’t really work out in my favor,” Lindsay notes. “It wound up being slapped back in my face. So now I’m team ‘stay out of it.’ When I try to support, things get twisted. Rumors get blown [up] and I have a target on my back. I like to just stay out of it.”

Lindsay can’t totally stay out of it, though, because she has her own drama with Hannah… and it’s tied up with Luke. Hannah alleged Lindsay froze her out between seasons 4 and 5, and actively pushed Luke toward another cast member, Danielle Olivera, in that time. Lindsay’s defense is that Hannah was speaking ill of her on podcasts — and that Danielle went after Luke of her own volition.

“Anyone who knows me, I am a genuine, authentic, loyal, caring, take care of everyone kind of girl,” Lindsay says. “I have no ill intentions toward anyone whatsoever. I don’t twist the truth and I want the best for everyone.”

When Hannah arrived at the house on move-in day for season 5, she claimed Lindsay gave her a “very cold hello.” Lindsay says she honestly doesn’t recall the interaction, adding that any “cold” vibes weren’t premeditated. If anything, she calls her vibe “hesitant.”

“You know, I do have feelings,” she says. “I am a human and they get hurt. … I have a very sisterly relationship with Hannah, you know? I really do.”

“I need consistency,” she adds, suggesting Hannah is a fair-weather friend. “I don’t have ‘summertime friends’ and ‘wintertime friends.’ Otherwise, why are you in my life?”

While she may not have grown closer with her one-time “little sis,” Lindsay says she did bond with Hannah’s BFF, Paige DeSorbo, for the first time this season.

“I got to know Paige a lot deeper this summer,” she shares. “I was so excited because she kind of came out of her shell a little bit more and showed us a little bit more of her authentic self … and I think that’s what we all needed from her.”

Lindsay also gives her stamp of approval to new castmate Ciara Miller, Luke’s one-time girlfriend who stepped right into the Luke-Hannah web the second she set foot in the house. Lindsay says she’s “very excited” for the audience to see what Ciara brings once she frees herself from that entanglement.

“She’s very mature and has a very clear head and open mind,” Lindsay teases. “She brought this fresh energy that I think was so refreshing.”

There’s still a lot of season to see, and judging by the trailer, it’s jam-packed with highs (a “wedding” the group threw for Kyle Cooke and Amanda Batula sticks out to Lindsay) and lows, like an all-out, all-cast brawl at the front door, the details of which still remain a mystery to Lindsay. 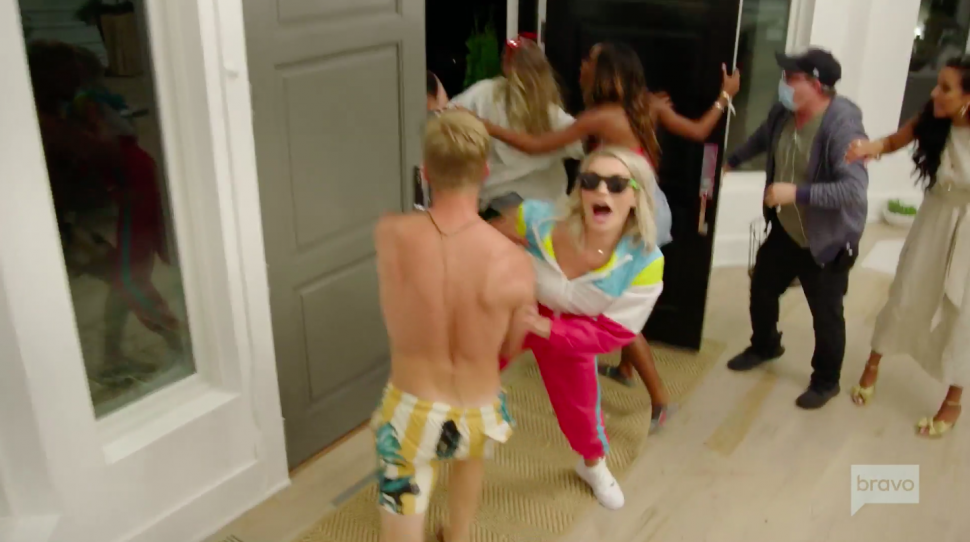 “There was blood,” she reveals. “I don’t know how there was blood. There was a lot of, you know, boys talking through the walls to each other, a lot of yelling from the upstairs to the downstairs, and I was just in my room enjoying a cocktail.”

Lindsay eventually made her way to the fight, though, jumping into action to try and stop it.

“I, like, body-slammed Kyle against the front door of our house,” she recalls. “I was just like, no, no, no, no, no! I don’t know what’s happening, but if it makes it out to the driveway, that’s when there’s more space and more room, and less opportunity to contain and control the situation. So, you know, we all just sort of launched at the guys to hold them back and I just happened to body-slam Kyle, and spider-monkey him and use my feet as leverage on the door and hold him from getting out the door. I can’t wait to see that footage alone, because I somehow became like a WWE champion.”

There will also be some verbal sparring matches. In the supertease, Lindsay tells Amanda to “stop coming at me” all the time.

“I always have a target on my back every single summer, I breathe — I breathe! — and they come at me,” Lindsay says of the exchange. “In that situation, a rumor had started and Amanda was trying to justify it and I was like, ‘Oh, come on. There’s no justifying this insane rumor…’”

“I was like, how many summers can you just possibly yell at me?” she adds. “If it’s not talking behind my back, now you’re creating a rumor? … I like to shut it down when that’s happening, especially to me. No one else is going to defend me, I might as well defend myself.”

While she sometimes gets a “mean girl” label, Lindsay says her actions paint a different picture. In fact, she says others in the house should have that reputation instead.

“Just because I’m direct and straightforward and I hold people accountable for when they do things wrong doesn’t make me mean or scary,” Lindsay notes. “I think it’s actually meaner when people talk crap about you behind your back and they’re a different way to your face.”