A review of The Falcon and the Winter Soldier finale, “One World, One People,” coming up just as soon as I save people a lot of redacting and a lot of shredding…

For its first five episodes, The Falcon and the Winter Soldier kept hovering around mediocrity. Sometimes, like Sam’s conversation with Isaiah last week, it was much better than that. At others, like those forgettable (save for Zemo) middle chapters, it was a bit worse. But the series as a whole seemed fine: less audacious than WandaVision, but a competent enough extension of the MCU to keep the franchise hovering until the Loki premiere.

With this finale, though, Falcon crashes and burns. It’s a mess in nearly every way, with even the parts that work feeling rushed and unearned, carried largely by the performers rather than the storytelling.

Watch Simu Liu, Awkwafina in Marvel's 'Shang-Chi and the Legend of the Ten Rings' Teaser

'The Falcon and the Winter Soldier' Recap: American Skin

The Beatles in India: 16 Things You Didn't Know

Start with the action, which was meant to be one of this show’s big selling points. Whatever issues there may have been with earlier set pieces, they tended to be crisply shot and edited, and thus easy to follow. Yet all of the fight scenes in the finale take place at night, and often in dark settings (some of them bathed in red light). Between that and editing that’s more frantic than in previous installments, it’s hard to keep track of the geography of any fight, along with who is winning or losing in a given moment, and why. It’s less than ideal for an episode that devotes a good chunk of its running time to an extended battle between our heroes (some of whom aren’t really heroes, but we’ll get there) and the Flag Smashers. And it’s a particular bummer for an episode that features Sam Wilson’s debut as Captain America. It should be a triumphant moment that showcases how good Sam is in the role — even if he still has some learning to do, like when he lets Batroc knock down his shield with a chair — and instead it’s a visual muddle.

But then, almost everything is muddled this time out. The writers never figured out exactly what Karli stood for, why she was behaving more recklessly of late, why Sam was so drawn to her struggle, or any of the other things necessary for the chief antagonist. The goal was clearly to make her a complicated, reasonable villain like Killmonger, but nobody put in the work to make it make emotional sense. She’s just complicated because we’re told that she is. Lather, rinse, repeat for so many other finale developments.

The penultimate episode, for instance, seemed to be setting up John Walker as either the season’s true villain, or at least a compelling secondary antagonist who makes everything worse for the good guys. Instead, he’s just… a hero again? Someone Bucky wordlessly runs off into battle with, and later banters with in the same fashion he has so often with Sam? And Walker in turn seems to have no issue whatsoever with Sam flying around in a Captain America suit(*) and carrying the real shield? How did this happen? There’s even a brief hint of the more insecure, out-of-control Walker, when Karli refers to Lemar as someone who didn’t matter, but otherwise, he might as well be Hawkeye or Quicksilver or even Zemo’s butler (sigh) running around out there helping out Bucky and Sam. His story concludes with Val giving him a black version of his costume and redubbing him U.S. Agent(**), but it’s played for light comedy, and not as if he’s the damaged, reckless embodiment of all of America’s worst instincts that he had been portrayed as in the episodes leading up to this one. He’s just a hero because the show — or, perhaps, the larger MCU apparatus — needs him to be.

(*) Getting back to the visual problems, the costume is a faithful recreation of the one Sam wore in the comics while he was Cap. But in live action, it looks nearly as goofy on him as Steve’s costume did in the first Avengers movie. It could definitely use some tweaks going forward. 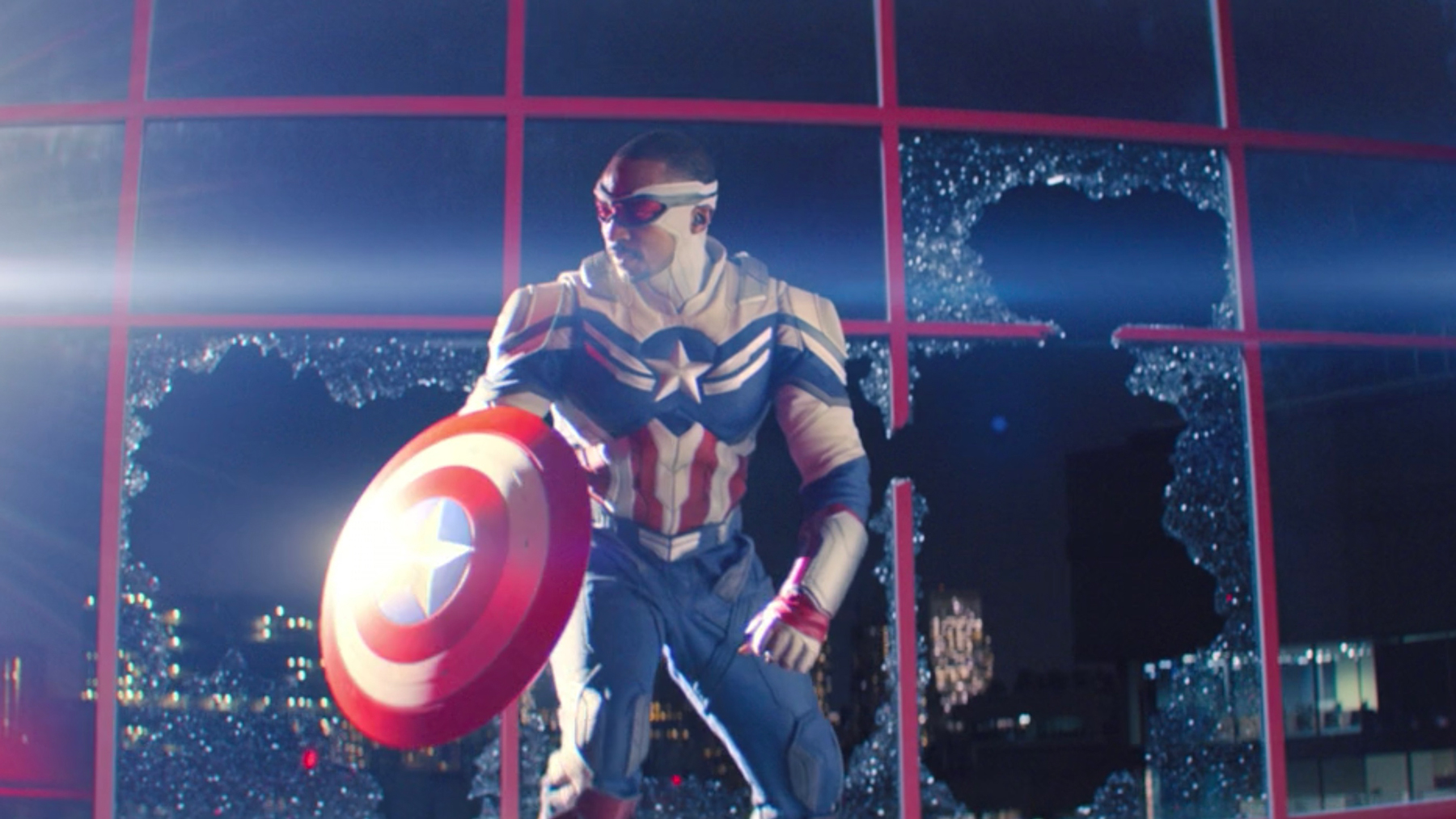 (**) Returning one last time to the Eighties comic-book story that introduced Walker: While Walker is running around as the new, government-approved Cap, Steve Rogers dons a nearly identical costume that just happens to have black as its dominant color scheme, and renames himself “The Captain.” After Walker gives up the Cap mantle, he essentially swaps outfits and shields with Steve, and joins the West Coast Avengers as the U.S. Agent. The outfit Wyatt Russell wears in his final scene looks more or less like the one Walker currently sports in the comics.

Sharon Carter, meanwhile, is revealed as the Power Broker, and is even the subject of a midcredits scene celebrating her return to the American intelligence community and all the weapons and secrets she can steal now. On the one hand, she was pretty much the only choice left. (Though Val would have made a decent late-in-the-game option.) On the other, being the only choice doesn’t make it feel like an earned twist. Sharon is a minor figure in the second and third Captain America films, and presented as unflinching in her heroism. Heck, Steve Rogers was so drawn to her innate goodness that he made out with her even though she was the niece of the love of his life. Having her turn full heel requires more effort than just a speech a few episodes back about how betrayed she felt after being branded a traitor(*). She has to be someone we understand and care about more deeply before it makes sense or matters that she’s a bad guy.

(*) In the comics, Sharon actually turns antihero for a while (at the start of Mark Waid’s great run on Captain America) after being similarly written off by America. But she never turns purely villainous. It’s also a situation where Steve had been tricked into believing for years that she was dead, so it makes sense that he would have abandoned her. Like the Blip itself (which fuels so much of what Karli cares about), Sharon’s fate post-Civil War — and what Steve could have done to help her at various points — is one of those things the movie writers clearly didn’t think through, leaving it a problem for someone else to clean up.

Sharon kills Karli to protect her true agenda, and that inspires Sam to give a long and rambling speech to the Senator (such a non-character he was never even given a name) and other members of the GRC about the evils of what they’re doing. Like Karli’s motivations, very little of what Sam is arguing is clearly articulated, outside of the parts about what it’s like to be a black man wearing the Stars and Stripes. We don’t know enough about what the GRC is doing, and what the state of the post-Blip world is like, to understand any of the nuances of what’s happening. Yes, forced relocations are probably not great, but for Sam to compare the GRC to Thanos? What?

The speech plays live around the world thanks to the news cameras present to cover the GRC hostage crisis, and it is meant to win Sam at least temporary adulation as the new Cap, not to mention the approval of Isaiah Bradley. As a way to show that he understands the fraught history of the title he now holds, Sam arranges for a statue of Isaiah and an explanatory plaque to be added to the Captain America exhibit at the Smithsonian. Carl Lumbly is extraordinary at playing Isaiah’s overwhelmed and grateful reaction to the gesture — perhaps the best thing this show accomplished was to remind people just what a great actor that guy is — but it’s a moment carried more by the performance than the script. The Isaiah we’d seen in previous installments was fundamentally broken and unforgiving of the United States government. He didn’t even want so much as a glimpse of the shield when Sam tried giving it to him last week. It would make emotional sense for him to have a mixed reaction to the Smithsonian tribute — grateful to Sam, while still being justifiably bitter about the country, Captain America, etc. — but instead it comes across as a purely healing moment that, once again, the show wanted without figuring out how to get from Point A to Point B.

At least we see the Smithsonian scene in its entirety, whereas Bucky’s apology to Yori cuts away a moment after his initial confession, and before he’s getting into all the complicated details of who he was and why he did it. Like the GRC, or Isaiah’s feelings about the country that experimented on and imprisoned him, it’s a terribly fraught and nuanced thing on which the series wants to trade emotionally without ever really confronting it. What is the point of the whole “six-hour MCU movie” approach if you’re not going to give us that whole conversation, not show Bucky having to get into all the painful details, and not show Yori responding to the truth of why this young stranger befriended him? A later scene at the sushi bar shows Yori laughing with Bucky’s onetime date Leah, which is meant to show us that the amend worked like Sam said it would. But when you devote so much of a show to the consequences of one of your hero’s actions, and then you flinch right when he’s about to face them, you send the message that you really don’t care about the consequences at all, and just consider them as window dressing for fight scenes and snappy patter.

Ultimately, The Falcon and the Winter Soldier was trying to do way more than it could comfortably handle, even at nearly three times the length of an MCU movie. Too many characters — to the point where I needed a moment to remember that the man who blew up the other Flag Smashers was Zemo’s butler — and conflicts for this creative team to explain and resolve. And, as happened with the WandaVision finale, a number of things that were raced through here seemed less about serving this show’s story than setting things up for future movies and series. (The Walker scenes in particular played as if Kevin Feige came in at the last minute and said, “Whoa, whoa, ix-nay on making him an illain-vay! We need him to be a good guy in something else!”) But WandaVision was stronger for most of its season, and its conclusion was merely underwhelming, not an utter shambles like this one.

Whatever plans the company has for our two title characters, this is technically the series finale of The Falcon and the Winter Soldier, since a title card appears at the end redubbing any future installment, whether for Disney+ or a movie, as Captain America and the Winter Soldier. Hopefully, those adventures will conclude more strongly than this did.