When Halle Berry wanted the “characters fractured and broken” for her directorial debut in “Bruised,” perhaps she didn’t mean it so literally. Berry is no stranger to on-set injuries, however, as an actor who often undertakes her own stunt work and who appears to be, well, just a little accident-prone … even in the bedroom.

Last year, Berry revealed on “The Tonight Show” that she almost choked while shooting a sex scene with Pierce Brosnan. While playing Bond girl in “Die Another Day,” Berry explained Brosnan played real-life James Bond as he performed the Heimlich maneuver on her. “I was supposed to be all sexy, and like trying to seduce him with a fig and then I end up choking on it … So not sexy.” In a separate scene, Berry also had to be rushed to a hospital in Cadiz, Spain after her eye got hit by a smoke grenade.

Other painful times include when Robert Downey Jr. unintentionally got a little too into character during 2003 horror film “Gothika.” Berry told The Movie Network that Downey “grabbed my arm the wrong way and broke it,” which cost her weeks of work, per NZ Herald. Apparently, “she didn’t think he was sorry enough” either. Ouch. Even when she’s not shooting, Berry gets a run of bad luck, breaking her foot twice in Mallorca for “Cloud Atlas.” Co-star Tom Hanks told USA Today, “She screamed an expletive louder than anyone I’ve ever heard.” We don’t blame her. So, what happened now? 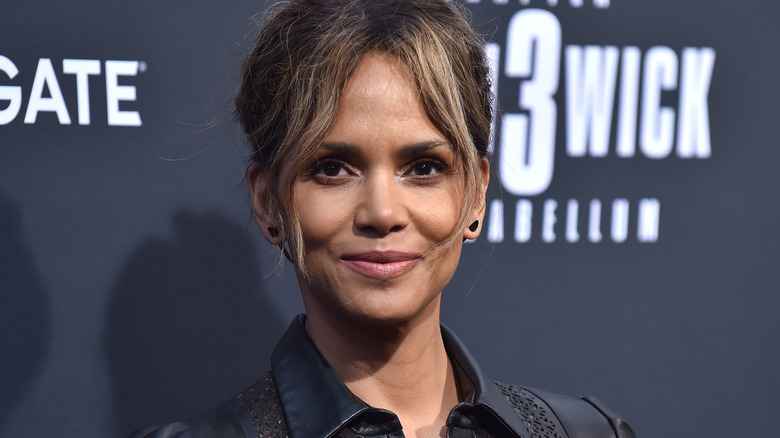 Halle Berry was a little more than “Bruised” when acting in and directing her latest film. The Oscar winner not only made her directorial debut with “Bruised,” but added another injury to the list … and a familiar one. The Netflix film about an MMA fighter’s return was originally written for Blake Lively to be directed by Nick Cassavetes, but after the pair passed, Berry, who “loved the story,” signed onto both roles, which proved to be a “challenge” early on.

During her first day of filming, Berry broke two ribs. Stunt coordinator Eric Brown told Entertainment Weekly, “[It was] kind of a crazy injury. But that was just her intensity … Halle’s a special case. I’ve worked with tons of actors, and almost none of them have that kind of work ethic.” But a determined Berry soldiered on, refusing to stop production, partly due to a case of déjà vu. She famously broke three ribs while making “John Wick: Chapter 3 – Parabellum,” recalling, “I told the director about it, they told the insurance. We had to shut down for months and it was a big ordeal. On this, because it was an independent movie, we didn’t have a big budget. The director in me said, ‘I didn’t come this far and work this hard to go home.'”

It’s likely she bounced back quickly as a celeb known for being  “physically fit and healthy” even during lockdown. Give us your motivation, Berry.