Hearties, let’s toast to the new Mr. and Mrs. Yost!

Magic was in the air on Sunday’s When Calls the Heart, as beloved characters Ned Yost and Florence Blakeley tied the knot in a stunning and heartfelt ceremony. Surrounded by their closest loved ones, the couple exchanged vows and left viewers feeling full of love and emotion.

Only ET spoke with the bride and groom, actors Loretta Walsh and Hrothgar Mathews, all about the captivating episode — and the behind-the-scenes secrets that you didn’t see on TV! 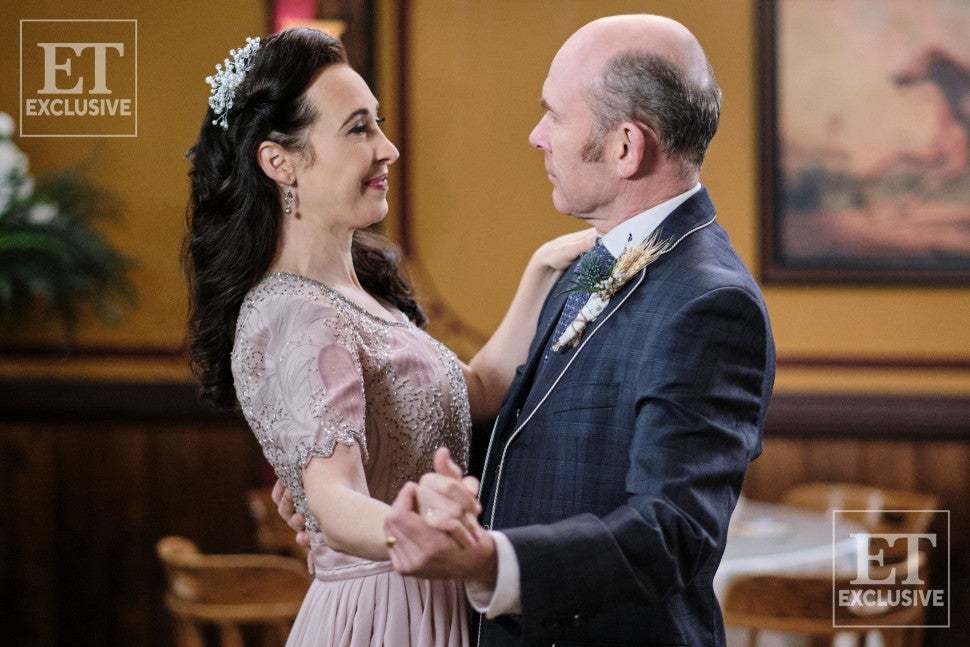 “I remember that we were originally going to shoot the wedding in front of the Mercantile,” Mathews recalls. “When Martin [Cummins] and I are putting the flowers on each other, we were in the Mercantile because we were then, originally, the way it was scripted, we were going to go out and get wed on the front stairs of the Mercantile, and it was going to be outside. Of course, weather permitting, that did not happen so we ended up getting a church wedding, which was cool as well, but it was a change, for sure.”

Walsh chimes in to speak on the excitement of that day filming on set. “I am personally married, too, and so it did start to bring back so many memories of my own wedding and my own feelings of like, ‘Oh my goodness,’ this is such a big change for these characters,'” she explains.

And when it comes to Walsh’s stunning bridal look for Florence, which included a pale pink beaded gown, romantic soft waves and a sparkly hair ornament, she pays tribute to the show’s hair, makeup and wardrobe team. “They made me truly feel like a queen on that day,” she gushes. “Even though it was make-believe, they still made me feel so special and beautiful.”

Speaking of Florence’s bridal gown, it comes with a lot of meaningful history. Hearties recall seeing the same dress in episode 4 on Florence’s best friend, Molly Sullivan, who purchased it in an effort to impress Bill Avery. But when it comes time for Florence to find the perfect wedding gown and she’s less than impressed with her options, Molly selflessly gifts the fabulous frock to the bride-to-be and totally saves the day.

“I think that Barbara [Gregusova], the wardrobe designer, had had this dress, and she was really waiting for the moment to use it. And so when the storyline with Molly came up, I think she was like, ‘I have the dress for you,’” Walsh shares. The actress adds that she and the wardrobe team initially played with the design of the dress — revealing that at one point, a large bow was attached to the back. However, Walsh says she spoke up that the bow didn’t feel authentic to Florence’s style. “I said, ‘I don’t know, I feel like with the hair, it might be just too much of a risk for Florence.’ So we ended up with what we ended up with, which was so beautiful and [the cascading draping] is actually a separate piece.”

As for Florence’s locks, Walsh explains why it had to be a ‘really big transformation.’

“She’s a very, somewhat uptight and put together, controlling character who always wears her hair up,” Walsh says. “And so for Florence, that would be a really big risk to have her hair down and flowing and so feminine. And everybody was going to look at her, which I think was quite confronting for her as well… And the hair piece that ended up in Florence’s hair, we absolutely collaborated on what that would be. And it was a really fun experience.” 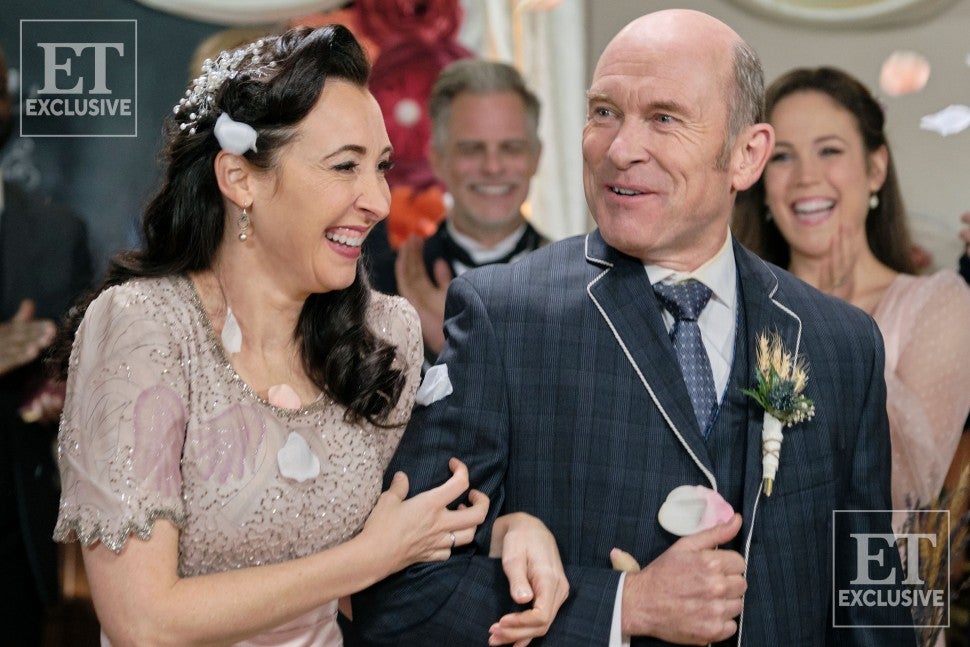 To exchange vows with Florence, Ned opted to wear a dark suit and tie — but Mathews insists he wasn’t involved in any aesthetic decisions. “They just told me what to put on, and I wore what they told me to wear, which is classic Ned,” he says with a laugh.

While the FloYo wedding was full of memorable moments, there were also several meaningful exchanges that occurred prior to the actual nuptials. For instance, Ned breaks tradition and goes to see Florence hours before their wedding to calm his nerves and gain some reassurance. After their conversation, the bride suggests they share their first kiss at that very moment so they can enjoy some privacy. Although the couple is very social around town, Mathews says that they’re still “private in lots of ways, too.”

He adds, “I asked, actually asked Loretta, ‘Hey, listen, do you want to try this kiss, you and I somewhere?’ and she was like, ‘No, no, no, I want to do it on the day, live, in front of the crew.’ So it’s funny because it’s a bit of life imitating art there, because I thought maybe we could try it, honestly, just as a professional thing, but it was kind of cool just to go for it in the moment there.”

As for why Walsh turned down Mathews’ request to rehearse ahead of time? “There’s a part of me that just really wants to create magic,” she says with a smile. “It is Florence and Ned’s first kiss and there’s such a sort of innocence to these two characters trying to navigate their way through this new and second chance at love, which is really endearing. Let’s make it Loretta and Hrothgar’s first time too and see if that adds any special secret pixie dust, to make it extra, extra real.”

Another moment that may have had hearties shedding a tear or two came courtesy of Florence and Molly, who shared a warm embrace ahead of the wedding. Florence tells Molly how much her friendship truly means to her, and for Walsh, she says getting through the scene was an emotional challenge.

In fact, the scene is so meaningful to Walsh that she says it’s her favorite of the entire episode. “That scene between Molly and Florence is, that’s actually the reason why I really wanted to do When Calls the Heart, because I wanted to do a show that celebrated the sisterhood of true friendship between women who support each other and who love each other, and who are right there and know their best friends so, so well,” she marvels. And not only is Florence grateful for Molly, but Walsh says she’s equally as indebted to her close friend, Johannah Newmarch, who plays Molly.

“Johannah’s a brilliant and wonderful and really present scene person to work with and a real-life friend, which just made it extra special,” Walsh gushes. While filming the scene, Walsh says the line between fiction and reality was completely blurred, explaining, “That’s absolutely Loretta talking to Johannah and also Loretta talking to all the women of the world, to say, ‘Love your best friend and appreciate your best friend.’ And, oh my goodness, isn’t it wonderful to have friends like this?”

Proving once again how life can imitate art, Walsh goes on to tell a story of how Florence’s wedding dress was nearly destroyed on-set — but thankfully, once again, Johannah came to the rescue.

“When we went for lunch, the transport that was taking us back to where we were going to eat, when we opened the door of the van, my wedding dress was stuck in the door. And I think Johannah and I had a full bride and bride’s best friend moment. Like, ‘Oh my goodness, this is a crisis. This is a crisis. We need to fix it. We need to fix this right now!’ she recalls of the panicked moment. “And honestly, Johannah, in true form, she fixed it. She was like, ‘Don’t leave. Don’t leave. She’s stuck in the door,’ and she helped me get that dress out of the sliding door and away we went.” Talk about a true friendship, on and off screen! 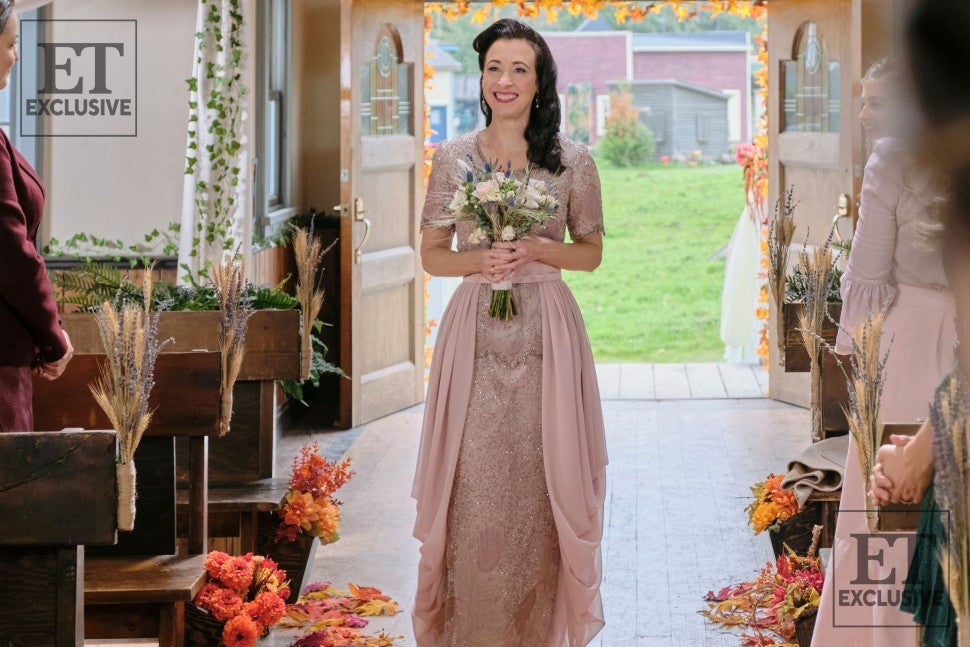 As for the heartwarming wedding ceremony, which took place in the town’s impeccably decorated church, Mathews says he gets “choked up” thinking about how special that day was. Specifically, watching his pal, Walsh, walk down the aisle toward the altar.

“It’s a strange thing, because you’re acting, but those moments have a realism to them, and when a beautiful bride walks down the aisle, I have trouble containing myself,” he says with a smile. “So, if there were tears in my eyes, it was for real. Yeah, it’s a beautiful, lovely moment, and so it’s actually a lovely, lovely thing to get to experience as an actor because it’s so profound in some way.”

While many fans anticipated Florence’s son, Paul, to escort her down the aisle, Walsh confirms that idea was initially part of the conversation. However, she explains why the producers ultimately decided to let Florence have the moment to herself.

“Florence has really been on this sense of empowerment throughout this episode, feeling really insecure and unable to figure out why she’s being so fussy and persnickety about everything, and it’s really because she’s been searching for that one thing that nobody can do for her but herself, which is self-compassion and self-love,” she reflects. “I really just felt like her walking down the aisle is a good manifestation of that because she’s saying, ‘I’m going to let my light shine. Here I am,’ and I hope that our audience, I hope the hearties got that and cheered for Florence as that was happening, and I hope that they will let their light shine too.”

And although Florence and Ned didn’t exchange personal vows, and instead opted to let co-officiants Bill and Joseph take the lead, Walsh and Mathews still wanted to share some sweet sentiments about one another with ET.

Walsh reciprocates similar sentiments, explaining, “Hrothgar knows this, but I can never say it enough. I think that you are an incredible talent, a wonderful collaborator and I’m so privileged to get to work with you and also get to know you and call you a friend. And man, I hope that we get to have these fun times for many more seasons to come. I really do. You’re a blessing in my life.”

Now that Florence and Ned are officially Mr. and Mrs, the actors are looking forward to their future as an on-screen married couple. “I think there’s so many places that they can go,” Walsh reveals. “I would love to see some more of their children and their personal life and what it’s like having two families join together and see what kind of dynamics are there. I would love to see the Yosts use their position in Hope Valley to help the community, however that shows up, and I think that Florence and Ned, even though they’ve known each other for a really long time, I think they’re probably going to discover some things about each other that they didn’t know. And I think that could be a real recipe for trouble, or comedy,” Walsh says, smiling. Mathews adds, simply, “I’m just excited to see where we go from here. I’m just happy to be here.”

Cheers to the newlyweds!

When Calls the Heart airs Sundays at 9 p.m. ET/PT on Hallmark Channel.