Alain Ducasse, the cook with the most Michelin stars in the world, is to step down from the Parisian three-starred restaurant at the Plaza Athenee hotel he has run for 21 years in what critics have dubbed an earthquake in French gastronomy.

While the chef and hotel said his departure from the upscale eatery off the Champs-Elysees was “by mutual consent”, one well-placed culinary insider called it a “slap in the face” for France’s most famous living chef. 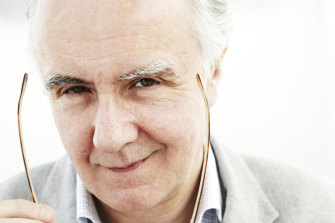 French super chef Alain Ducasse has been awarded more Michelin stars than any other chef.

In an ironic twist for the cook, the announcement dropped a day before France reopens its restaurant terraces after six months of COVID lockdown.

Ducasse, 64, who has notched up 21 Michelin stars in his career, famously chose the Plaza Athenee six years ago to launch his groundbreaking approach to cuisine, which eschews two staples of French cooking: meat and butter.

In a joint press release, the cook and hotel said his role as “consultant” would cease as of June 30.

“The three stars obtained around ‘naturalite’ (naturalness) at Alain Ducasse au Plaza Athenee, and its cuisine respectful of the resources of our planet will have marked the history of high gastronomy and that of this great Parisian Palace,” said François Delahaye, Chief Operating Officer at Dorchester Collection.

Ducasse will nevertheless continue his collaboration with the group at the two-starred restaurant Le Meurice Alain Ducasse in Paris as well as at the three-starred Alain Ducasse at The Dorchester in London. 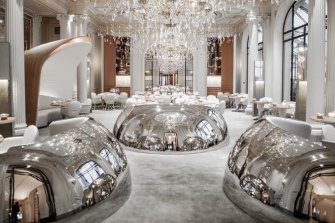 No further details were provided as to the chef’s departure. Mr Ducasse’s entourage declined to comment further.

However, Franck Pinay-Rabaroust, editor of the specialist culinary website Atabula, said: “To be ousted from one of the best restaurants in the world is a symbolic slap in the face. For French haute gastronomy, it is an earthquake.”

Alain Ducasse had worked as culinary ‘consultant’ at the Plaza Athenee restaurant for 21 years.

The loss comes two years after Ducasse suffered another blow after being ousted from the Jules Verne, a two-starred restaurant he had been running on the second floor of the Eiffel Tower for the past 10 years. French president Emmanuel Macron had chosen the eatery to host fast-food-loving ex-US president Donald Trump and their respective spouses for a Bastille Day dinner. 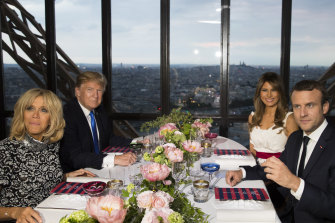 Emmanuel macron and his wife Brigitte hosted the Trumps at a dinner at the Alain Ducasse restaurant in the Eiffel Tower in 2017. Credit:AP

“What’s even more grating for him is that it appears he is to be replaced by French Top Chef winner Jean Imbert, cook to the stars who last year opened a street food restaurant with his friend Farrell Williams in Saint-Tropez. We’re going from a cuisine that summed up French excellence to bistro-style ‘cool food’.”

Pinay-Rabaroust alleged that the Gallic super chef was simply too expensive given the current economic climate in the wake of COVID lockdown and a lack of foreign tourists and hotel bookings.

“According to my sources, he took a 20 per cent cut of restaurant revenues from (the Plaza and Meurice hotels), which came to around a million euros a year. It had become a financial black hole.”

Mr Ducasse championed lighter, vegetarian-style cuisine at the restaurant as part of a greener, more ethical approach to cuisine. Dishes included black rice cooked in the oven with shellfish, calamari and octopus; Mediterranean monkfish mixed with bulgar and quinoa with shellfish.

However, simplicity and “naturalness” didn’t come cheap as a meal cost up to €400 a head ($630) excluding drinks.

The chef runs high-end chocolate boutiques, opened a cooking school last year and helms a plethora of restaurants but not all his cuisine is expensive. During the lockdown, he sold his ‘natural’ menus at the knockdown takeaway price of €22.

And he has no intention of resting on his laurels. Among his projects is a plan to launch a street food concept in Paris called Sapid in a refectory in eastern Paris in September.