A massive low-pressure trough is sweeping across Australia’s south-east, bringing with it large hailstones, damaging winds, severe storms and heavy rainfall to Victoria.

A cloud band and cold front bore down over South Australia on Wednesday and Thursday, with severe storms and reports of large hail in Adelaide. 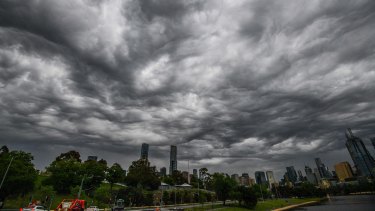 Severe weather conditions are expected to persist in Victoria through to Friday. Credit:Joe Armao

The system shifted to southwest Victoria on Thursday, and the Bureau of Meteorology reported top wind gusts of 89km/h at Longerenong in the state’s Wimmera region on Thursday afternoon.

A warning for severe thunderstorms remained in place for much of Victoria’s west on Thursday afternoon and the bureau warned of damaging winds and large hailstones in the west of the state on Thursday evening.

“An actual low-pressure system is developing on that trough and deepening over the course of [Thursday night] or later [on Thursday],” senior bureau forecaster Christie Johnson said.

“At the moment, obviously we’ve got severe thunderstorms over the west of the state, and the most likely severe phenomenon with those are damaging wind gusts and large hail.”

Ms Johnson said, unlike other storms, this weather system was tapping into moisture from the tropics.

“It’s actually bringing down tropical air in the northerly winds ahead of it; that increased moisture means it feels quite humid ahead of the trough, so people might be noticing that, but that is also adding to the instability, so that’s why we’re getting some of these big storms, which are perhaps more like the sort of storms we might get over Queensland,” she said.

A separate severe weather warning for damaging winds applied across much of the state.

The bureau warned a low-pressure system was set to intensify over southwestern Victoria on Thursday afternoon, resulting in a “vigorous” northwest to westerly flow across the state before it contracted to the state’s south-east throughout Friday.

Winds were expected to average between 60km/h and 70km/h, with peak gusts of between 90km/h and 100km/h in the west late on Thursday evening.

The damaging winds were forecast to extend east into Victoria’s southern and alpine regions in the early hours of Friday, with peak wind gusts of up to 120km/h expected over the eastern ranges.

“That’s going to be more into [Thursday] evening, we’ll see the winds picking up as that low deepens … over a broader area [on Thursday evening] in the west and then as the low tracks across southwestern, those strong winds will extend across central and eastern parts in the early hours of [Friday],” Ms Johnson said.

Winds were expected to ease off over the state’s western districts by sunrise on Friday, and, in central and eastern parts of the state, by Friday afternoon. The low-pressure was then going to track down through southwestern Victoria, across the Bass Strait and down to Tasmania’s south-east.

Ms Johnson said that while there would be showers in the south on Friday afternoon and Saturday morning that would ease by later on Saturday.

For Sunday, forecasters expected a morning shower on the coast, and mostly fine and sunny weather conditions after that.

Get a daily update on the climate summit that will shape our future. Sign up to our Clear Air newsletter here.