The RSPCA has charged a man with animal cruelty and accused him of kicking a dog during a protest outside the head office of Victoria’s construction union.

A 41-year-old man faces being jailed for up to one year or fined up to $45,000 if found guilty of committing an act of cruelty on an animal following the September 20 incident in central Melbourne.

RSPCA Victoria said on Thursday it charged the man after video footage emerged of him confronting another man, who had hold of the dog’s lead, during the angry scenes outside the CFMEU’s Elizabeth Street office.

The footage shows the dog being kicked but landing on its feet. It is not known whether the dog was injured.

The incident came amid a day of violence in Melbourne, when protesters clashed with police and CFMEU staff over the state government’s introduction of mandatory COVID-19 vaccinations in the building and construction industry, and a ban on tea room gatherings.

The protests came hours before the industry was shut down for two weeks, following multiple outbreaks at building and construction sites and non-compliance with COVID-19 rules in the industry. 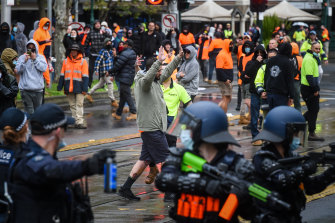 “Many concerned Victorians reported the incident both to Victoria Police and to RSPCA Victoria’s inspectorate, which is authorised to enforce Victoria’s animal cruelty legislation,” Mr Stagg said.

The man is set to face court in December.