I visited our local op shop a day after heavy rains. The roof had leaked and volunteers were busy moving things to what you might call higher ground, meaning putting small items on top of larger ones. The priority was the mattresses that were stacked not far from the lake that had formed on the carpet. I helped for a few minutes and the manager told me that the mattresses were among the most important things they sold.

“Everyone needs somewhere to sleep,” she said.

They ended up in front of a stand of gaudy Christmas decorations that were on display, shedding glitter through the gloom. “We don’t want to break anything,” I ventured.

I always thought that angels were the ones who looked after us. I can recall a time I was in hospital. On the night after my surgery, I fell over on my way to the bathroom. A nurse, whose name I never discovered, appeared from nowhere. It wasn’t just that they were professional and saved me from embarrassment. It was that they spoke in a way that restored my peace and dignity. By daybreak they had finished work and I never saw them again.

That is my image of an angel; the person whose presence is beautiful and real but also beyond our grasp. Our community is slowly coming to appreciate the importance of such people. 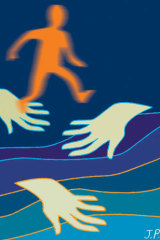 Sometimes you find angels at the top of a Christmas tree. All trees are Christmas trees, except the plastic ones that come in boxes. Around every growing tree you can find the perfect gift for difficult people: oxygen, hospitality to other creatures, a strong sense of place and purpose, fresh buds. I feel sorry for the ones that get cut down every year, though I am as complicit in this as anyone, reminding myself that at least the purchase helps the local scouts. An angel usually ends up on top.

The biblical Christmas stories include a few angels. One speaks to Mary, the mother of Jesus. Others appear to the shepherds in the fields, folk on the bottom of any social ladder. These are grassroots angels. They reach out to the poor and marginalised who are likely to understand. They enable people to say “yes” to the adventure of life and the transformation of faith.

Perhaps this year, the angel should go at the bottom of the tree. That’s where they prefer to hang out, close to where the light shines in darkness.

Michael McGirr works for Caritas Australia. His new book is Ideas to Save Your Life (Text).