London: Faced with ever-changing travel restrictions, any teenager would be forgiven for putting plans for a round-the-world trip on hold.

One youngster, however, took the idea one step further – she decided to fly herself.

Undeterred by the COVID pandemic, Belgian-British teenager Zara Rutherford set off in her one-seater Shark Ultralight plane in August last year, with her sights set on becoming the youngest woman in the world to fly around the world solo. 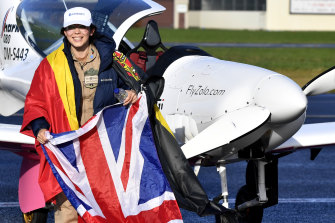 After 260 hours of flying, the 19-year-old achieved her goal on Thursday (Friday AEDT) as she touched down at a small airfield in Flanders, flanked by the Belgian equivalent of the Red Arrows.

Greeted by her family and well-wishers at Belgium’s Kortrijk-Wevelgem airport, Rutherford wrapped herself in British and Belgian flags and told reporters: “It’s just really crazy, I haven’t quite processed it.” 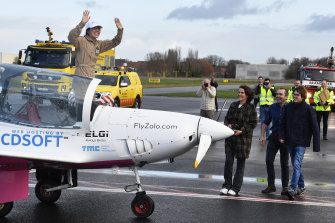 The 19-year-old Belgium-British pilot Zara Rutherford sets a world record as the youngest woman to fly solo around the world 155 days after her departure from Belgium.Credit:AP

The record had been previously held by American Shaesta Waiz, originally from Afghanistan, who was 30 at the time of her feat in 2017.

Although there were many hair-raising moments for the teenager during the 50,000-kilometre odyssey, it was the sub-zero temperatures of the Russian winter which proved the scariest.

“I’d be going hundreds and hundreds of kilometres without seeing anything human – no electricity cables, no roads, no people – and I thought ‘if the engine stopped now I’d have a really big problem’,” she said.

When she landed in the port town of Magadan in north-eastern Siberia, a local mechanic had to block some air intakes on her aircraft to keep the engine warm. 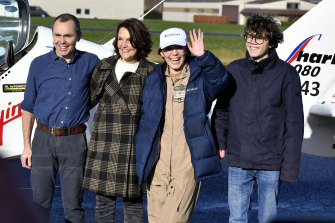 Belgium-British teenage pilot Zara Rutherford, centre, poses with her family after landing her Shark ultralight plane in Kortrijk, in the greater Flanders region of Belgium.Credit:AP

Despite the tweaks to the 325kg single-propeller plane, Rutherford was grounded in the town for several days, before spending another three weeks in the village of Ayan near the Sea of Okhotsk as she waited for bad weather to pass. She was forced to rely on the goodwill of locals for supplies, whom she said were “very willing to help”.

Other dangers faced by the young pilot during her journey included an earthquake in Veracruz, Mexico, which shook her sixth-floor hotel room, as well as tackling thunderstorms in Singapore and navigating her way through bushfire smoke in California and smog over Delhi. 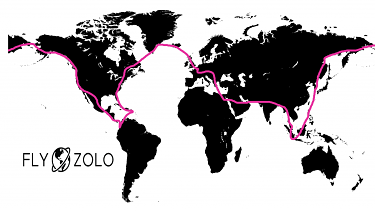 The route had taken her through the UK, Iceland, Greenland, Canada, the US and Central and South America to Colombia, then back via Alaska to Russia, China, Indonesia, India and the Middle East before ending in Belgium.

When asked what she was most looking forward to, Rutherford, who became “obsessed” with flying from the age of eight, said: “Seeing my cats”.

“Growing up I didn’t see many other female pilots so right now I am trying to be a friendly face for other girls who want to fly or study Stem subjects,” she added.

Not content with her landmark achievement, Rutherford has also set her sights on becoming an astronaut and is planning to study computer science at university next September.

“I am looking forward to speaking to people about my experiences, to encourage people to do something crazy with their lives.”