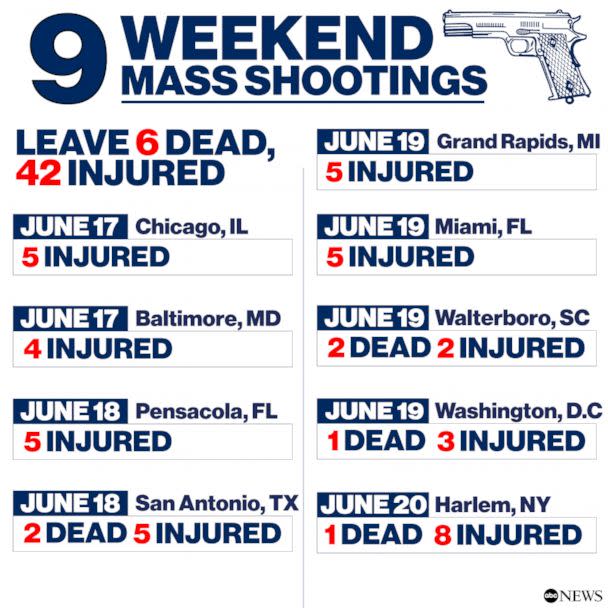 A family barbecue, a park gathering and a nightclub were among the settings for at least nine mass shootings that broke out across the country between Friday and early Monday, marking the fourth consecutive weekend U.S. law enforcement officers have responded to multiple incidents, each involving four or more victims shot.

The shootings this weekend have left at least six people dead and 42 injured in nine cities, according to the Gun Violence Archive, a site that tracks shootings across the country. The website defines a mass shooting as a single incident involving four or more victims, which differs from the FBI’s definition as a single incident in which four or more people, not including the suspect, are killed.

The string of consecutive weekend mass-casualty incidents began over the Memorial Day holiday, when at least 17 shootings left a total of 13 dead and 79 injured in cities across the country. The three-day holiday was followed by a weekend that saw at least 11 mass-casualty shootings that left 17 dead and 62 injured across the nation.

The string of deadly weekends comes in the wake of a May 14 mass shooting at a Buffalo, New York, supermarket that left 10 people dead and three wounded and the May 24 massacre at Robb Elementary School in Uvalde, Texas, that left 19 students and two teachers dead.

As of Monday, there have been 277 mass shootings in the U.S. this year, according to Gun Violence Archive.

Gunfire erupted early Monday at a park in the East Harlem neighborhood of New York City, where police said a group of people were having a barbecue when multiple shooters opened fire.

A 21-year-old man — identified as Darius Lee, a former New York high school basketball standout and college player — was fatally shot, according to ABC New York station WABC. The New York Police Department said six additional men and two women suffered non-life-threatening wounds in the barrage of gunfire that broke out along the city’s East River at about 12:35 a.m. 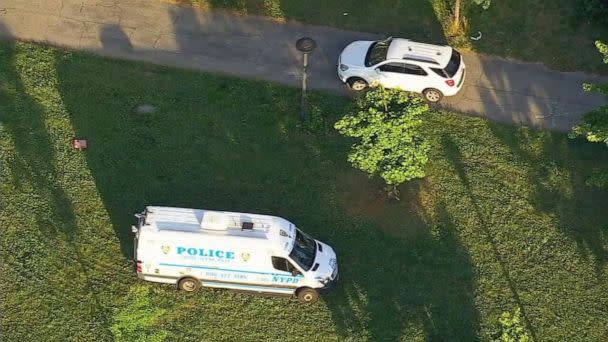 Authorities believe multiple guns were used in the shooting based on the shell casings homicide detectives found at the scene. Police said one handgun was also recovered from the scene.

No arrests were immediately announced and a motive remains under investigation, although authorities said they suspect the shooting was gang-related.

Lee was a member of the Houston Baptist University basketball team. 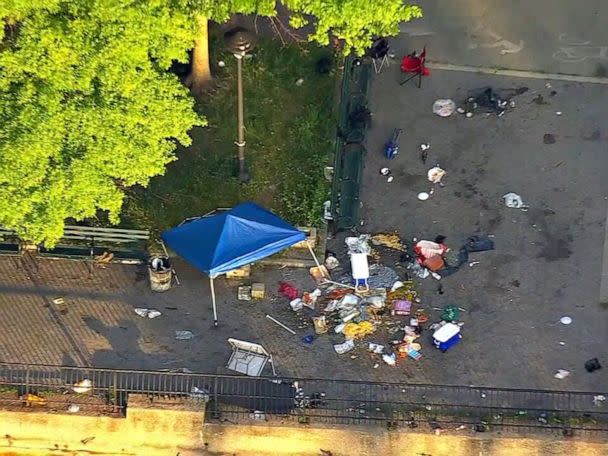 “The loss of anyone in the HBU family is a cause for grief, but it’s especially painful when we see the death of a student, particularly when so much promise is cut off in such a violent, senseless way. We offer our prayers for Darius’s family and closest friends,” HBU President Robert B. Sloan wrote in a post on Twitter.

A 15-year-old boy was fatally shot and three adults, including a police officer, were injured in a shooting in Washington, D.C., Sunday night, officials said.

The shooting unfolded in the Cardozo neighborhood of downtown Washington, D.C. — a popular area filled with stores, restaurants and bars. 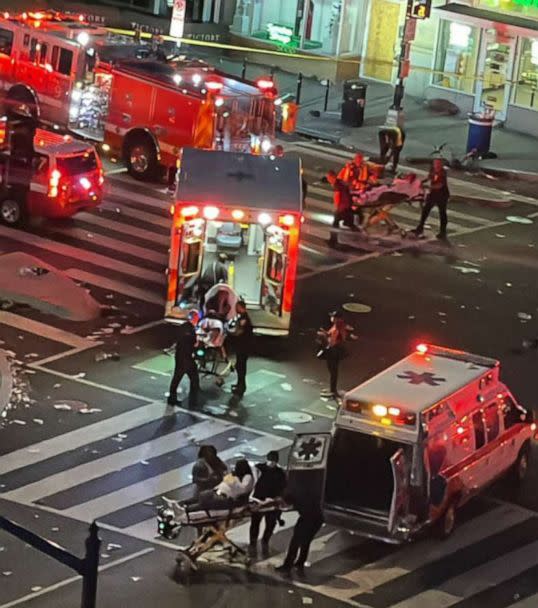 Metropolitan Police Chief Robert Contee said at a news conference that the shooting erupted after police officers responded to the area to break up a fight and disperse a crowd of several hundred people gathered at what he said was an “unpermitted” Juneteenth event and music festival called “Moechella.” He said prior to the shooting, a panicked crowd began to scatter and several people were trampled. 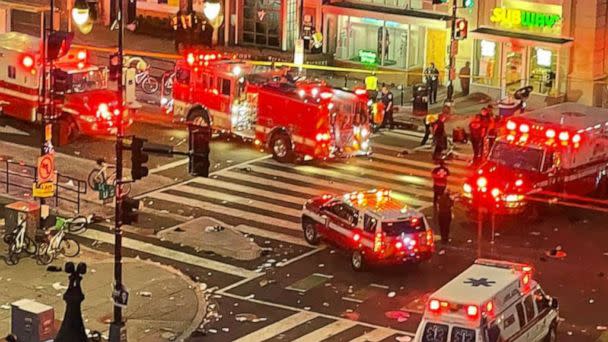 The name of the teenager who was killed was not immediately released.

No arrests were announced. Police said one handgun was recovered at the scene.

Two men were killed and two other people were injured when a shooting occurred early Sunday at a nightclub in Walterboro, South Carolina, police said.

The shooting broke out about 2:40 a.m. at the High Time Night Club, according to the Colleton County Sheriff’s Office.

“Arriving deputies secured the scene and began rendering aid to the two male victims suffering from critical gunshot wounds,” the sheriff’s office said in a statement.

The mortally wounded men were taken to Colleton Medical Center in Walterboro, where they were both pronounced dead, according to the sheriff’s office.

MORE: At least 10 dead, 42 injured as wave of weekend mass shootings in US continues

Two other victims who suffered non-life-threatening injuries arrived at the hospital in private vehicles, authorities said.

The names of the men killed were not immediately released.

A motive for the shooting is under investigation and no arrests have been announced.

Five people were shot and wounded early Sunday when the car they were riding in on a highway in Miami was fired at by occupants of another vehicle, according to the Miami Police Department.

Police said six people were traveling on U.S. Route 1 at about 2:30 a.m. in a four-door Nissan Altima when a vehicle pulled up alongside them and gunfire rang out, police said.

Five of the six people in the Nissan suffered gunshot wounds, police said. The victims, two males and four females, ranged in age from 16 and 22, police said.

Police said a motive for the shooting remains under investigation and no arrests have been announced.

At least five people were injured early Sunday when a shooting erupted at an intersection in Grand Rapids, Michigan, police said.

The shooting happened around 2:45 a.m. and police found multiple shell casings in the area and several cars struck by bullets, Jennifer Kalczuk, a spokesperson for the Grand Rapids Police Department, told ABC News on Monday.

MORE: At least 17 killed, 62 injured in mass shootings across the US over weekend

No suspects have been arrested and a motive is under investigation.

Two men were killed and five other people were wounded Saturday night in San Antonio, Texas, when a car drove by and at least one occupant opened fire on a group of people gathered outside a home for a family barbecue, police said.

The drive-by shooting unfolded at about 10 p.m.

San Antonio Police Chief William McManus said at a news conference that 20 to 30 shots were fired in the attack.

He said the injured victims, including two women, ranged in age from 20 to mid-40s.

“A family was barbecuing out front of the house. People drove by and unloaded on them,” McManus said.

McManus said at the time of the shooting, six children were inside of the house and avoided injury.

He said police had responded to the same home in May when another drive-by shooting occurred there.

No arrests have been announced and a motive remains under investigation.

4 people, including a woman driving by, shot in Baltimore

Four people were injured Saturday night when a gunman walked up to them on a street and opened fire, police said.

MORE: America has a gun violence problem. What do we do about it?

The shooting happened around 11 p.m. in the Harlem Park neighborhood of West Baltimore, according to police.

One of the shooting victims was a 21-year-old woman who was driving by when gunfire erupted, police said.

The victims, who range in age from 21 to 50, were all treated at hospitals for non-life-threatening injuries, police said.

No arrests have been announced.

Five people were injured when a shooting occurred at a downtown Pensacola, Florida, bar early Saturday.

The shooting erupted around 12:30 a.m. at The Pelican’s Nest bar.

“It is believed the shooting was a targeted incident, and there is no safety concerns toward the public,” the Pensacola Police Department said in a statement.

Officers responded to the bar and found three people suffering from gunshot wounds in the parking lot, police said. Two other shooting victims, a man and a woman, later showed up at the hospital in private vehicles.

A handgun was found by police inside the bar, but it was unclear if it was used in the shooting.

Police suspect one gunman was involved but no arrests have been made and a motive is under investigation.

Five people were injured in a shooting that occurred in a parking lot in Chicago, police said.

It was the fourth straight weekend that Chicago police have responded to a mass-casualty shooting involving four or more victims.

The episode occurred around 11:45 p.m. in the Lake Meadows neighborhood on Chicago’s Southside. The victims ranged in age from 18 to 27 and all suffered non-life-threatening injuries, including one man who was shot in the chin, police said.

No arrests have been announced.

The mass-casualty shooting came amid a violent weekend in Chicago. The Chicago Police Department reported that a total of 39 people were shot in the city over the weekend, four fatally, according to ABC Chicago station WLS-TV.

At least 6 dead, 42 injured in weekend mass shootings across US originally appeared on abcnews.go.com