You might recall that in the aftermath of the Morrison government’s second pandemic budget last week NSW Premier Gladys Berejiklian said she was “more ambitious” than her federal counterparts when it came to the re-opening of international borders.

The federal budget assumes that borders will remain closed until mid-2022. 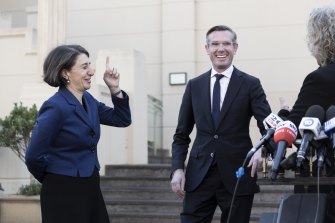 Having a whale of a time. NSW Premier Gladys Berejiklian and Treasurer Dominic Perrottet.Credit:Brook Mitchell

“A vaccine target that we can work towards will give business and community confidence that we will not be closed off to the world indefinitely,” Mr Perrottet told the Herald.

But Prime Minister Scott Morrison said on Sunday the country could not use vaccinations alone as a reason for reopening its borders.

“Even in that circumstance, you’re still talking about millions of Australians who wouldn’t have been vaccinated because a, they’re children, or b, they’ve chosen not to be,” Mr Morrison said.

UN Secretary-General Antonio Guterres told the UN Security Council on Sunday that the Israel-Palestine hostilities, which have escalated dramatically over the past week, were “utterly appalling” and called for an immediate ceasefire.

Opening the 15-member council’s first public meeting on the conflict, Guterres said the United Nations was actively working towards a ceasefire and called on both sides to allow mediation talks. 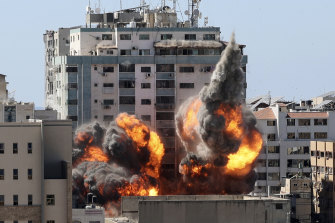 A ball of fire erupts from a media building in Gaza City after an Israeli airstrike.Credit:AP

But Israeli Prime Minister Benjamin Netanyahu said on Sunday that Israeli air strikes on Gaza City, which started on May 14, were continuing at “full force”. At least 42 people were killed on Sunday, medics said.

Peter Greste, founding director and spokesman for the Alliance for Journalists’ Freedom, writes that “on Saturday, an Israeli air strike destroyed an 11-storey apartment building used by local and international media companies, including the Associated Press news agency and Al Jazeera, my former employer”.

“It followed similar strikes on Tuesday and Wednesday targeting high-rise residential buildings that foreign and local journalists also used as offices,” he says.

Welcome to our live coverage of the day’s events

Good morning and welcome to our live coverage of the day’s events. I’m Michaela Whitbourn and I’ll be keeping you informed of this morning’s need-to-know news and analysis.

Here’s what has happened overnight: 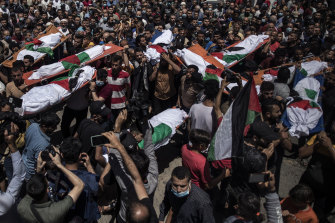 Palestinians attend the funeral of two women and eight children of the Abu Hatab family in Gaza City, who were killed by an Israeli air strike, on Saturday.Credit:AP