Why are thousands of our wild birds dropping dead? As an avian flu outbreak wreaks havoc across the UK and sparks increasing concern from the Government, GEOFFREY LEAN asks what will happen next and does the disease pose a threat to human health

Huge expanses of bare rock have appeared along normally thronged stretches of British coastline, emptied by the death of thousands of birds.

Feathered carcasses litter beaches on islands off Scotland and the east coast. And, in Brighton, seagulls have been dropping dead out of the skies.

A total of 23 Scottish islands have been closed to visitors. Precious wildlife reserves, including one named after Sir David Attenborough in Nottinghamshire, have been devastated. And dozens of pheasant and partridge shoots have been called off before the season has started.

It is all down to an outbreak of avian flu among our wild birds that some experts say is the deadliest variant so far recorded not just in Britain, but worldwide.

The Royal Society for the Protection of Birds has called it ‘heartbreaking’ while the National Trust says the mass deaths risk ‘undoing decades of hard work to restore nature’.

And the Government is increasingly concerned that the bird flu, as it is more commonly known, may mutate and cause another pandemic in humans — perhaps one far more deadly than Covid-19.

After all, that is what happened with so-called Spanish flu at end of World War I. It was caused by a similar strain of the virus to that now in circulation among birds (H5N1) and although estimates vary greatly, the former is thought to have killed 50 million people — about one in every 35 of those alive at the time. 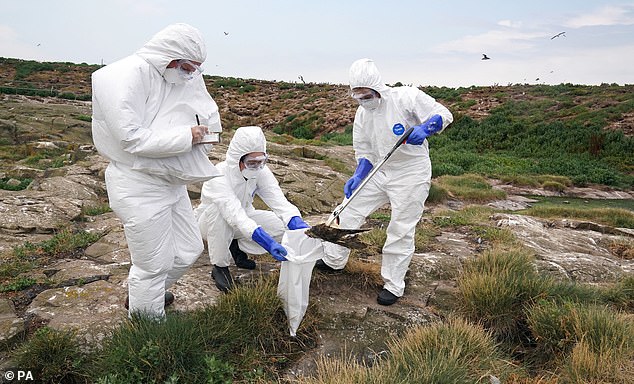 Pictured: The National Trust team of rangers clear deceased birds from Staple Island, one of the Outer Group of the Farne Islands, off the coast of Northumberland 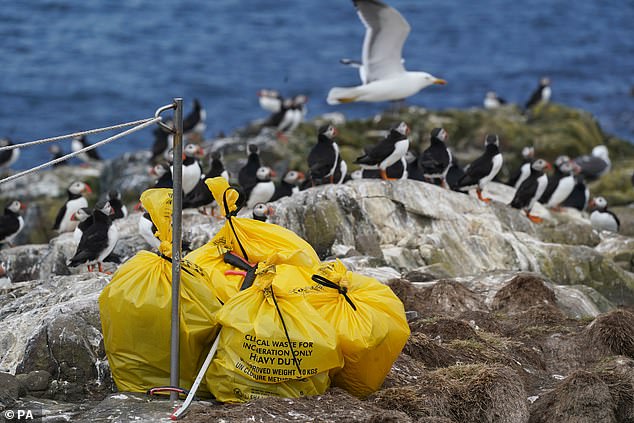 Pictured: Clinical waste bags containing the carcasses of deceased birds await removal from Staple Island, one of the Outer Group of the Farne Islands, off the coast of Northumberland

Yesterday, Dr Christine Middlemiss, the UK’s Chief Veterinary Officer, described a full-scale outbreak as an ‘ongoing worry’ that the Government is taking ‘seriously’.

So what about the rest of us? Should we be panicking?

Influenza has plagued humankind since at least the days of Hippocrates, the 4th-century BC Greek ‘father of medicine’ who recorded its characteristic fever, fatigue, coughs and body aches.

Over the centuries it became clear that the disease follows a distinct pattern.

Although flus are always deadly to some extent in the vulnerable, they are relatively mild most years. But every generation or so, a variant rages across the world, killing the young and strong as well as the elderly, frail and sick.

The last time that happened was in 1918. But experts say another devastating flu pandemic is long overdue.

All human flu, as far as we know, originates in birds, although it often passes through another animal, such as a pig, in the process of mutating and adapting to infect us. Wild birds are carriers, especially through migration. As they cluster together to breed, the virus spreads rapidly and is then carried to other parts of the globe.

New strains tend to appear first in Asia, from where more than 60 species of shore birds, waders and waterfowl, including plovers, godwits and ducks, head off to Alaska to breed and mix with various migratory birds from the Americas. Others go west and infect European species. 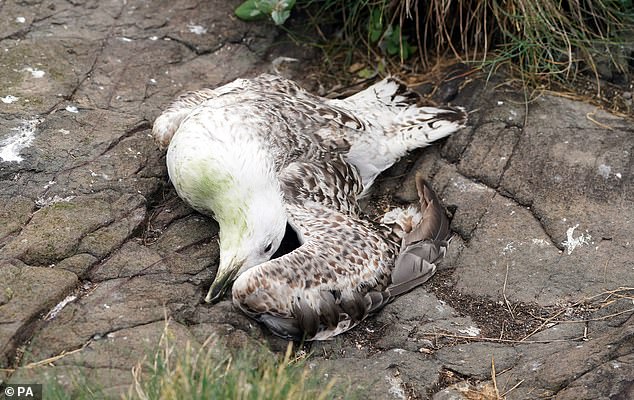 The National Trust, who care for the islands, have warned this number could be the ‘tip of the iceberg’ as cliff nesting birds, including guillemots and kittiwakes, will have fallen and been lost to the sea

Exposure to faeces and nasal mucus can also mean the virus is passed on.

Wild birds don’t usually suffer serious ill-effects themselves — but mass death does result when they pass the disease on to domestic poultry, especially in giant intensive farms.

So one unsolved mystery of the present outbreak is why and how this strain has altered so as to devastate its wild hosts, and what that portends. Scientists are calling it a ‘game-changer’.

Bird flu started causing renewed concern during an outbreak in May 1997, when it killed a three-year-old boy in Hong Kong. It had originated in the city’s insanitary ‘wet markets’, where a fifth of the chickens were infected.

In all, only 18 people caught the disease. But it required drastic action — slaughtering Hong Kong’s entire 1.5 million poultry population in just three days — to halt transmission and limit further spread to the human population. 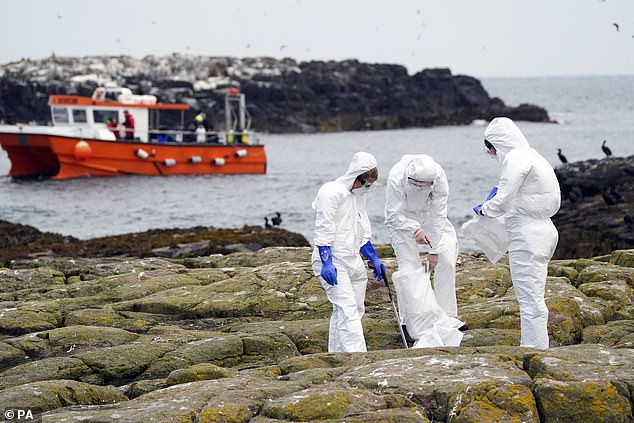 Alarm bells next rang eight years later in the sleepy, 400-strong Thai village of Ban Sri Somboon, when an 11-year-old girl caught the disease and passed it to her mother and aunt. Only the aunt survived.

That was the first time, so far as is known, this strain of the virus had passed from one person to another. Other instances followed in Thailand and elsewhere in Asia.

It sparked widespread concern that the overdue flu pandemic was about to begin. The strain killed almost three quarters of those it infected — ten times worse than in 1918 — and it hit healthy teenagers and young people especially hard. Experts warned it could become the worst pandemic since the Black Death in the 14th century. Britain’s official emergency body, the Civil Contingencies Secretariat, told the Government it was as great a threat as terrorism.

Ministers stockpiled 14.6 million doses of an antiviral drug and put mortuaries and emergency services on alert for 750,000 UK deaths. Thankfully, the great plague never took place. But the virus persisted in birds and went on evolving, in a different direction.

First, there were more serious outbreaks in poultry — occurring every year in Britain, instead of every few years as before. And it has gone on accelerating. So far this year there have been 125 outbreaks across the UK, compared with 26 in 2021. 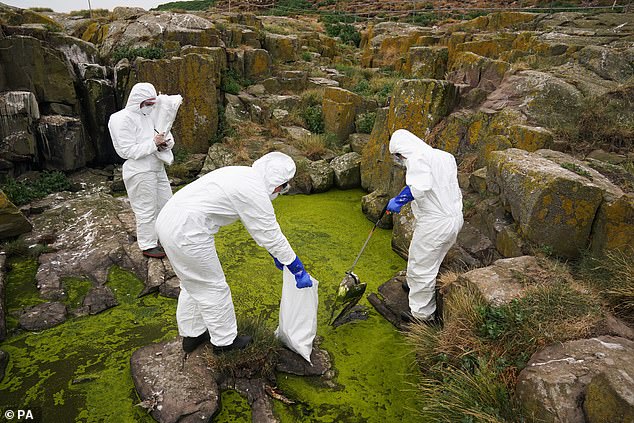 Yesterday, Dr Christine Middlemiss, the UK’s Chief Veterinary Officer, described a full-scale outbreak as an ‘ongoing worry’ that the Government is taking ‘seriously’

Millions of chickens have been culled and last November our poultry industry was put into lockdown, heavily affecting the availability of free-range eggs.

Records were broken elsewhere, too. France had almost 1,000 outbreaks last winter and Israel suffered ‘the deadliest wildlife disaster in its history’ when 5,000 cranes perished in December. There were also bad outbreaks in Asia.

The first sign it was affecting wild birds came in Stratford-upon-Avon in November, when dozens of swans and cygnets — up to half the town’s population — died. Then, in December, thousands of migratory geese perished in Scotland after arriving from Svalbard in the Arctic Circle.

But that was just the beginning. Now there are outbreaks from the Shetlands to the Channel Islands and many species have been hit.

One ecologist counted 72 dead birds from 17 species during a short walk in the Loch Fleet nature reserve in northeast Scotland.

The Government says that so far birds of 28 species have been found dead in 142 places in Scotland alone. Seabird colonies at Noss, Hermaness, Hoy, St Kilda, Troup Head, Handa and St Abbs are among those badly affected.

Surveys of great skua colonies have revealed 85 per cent declines in Orkney, Shetland, Fair Isle and the Flannan and Western islands, among other places. This has global implications, as most of the world’s small population of these birds breed only in Scotland.

On Coquet Island, Northumberland, every sandwich tern chick born in 1,964 nests died this year. On Scotland’s Bass Rock, home to the world’s largest population of northern gannets, there are large empty areas of what should be crowded land.

In the Farne islands, another of Britain’s most important habitats — normally visited by 45,000 people a year but now closed — thousands of seabirds including puffins, guillemots and kittiwakes have perished, while a quarter of the sandwich terns are sick. Workers wearing hazmat suits have been sent in to collect the bodies.

So what happens now? Vaccination offers some, albeit imperfect, protection to poultry in farms but cannot be used on wild birds because of the near impossibility of injecting them.

The big question is what will happen next year, when migratory birds have once again spent the winter together, presumably spreading the disease further. Does a future birdsong-free ‘silent summer’ await us? And, worse still, could we humans be next?