The ORIGINAL Best of the Best: From Lieutenant-Colonel who set up elite WWII unit to intelligence officer who created fake paratrooper regiment to confuse the enemy… the real-life heroes behind BBC’s SAS Rogue Heroes drama

For decades, the SAS has been well-known for being the British Army’s most elite band of men.

The fearsome trained killers have protected Britain’s interests wherever required – most famously in the 1980 siege of the Iranian embassy, when they rescued 24 hostages as millions watched on the television news.

But now, a new BBC drama re-tells the story of the previously top secret origins of the Special Air Service, which was formed in North Africa in 1941 by Lieutenant-Colonel David Stirling.

Along with key members such Paddy Mayne, Jock Lewes and Reg Seekings, Stirling led a force that existed to wreak havoc behind enemy lines during the Second World War.

They targeted dozens of airbases and destroyed hundreds of German and Italian planes.

SAS Rogue Heroes, the first episode of which airs on Sunday, depicts the real-life events that were revealed at great length by historian Ben Macintyre in his 2016 book of the same name.

Stirling, who was described by Britain’s most senior military officer as ‘quite mad’,  is played by Sex Education star Connor Swindells, with Jack O’Connell – who recently appeared in Lady Chatterley’s Lover – playing Mayne and Games of Thrones’ Alfie Allen depicting Lewes.

Mayne was infamous for his violent antics before war had even broken out, whilst his feat of tearing out the control panel of an enemy aircraft in one raid has gone down in SAS legend.

Lewes, an Oxford graduate, was known to practise parachute jumps by leaping from the back of speeding lorries, whilst intelligence officer Dudley Clarke – who gave the SAS its name – once created a fake parachute regiment and spread information about it to terrify Italian troops. Clarke is portrayed by Dominic West. 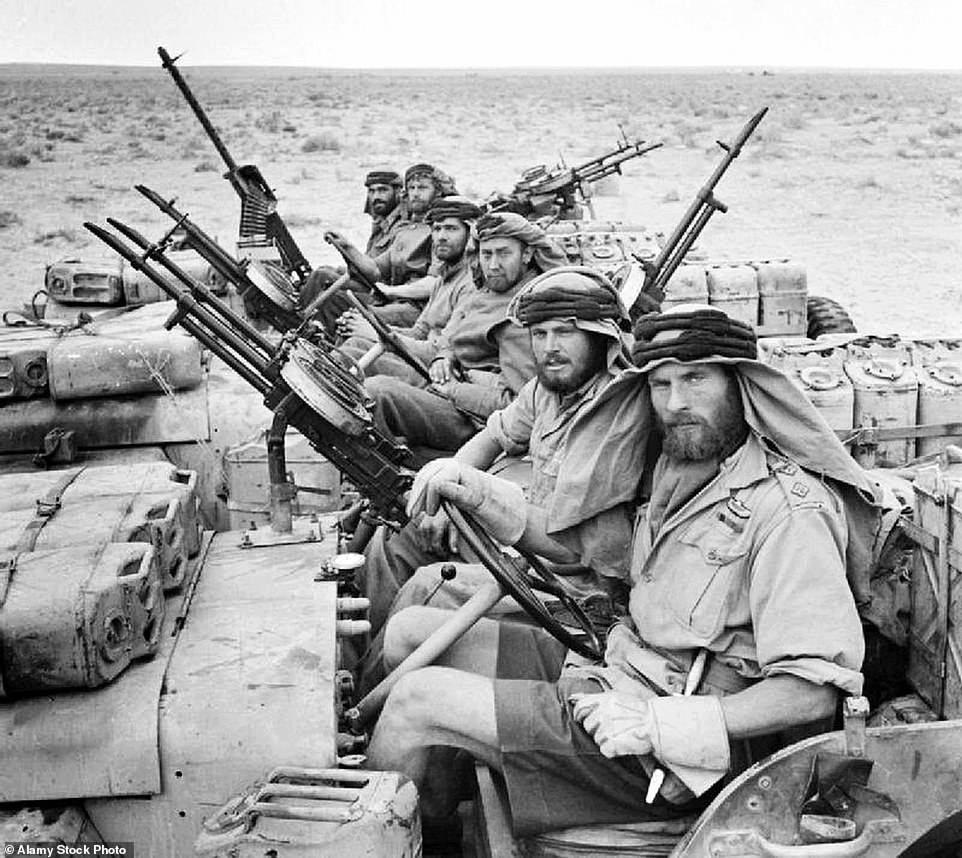 A new BBC drama re-tells the story of the lesser-known origins of the Special Air Service, which was formed in North Africa in 1941 by David Stirling. Along with key members such Paddy Mayne, Jock Lewes and Reg Seekings, Stirling led a force that existed to operate behind enemy lines – and did so with devastating effect. Above: Mayne (front) is seen with other SAS members during the war 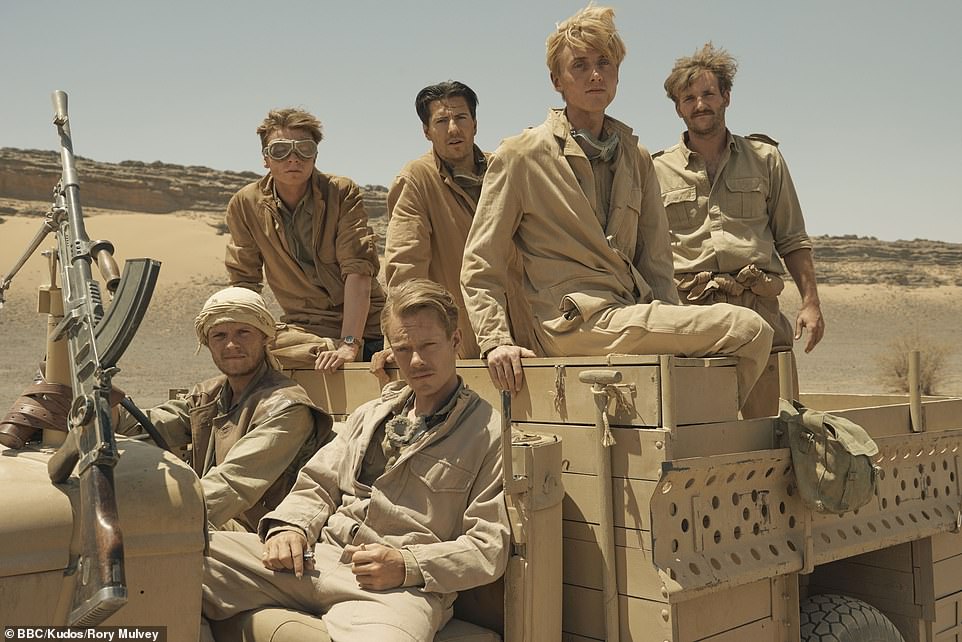 Stirling got the idea for the new elite regiment after witnessing the British Army’s drubbing against German military chief Erwin Rommel’s Afrika Korps in Egypt.

Given Britain’s plight on the battlefield in North Africa at the time, permission was given to Stirling for him to assemble his unit, which was made up of soldiers who had proven themselves to be fearless.

From the start, the elite unit was made up of as few as 100 men, all of whom had been trained beyond the standards of all other fighting men.

Others who were key to the inception of the SAS included intelligence officer Clarke who worked out of a converted bathroom in a British Army office in Cairo. He is played by Dominic West in SAS: Rogue Heroes.

Clarke was responsible for naming the unit, after creating the fake paratrooper regiment to worry the Italians about possible attacks.

He then agreed to work with Stirling if he would adopt the name Special Air Service for the regiment.

Many would-be recruits were rejected for not being tough enough. One had walked across the desert for 40 miles in only his socks after his boots fell apart.

Those who did make it were the men willing to kill with guns, knives and even their bare hands without a moment’s hesitation. 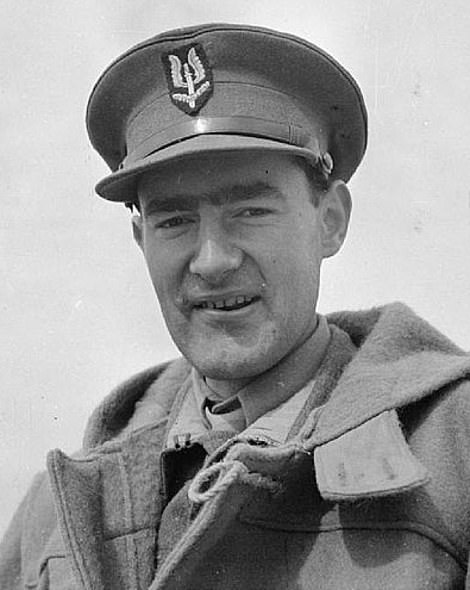 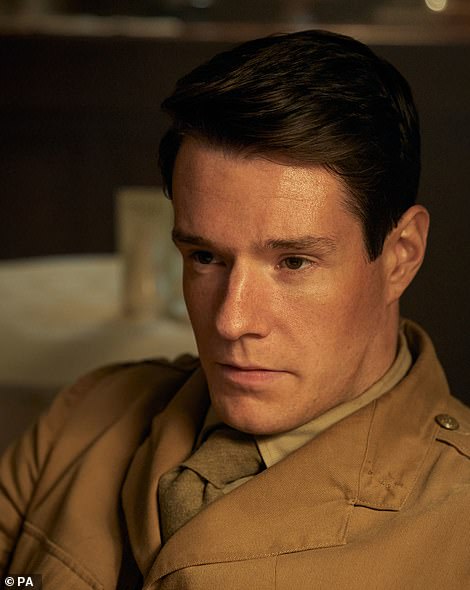 Stirling (pictured left in 1942, and depicted right by Connor Swindells) got the idea for the new elite regiment after witnessing the British Army’s drubbing against German military chief Erwin Rommel’s Afrika Korps in Egypt 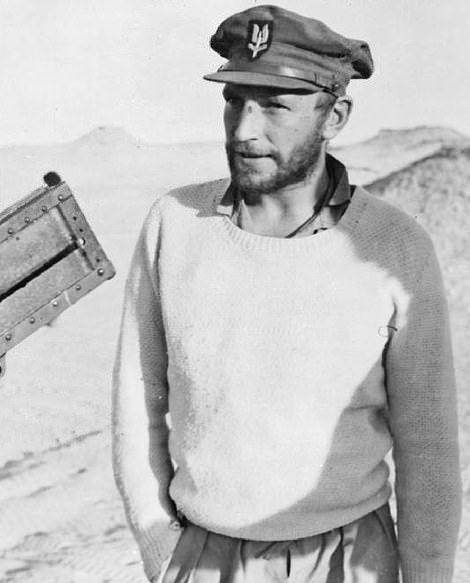 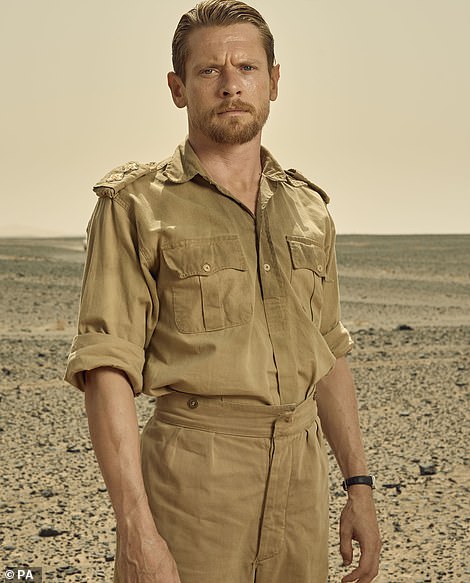 Lieutenant Colonel Robert Blair ‘Paddy’ Mayne was another original member of the SAS. He is portrayed in SAS: Rogue Heroes by Jack O’Connell 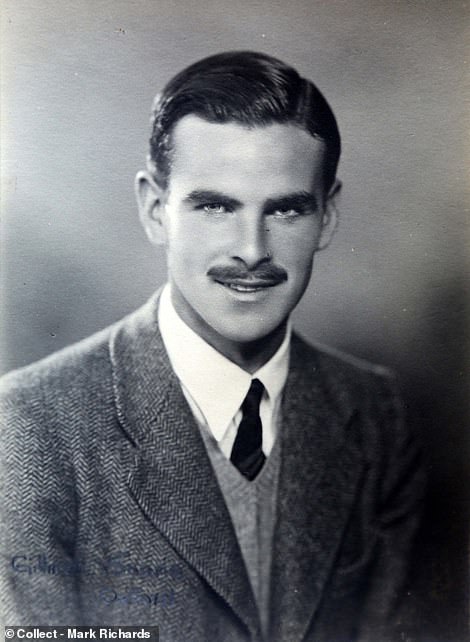 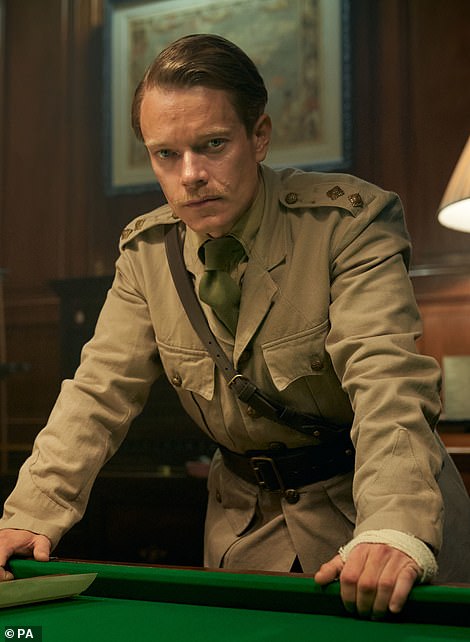 Jock Lewes was a Philosophy, Politics and Economics (PPE) graduate from Oxford. Game of Thrones star Alfie Allen depicts him in the new series. He was among the small group of volunteers chosen by Stirling to form the original SAS 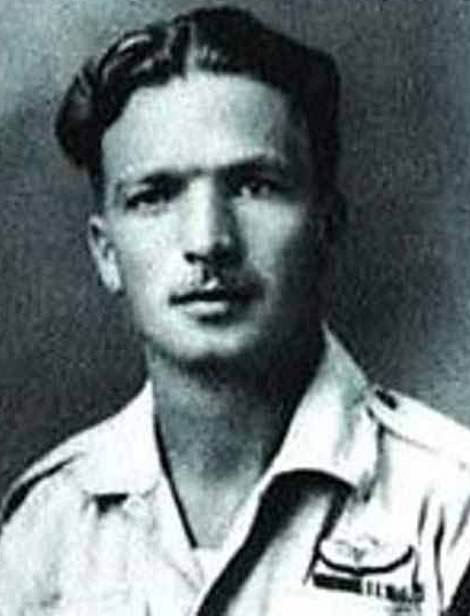 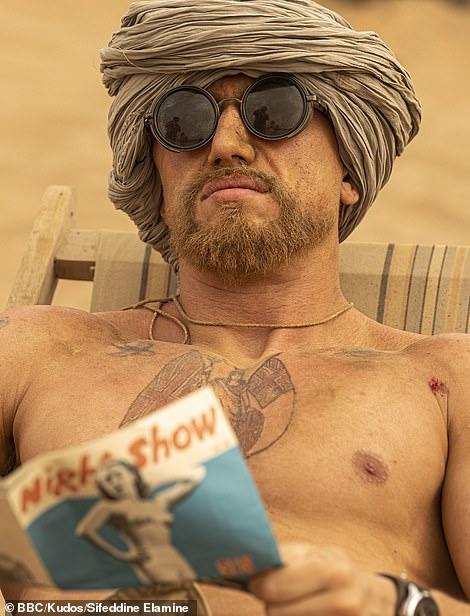 Reg Seekings was another of the original SAS members. He took part in the unit’s first raid, which proved to be a disaster as only 21 men returned out of the 64 who had originally jumped. He is portrayed by Theo Barklem-Biggs in the new series 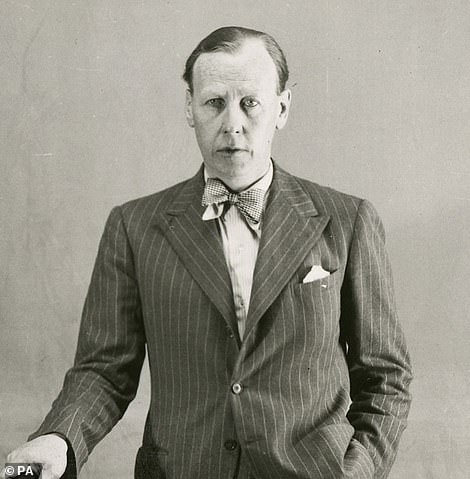 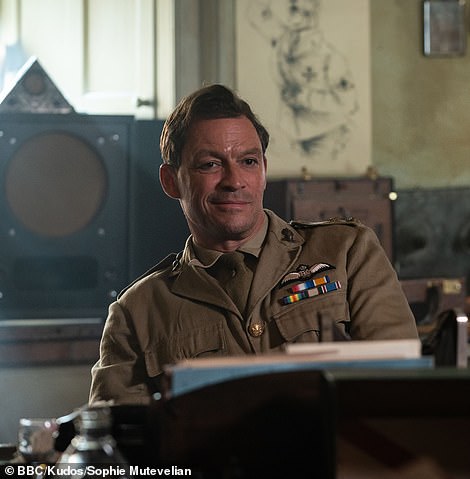 Others who were key to the inception of the SAS included Dudley Clarke, an intelligence officer who worked out of a converted bathroom in a British Army office in Cairo. He is played by Dominic West in SAS: Rogue Heroes. He is pictured left in 1941 in an infamous series of photographs in which he was seen dressed as a woman and also in a suit

Their sabotage missions would see them trek up to 300 miles across seemingly unending desert before sneaking into German and Italian air bases and blowing apart parked planes.

Stirling’s biggest success came in July 1942, when his SAS squadron raided the Sidi Haneish airfield in German-held Egypt. A total of 37 Axis aircraft were destroyed, with only one Allied soldier killed.

But Mr Macintyre’s book does also reveal how the SAS’s contribution to Britain’s victory in the war was actually not that significant.

Instead, the consequence of eye-catching raids that did short-term damage to the enemy was a high casualty rate and the use of resources that could have been used elsewhere.

Even the SAS’s first raid proved to be disaster, with the men failing to achieve a single hit on the enemy. Instead, 34 of those who took part were killed, injured or missing, with only 21 returning to base.

Stirling was captured by the Germans in January 1943 after yet another raid. Although he did initially escape, the officer was re-captured by the Italians and, despite another four attempts to get away, he was imprisoned for the rest of the war at the infamous Colditz Castle.

General Bernard Montgomery was among senior officers who initially did not look kindly on the SAS. He described Stirling as ‘mad, quite, quite mad’.

The unit were however elevated to full regimental status in the British Army after Randolph Churchill, the son of Prime Minister Winston, joined a mission to Libya and reported back to his father with a glowing review of the raid. 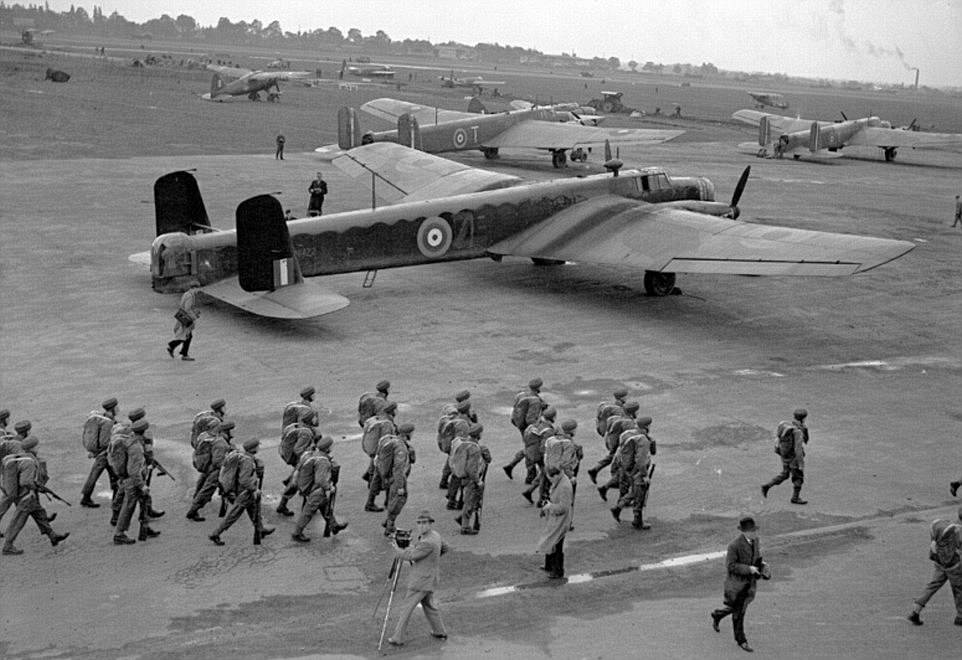 Members of the SAS are pictured in training in 1941. Men who made it into the SAs were those who were willing to kill with guns, knives and even their bare hands without a moment’s hesitation 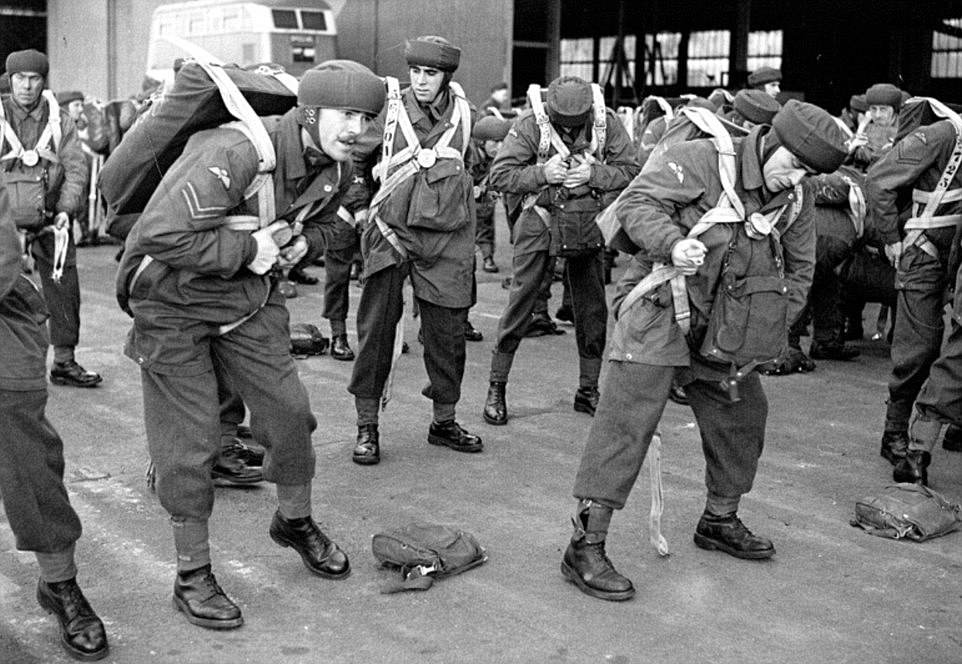 Members of the SAS are pictured here ahead of practice jumps at Manchester Airport, then known as Ringway, in 1941 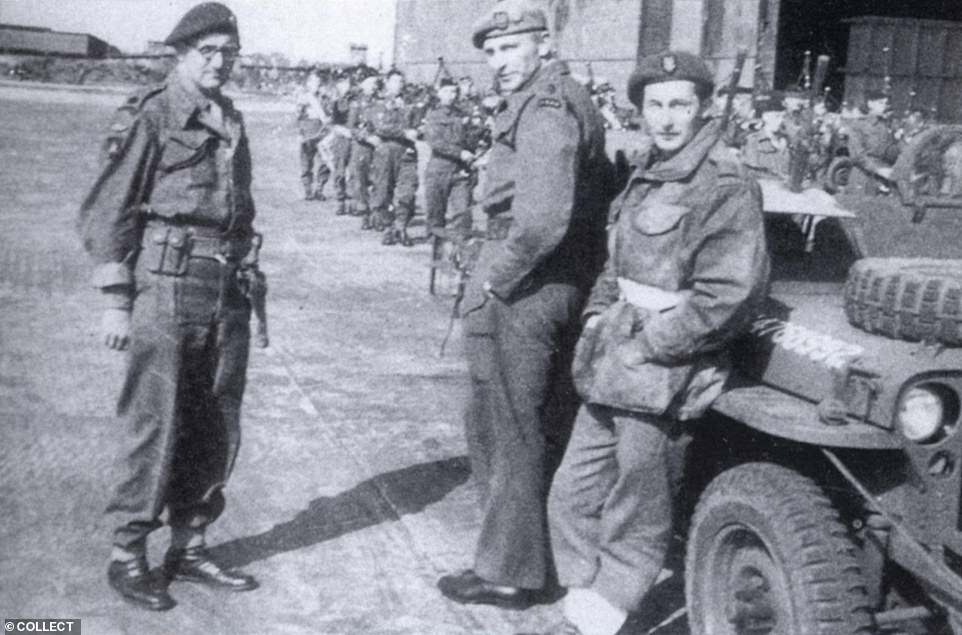 Once they were made a formal part of the army, they had to give up their sand-coloured headwear and instead don the red berets of paratroopers.

After Stirling had been captured, Mayne took up command of the SAS and the unit continued operating throughout the rest of the war.

Beyond North Africa, they worked to orders in Italy, France and Germany.

In the latter, they helped ease the final Allied advance in 1945 by destroying Nazi communications, collecting intelligence and training Resistance fighters.

However, there too they sustained horrendous losses as Hitler’s feared SS carried out his Commando Order to execute British saboteurs whom they caught.

After the war, the unit was disbanded, with its ongoing existence not deemed to be necessary. But bosses changed their minds just two years later and the SAS were among those sent to fight in the Korean War.

In writing his book, Mr Macintyre had access to a 500-page ‘war diary’ compiled by the SAS’s archivists. It was a gold mine of first-hand reports from men who took part in successive secret operations from 1941 until 1945.

Stirling, an aristocratic Scots Guards officer, was aged just 25 when the SAS came into being. The soldier was known for his heavy drinking and frequent disobeying of orders.

The new six-part drama has been created by screenwriter Steven Knight, who was behind the hugely popular series Peaky Blinders. 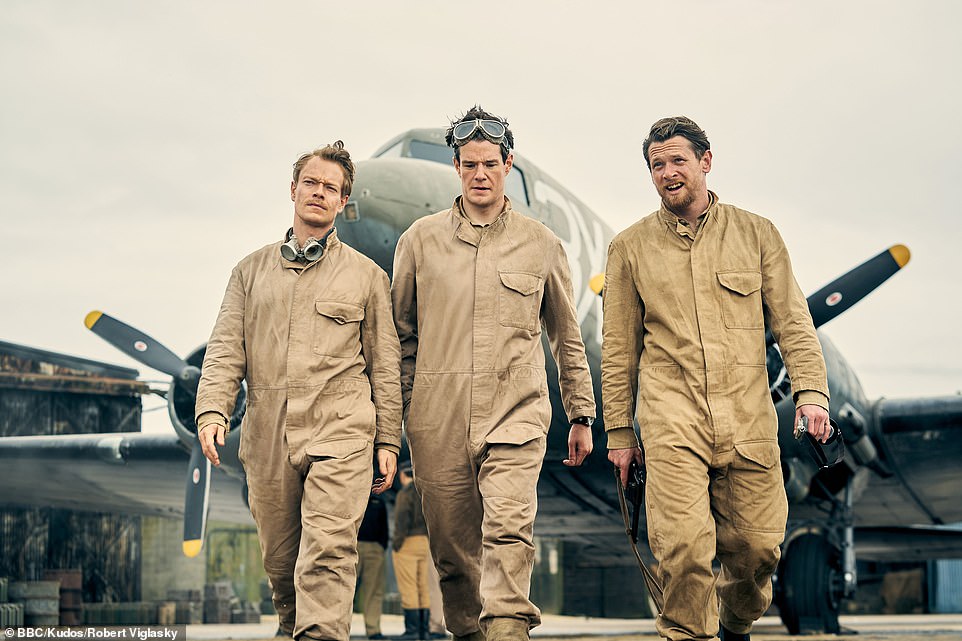 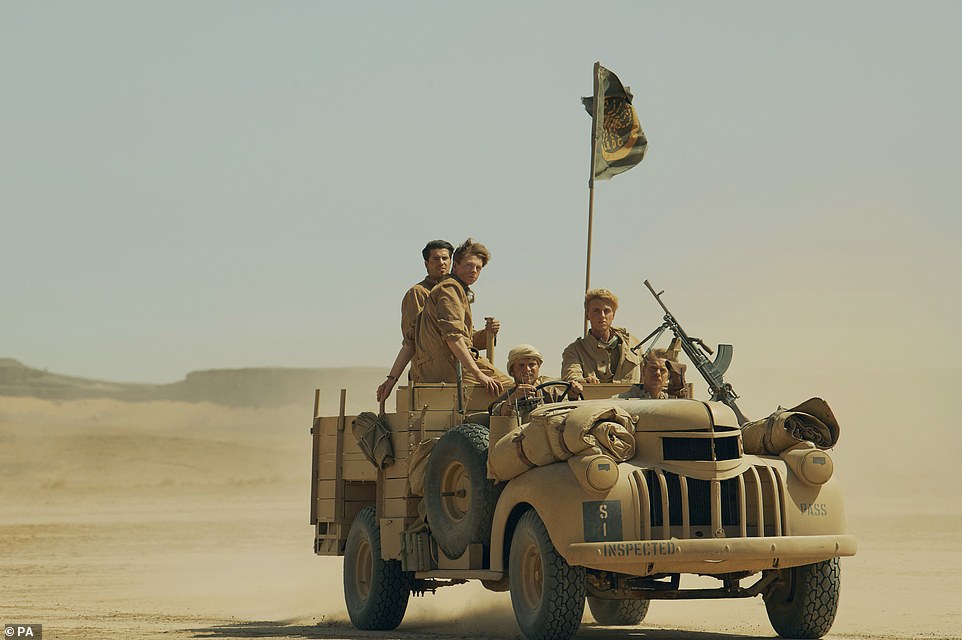 Looking back: The series shows how the SAS were formed in North Africa during the Second World War 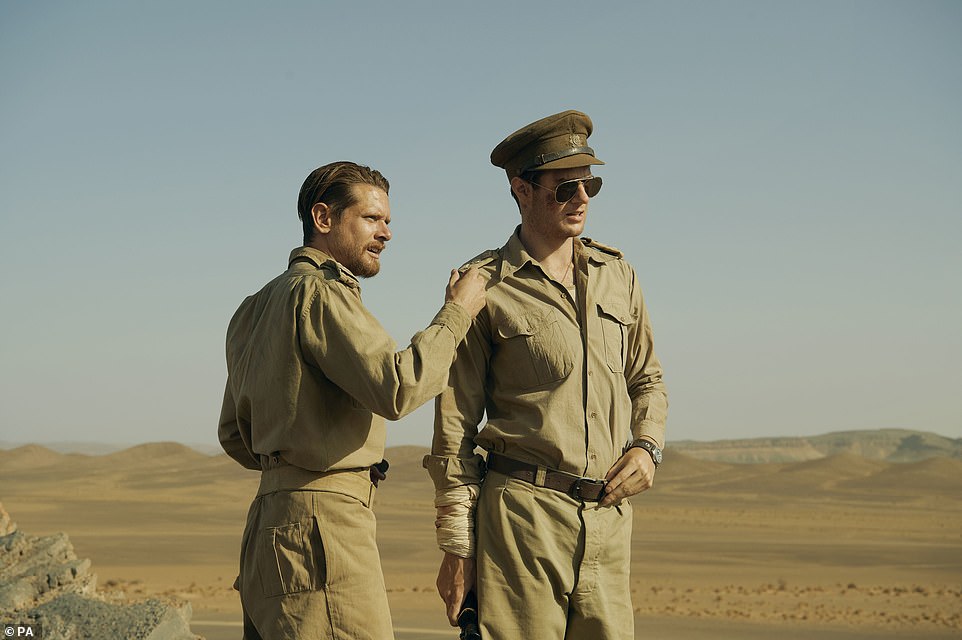 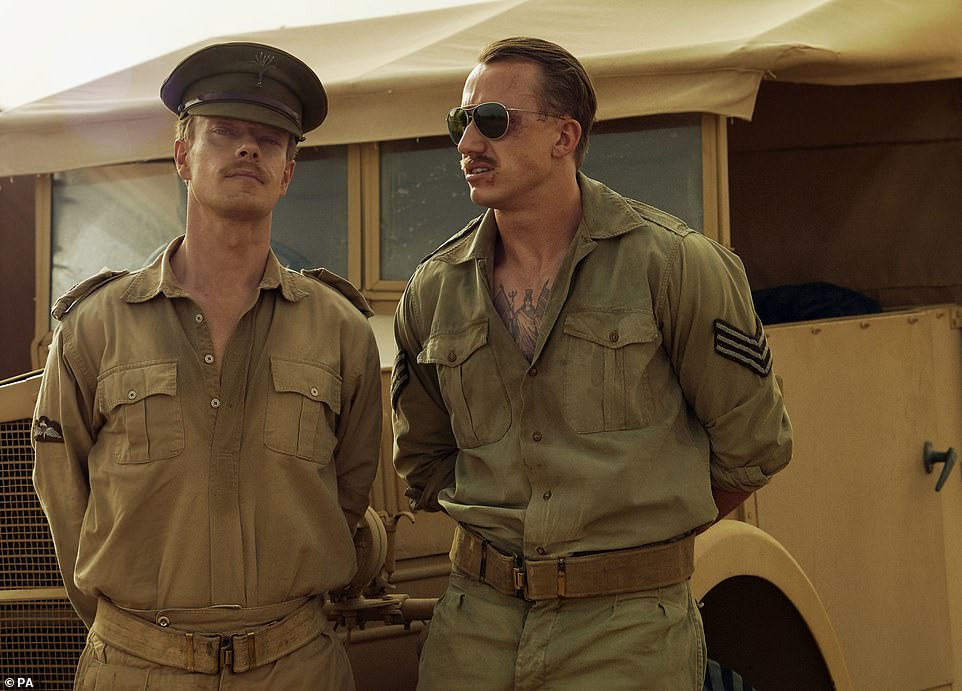 Alfie Allen’s Jock Lewes poses next to Theo Barklem-Biggs’s Reg Seekings. Seekings was among the men on the SAS’s first ever mission

Speaking on a panel for the show’s premier at the British Film Institute this week, Knight revealed how he chose to exclude some of the astonishing exploits of Sterling and his men, due to the fact that they would not be believed by viewers.

On one occasion, Stirling threw a real hand grenade into a bar in Paris so he could clear the room, according to Mike Sadler, 102, who is the last surviving member of the SAS.

But the depiction of the terrifying moment on screen is toned down to make it more convincing.

‘He [Sadler] told me the story that he and Stirling were in a bar in Paris and somebody said “you can’t use this table, we are using it all night”,’ Knight said, according to the Telegraph.

He added that he had to change the depiction of other real-life events ‘many times, so many times’ for the same reason.